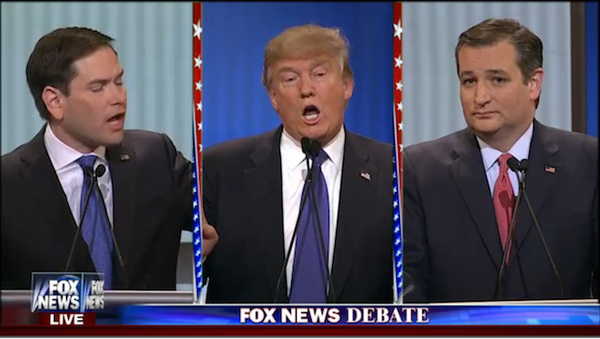 Who Won the Debate, a Critique

The Republican Debate, Cruz had a great night, Kasich had a good night, Rubio was ok, and Trump was tired and vulgar.  Cruz’s summation of what has happened to Detroit under 50 years of failed Democrat policies was excellent. Frank Luntz’s focus group and the audience loved it.  Rubio talked about yoga and  was suffering from a cold/flu.  Rich Lowry has a good piece about the debate here.  He described Trump’s performance:

Trump was completely appalling–rude, crude, dishonest, ill-informed, non-sensical, evasive, out of control, and even disturbing. I’m thinking in particular of his repeated assurances that he will bring the military to heel and make it obey unlawful orders. This was Trump at his worst, although past debates have established that outrageousness doesn’t hurt him because for his supporters it’s part of his appeal.

Who Won the Debate, a Critique was last modified: March 4th, 2016 by Jeanine Martin

Trump is really plumbing the depths of Evil, especially last night. He’s disgustingly depraved. Anyone who says they are going to target the FAMILIES of ISIS members is every bit as bad as the enemy. Remember when we used to argue over whether waterboarding was torture? Well trump says it doesn’t go far enough.

If Trump wins and carries out what he’s currently advocating, America will no longer be the good guys. Trump has long since been shown to be a fake conservative. But now he’s come out as a real tyrant. Trump supporters need to wake the hell up. This man has openly advocated doing away with free speech, and now basic human rights and decency too. We cannot sink to the level of ISIS, or any victory will be meaningless.

Whatever problems the GOP has–and it sure does have them–Trump is worse. We can survive a Hillary Administration. She’s continue to pursue Obama’s liberal agenda, but the Republicans will retain Congress, and Hillary will be a weak President at best.

Trump on the other hand will annihilate the conservative movement, and rally the liberals against him (and rightfully so considering the evil totalitarian positions he’s staked out). The democrats will take back Congress in two years, and the white house in four. By the time the right regains it’s composure, America will be unrecognizable.

Actually the one who looked tired and sweaty was Rubio. Maybe someone will find the time to question Rubio’s own finances as well as the investigation into the use of the Florida Republican credit card fo personal us. Rubio seems to have difficulty managing his own finances and abusing credit cards a the tax payers expense.

Maybe this will come out eventually. He is consistently behind in th polls and ineffective at this point in the race.

He is the only candidate who is can be behind in the polls and still acts like he is in the lead.

Rubio had the flu, there’s a good reason he looked like that.

You obviously don’t get it. I’m speaking for no one but myself. I’m sick and tired of the same ‘ole crap coming from the GOP both state and national. The r’s gave us 2 of the largest tax increases in VA’s history, one with a convicted felon R gov and legislature. In congress they do nothing, they say one thing and do the other. I’m for trump and I hope he breaks the back of the GOP so we can start all over. the GOP needs a big oil change and a new battery. Trump brings a breath of fresh air.

You speak for me too, and very well I might add. I also want Trump to BREAK the damn GOP. And he’s the only one who’s man enough to do it, because he’s a fighter! Trump is leading Americans to reclaim OUR party back from the corrupted and power-hungry Elites/big-business/corporate-cronies/RINOs. #MakeAmericaGreatAgain

Fighters don’t proclaim that they can order our soldiers to commit war crimes.

I hope you realize Dick Black was pushing to give the Waterford Foundation $200,000 of our tax dollars. They can’t budget themselves, so he spends more of our money. And, he used to suggest he was pro-property rights and pro liberty. More double talk and spending. Check out loudountaxpayer.com