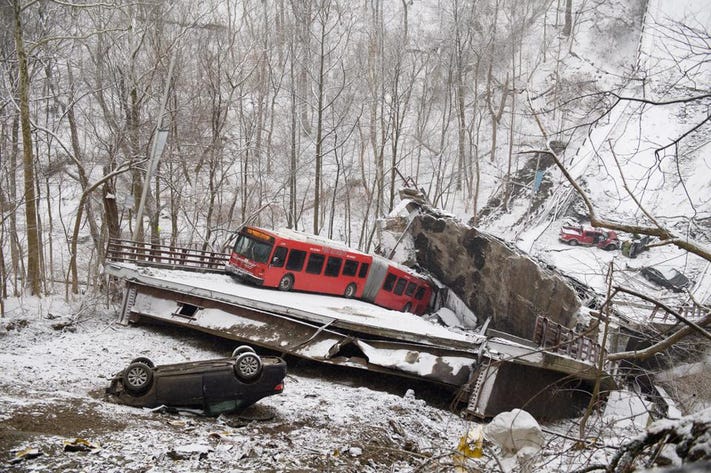 Why do we always let the “Swamp” win?

The Brandon Administrations’ chief legislative victory is the $1.2 trillion Bipartisan Infrastructure Law.  Well, you say, we certainly do need to repair rusty bridges like the one that collapsed in Pittsburgh recently, and build or expand highways to relieve traffic congestion, don’t we?  We do.  But when Congress provides funds for “bridges and highways,” those funds don’t go directly to local agencies or state highway departments.  They go to the Department of Transportation’s Federal Highway Administration (FHWA), which then “awards” grants of funds to those agencies – after, of course, they have complied with all federal rules, interpretations, and preferences.

With Transportation Secretary Pete Buttigieg and other Brandon appointees running the Department of Transportation, the projects selected for funding will emphasize “green” objectives and penalize driving.  The Wall Street Journal recently reported that FHWA Deputy Secretary Stephanie Pollack sent staff a memo on how to select projects for funding.  Surprise!  Projects that “add new general purpose travel lanes serving single occupancy vehicles” receive the lowest ranking.  How many new roads and bridges do you get in the $1.2 trillion bill?  Zero!

For a more complete discussion of how Brandon appointees are stepping up to prevent actual infrastructure spending going to roads and bridges, read the excellent Grumpy Economist piece here.

To get really get into the weeds, the FHWA memo can be found here.

The bill included provisions to limit the endless environmental review that is used to block projects.   How did FHWA interpret those provisions?  A project that requires a new right-of-way is ineligible for a fast-tracked National Environmental Policy Act (NEPA) review! If you want to build a new highway, or expand an existing one, you are likely to face years of additional cost and delay, undermining the clear intent of Congress.

However, fast environmental review will be allowed for “bicycle and pedestrian lanes, paths and facilities, resurfacing, rehabilitation or reconstruction of grade separations.”   Fast track review will not be allowed for projects that “have significant impacts to travel patterns.”  Got that, no highways that have a significant impact on travel patterns!

What I would like to emphasize is that the bureaucracy, led by “progressive” appointees, can, in effect, rewrite legislation to suit their purposes by issuing regulations, policies, and other less obvious measures that support their goals.  In the $1.2 trillion infrastructure bill only $150 billion was for roads, bridges, and investments in other major transportation programs.  After looking at FHWA plans for administering those funds, how many highway expansions do you think we’ll see?  Republicans who voted for this “bipartisan” bill certainly got snookered or aren’t really on our side.  This November we must be sure to elect Republicans to Congress who realize that just passing bills for things that “sound nice” will not get the job done.  They must hold appointees and agencies accountable.

Why do we always let the “Swamp” win? was last modified: February 15th, 2022 by Guest Poster Rob Martin

The Swamp wins because 1) The American press corps is a failure; 2) There are no clear metrics that simply show the American public how badly governments spends money; 3) Politicians have been able to hide their bad decisions through the accumulation of public debt (i.e. if we had to actually pay for public spending with increased taxes, people would be howling mad.)

The President’s name is Biden, idiot

That’s funny because the idiot’s name is Biden too. What a coincidence!

The “idiot” would make you look like a mental midget on his worse day. Probably smoke you shootin’ hoops, too

I am still suspicious that the bridge collapse just “happened”on the very day that China Jo Xi Den was due to visit Pittsburgh to talk about, wait for it, roads and bridges. Quite a convenient “coincidence” No?

Crognale lives under a bridge, so he would know — but only if it is outside Virginia, with which he has no connection at all.