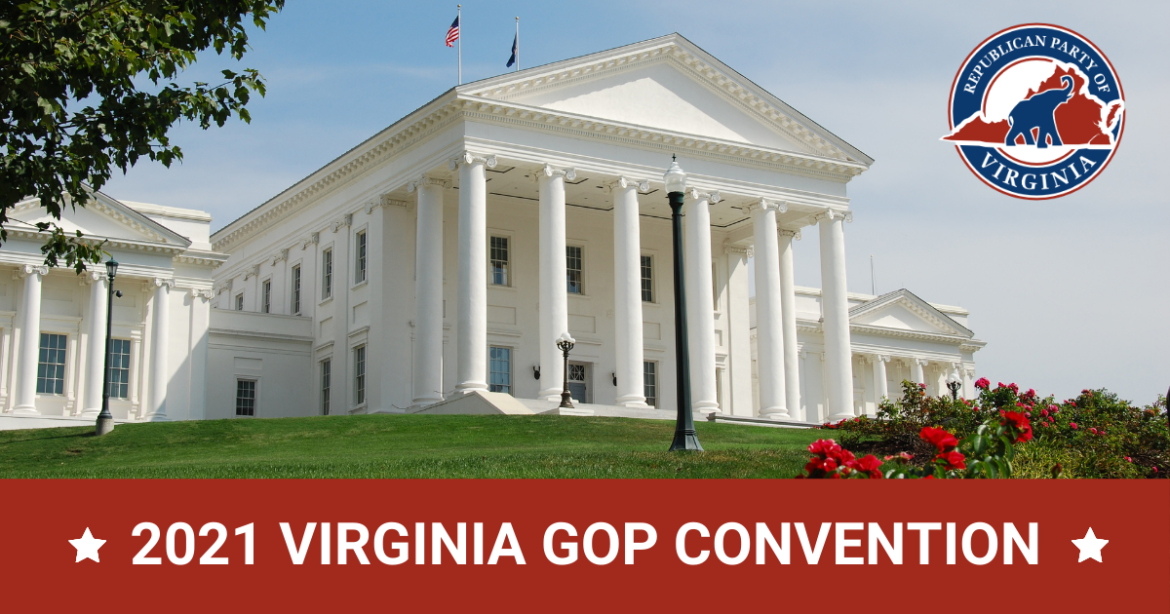 Analysis and Predictions for the GOP for Saturdayâ€™s Nominating Convention

On Saturday, May 8, up to 53,000 Virginia Republicans who pre-registered as delegates will nominate candidates for state-wide offices in November, including governor, lieutenant governor and attorney general.

Itâ€™s been a long time coming.

The nominating process for Republicans, an unassembled convention with about 40 voting locations across the Commonwealth â€“ open for voting from 9:00 AM-4:00 PM â€“ is a convoluted and confusing affair that took months to negotiate and consummate after numerous marathon and agonizing Zoom calls by the Partyâ€™s State Central Committee.

The battle inside the Party pitted convention enthusiasts vs. primary advocates. All of the top four candidates for governor had a distinct nomination preference, which they believed would benefit their chances. Their supporters on the state central committee made the nomination method and their corresponding rules difficult to cement.

The good news for Virginia Republicans, who have lost 13 state-wide races in a row by ever-increasing margins, is that thanks to State Senator Joe Morrissey (D-Richmond), the Virginia General Assembly passed a law this year to effectively ban Party nominating conventions for public officeholders starting in 2024.

Ironically, Morrissey, a Democrat, saved Republicans from themselves.

Republican officials a few weeks ago voted to hand-count all the ballots â€“ in lieu of any electronic vote counting software â€“ which will delay the results. GOP ballot counters are expected to start counting ballots that will be delivered in a secure fashion around the state to one central location in Richmond on Saturday night, and counting is scheduled to commence on Sunday at 1:00 PM. Naturally, all candidates and their respective campaigns have assigned surrogates who will oversee the ballot counting process to insure maximum voting integrity.

The order of ballot counting is attorney general, Lt. governor, and governor. The final results are not expected to be released until Tuesday or Wednesday of next week. AG results may come late Sunday night.

The voting is based on two variables: ranked choice and weighting, which makes polling or handicapping the final results nearly impossible.

On ranked choice, voters are asked to vote their ranked preference, one to seven for example in the governorsâ€™ race. But a delegatesâ€™ second or third choice only comes into play if their candidate is eliminated. The first ballot threshold is 10 percent: all candidates who fail to achieve 10 percent of the first-choice votes are eliminated. Once that occurs, their second choice will add to the first-place total of the remaining candidates. If their first two choices are eliminated, their third choice will be added, and so forth. Remaining candidates get eliminated one by one, until we get the final two in a winner-take all face off. All second-choice ballots are only counted once. In other words, a candidate vote total can never go down, only up.

One gubernatorial candidate has called on voters to â€œsingle shotâ€ vote â€“ or only vote for first choice. This is asinine as it has no impact on the race and diminishes that delegateâ€™s ability to ultimately choose the nominee. Also, the idea of voting for one candidate all seven times, or first and second for example, is an equally bad idea, as the rules call for that ballot to be disqualified entirely. No doubt some voters will do this, to their preferred candidateâ€™s peril.

53,000 delegates have signed up to vote on Saturday, an astonishingly high number. A significant number of these delegates have been signed up the by Glenn Youngkin campaign, whoâ€™s field staff includes about 150 full-time political workers who are paid on average $5,000 per month. This has never been done. Ever. The question for Youngkin is: how committed are his delegates who his team signed up, and can his gameday operation get them out to vote? There is no absentee voting â€“ you either show up Saturday or you donâ€™t vote.

Of the 53,000 delegates, only 15,000 have ever voted in a Republican convention, so this is the hard number and the most committed potential voters.

In addition, 40 percent of the delegate pool has never voted in a Republican primary. This begs the question: is this a sign of a GOP resurgence in Virginia, or merely phantom delegates who were signed up in a door-knock effort and couldnâ€™t care less about Saturday. Thatâ€™s 21,000 delegates who have never voted in a primary, let alone a convoluted drive-by convention. Many of these are Youngkin delegates on paper. Will they actually show up on Saturday? If they do, Youngkin will win. If he gets 15 percent or less of the new delegates heâ€™s likely eliminated before the last round. Itâ€™s a game-day turnout effort.

Of the remaining 60 percent of delegates:

So, if 80 percent of the previous primary voters show up, and 15 percent of the new voters come out, the candidates will have a pool of 20,750 delegate votes. When you factor in weighted voting and ranked choice, this is impossible to handicap. Iâ€™ll give it a shot based on a turnout model.

If the total turnout is 17 percent or less (9,000) State Senator Amanda Chase could actually win, as her core voters are the most committed. This is an unlikely scenario. As the vote base goes up, her percent goes down and sheâ€™s not a lot of delegatesâ€™ second choice. Chase, once the front-runner, is now a long-shot who hopes no one turns out. Not a model for success.

A turnout of 18-25 percent favors former House Speaker Kirk Cox, who has a loyal base of voters and has made an impassioned plea for second place votes. Cox has a pathway to victory, albeit somewhat narrow.

If the delegate turnout approaches 25-45 percent, businessman Pete Snyder becomes the overwhelming favorite to win, as his team is credited with signing up the most committed delegates who have a highest propensity to vote on Saturday. If the delegate base turnout is 15,000 to 25,000, Snyder will likely be the nominee.

The wild card is the Youngkin vote. His machine is the biggest, and if the turnout exceeds 50 percent+ it means his delegates have gotten to the polls and he will be tough to beat. If 35,000+ voters show up on Saturday, Youngkin becomes a juggernaut. But thatâ€™s a big if, when 21,000 of the delegates signed up have never voted in a GOP primary. Youngkin is said to have added 90 field staff for game-day turnout, which means he has 150 campaign workers, as noted above, charged with getting his supporters out to vote on May 8. Thatâ€™s an enormous ground game. This is impossible to handicap. Youngkinâ€™s campaign manager, former House of Delegates candidate Garrison Coward, who served as U.S. Rep. Rob Wittmanâ€™s political director for eight years, has run an impeccable campaign. But so has Nathan Brand, Snyderâ€™s campaign head and Matt Moran, Coxâ€™s chief campaign director- all three have played error-free ball and did what they have to do to win.

The Lt. Governorâ€™s race is a three-way battle â€“ too close to call between Glenn Davis, Tim Hugo and Winsome Sears.

For Attorney General: Jason Miyares is the front runner, but Chuck Smith is closing. Smith has 3,700 small donors and has a lot of grassroots support. The big surprise though is Chesterfield Supervisor Leslie Haley, who is running way ahead of what pundits first thought. The key to this race may very well be Haleyâ€™s second choice votes, who may very well determine the outcome of this race if she is eliminated on the second ballot.

John Fredericks is the publisher and editor-in-chief of The Virginia Star. He is also the host of The John Fredericks Show weekdays on NewsTalk WJFN 100.5 FM and 820 AM.

Analysis and Predictions for the GOP for Saturdayâ€™s Nominating Convention was last modified: May 7th, 2021 by Guest Contributor John Fredericks