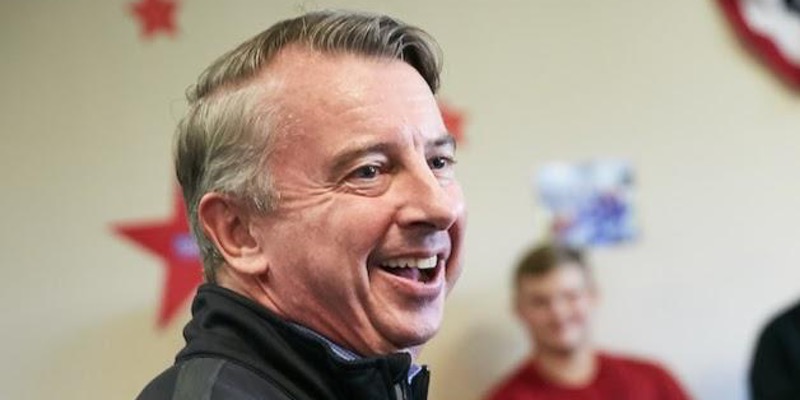 The “real story” of the June 13 statewide primary was not just the close race between Ed Gillespie who prevailed for the Republican nomination and Corey Stewart, the Prince William County Board chairman challenger – but how low the turnout was for the Republican primary versus the Democrats.

Statewide, there was 47% increase in voter turnout in the Democratic primary vs. the Republican primary.

The margin of Democrat turnout in the three major vote-rich counties of Northern Virginia, Fairfax, Loudoun and Prince William, was greater.

Indeed, the Democratic gubernatorial candidates were spending nearly three times on media than Republicans, according to two articles, and that could have been a factor.

Northam has spent almost twice as much money on TV ads as Perriello, his Democratic rival, in recent months — $3.7 million to $2 million, according to a source tracking media spending in Virginia. And Northam entered June with nearly twice as much money to spend over the last two weeks of the race, according to newly filed campaign finance reports.

This means some $5.7 million was spent on media, alone, in the Northam-Perriello contest

According to the Virginia Pilot, Gillespie, Stewart and third place finisher Frank Wagner spent about $2.3 million.  The paper reported:

Gillespie, the former Republican National Committee chairman, spent more than $1.6 million between April and June. …State Sen. Frank Wagner of Virginia Beach spent about $250,000 in the past two months and …Corey Stewart, chairman of the Prince William Board of County Supervisors, had spent about $400,000 in April and May.

Perhaps the greater media spending contributed to the lopsided Democratic turnout.  However, let’s not ignore changing demographics in this state, particularly in vote-rich Northern Virginia.

In November, I was the top-vote-getter among seven candidates running for the Leesburg Town Council.  Leesburg has about 28,000 registered voters and nearly 52,000 residents, and is often a bellwether for state and national elections.

I truly believe my name recognition and record serving Leesburg since 2006 on both the Council and Board of Supervisors contributed to my win.  However, in knocking about 2,000 doors in Leesburg for my campaign and the Trump/RNC effort, and speaking with more voters than that, I saw a trend whereby a number of new voters would not consider voting for me, nor Rep. Barbara Comstock, who happened to win Leesburg handily in 2014.  In her 2016 race, she lost Loudoun by 165 votes to a no-name Luann Bennett, largely due to the anti-Trump sentiment I saw early on in my canvassing.

These new voters were going to vote straight Democrat because that’s what they were accustomed to doing.  Many of these were not minority voters, but new white voters who had just moved to Leesburg from Northeastern states.

We also had a Republican-endorsed mayoral candidate who served two terms on the Council, facing two well-known Democrats, one running with the local party endorsement, and the other running as an independent.  The theory was the two Dems would divide the vote, but that did not happen.  The candidate backed by the Loudoun County Democratic Committee won convincingly.

The reality is that Northeasterners are flocking to Virginia and combined with the growing non-white population, this is contributing to the Democratic base.  I do not believe the Democrat advantage is all due to “illegals” voting, but growing populations of folks from the Middle East, India and other Asian nations.

The Gillespie-Stewart contest is worth noting in how name recognition and having a geographic base helps a candidate.  Despite the fact Ed Gillespie was endorsed by five of Corey Stewart’s GOP supervisor colleagues, Stewart won the county handily and came within a hair of winning Loudoun – most likely due to name recognition.  He is in his third term on the County Board.

Sen. Jill Vogel, who won the Lt. Governor nomination, was aided greatly in Loudoun, which is part of her political base. She garnered nearly 64% of the vote.

The election also shows how candidates on the “right side” of hot-button social issues can sway the conservative GOP base to vote for them.

While columns on this blog ridiculed Corey Stewart for cozying up to supporters of Confederate battle flags and monuments, the reality is that in a low-turnout primary, he got that vote and almost won with the nomination with it.  His unabashed support for Trump, even after being fired as his state chairman in October, helped, too.

In the Lt. governor race, Bryce Reeves, who was Vogel’s main challenger, played up her votes for a gay judge in mailers.  She was swamped in conservative precincts with many “values voters,” who oppose homosexuality.  He came close to winning and chances are had Glenn Davis not been in the race or if we held a convention to nominate candidates, he’d be on the ticket now – perhaps with Stewart.

In a 2nd part of this column, I will discuss a possible means to achieve a repeat of the 2009 “McBollinelli” sweep with Bob McDonnell, Bill Bolling and Ken Cuccinelli – that being getting more rural voters to get registered.

[…] But given how well the Democrats did, it is very apparent that we in the GOP still have our work cut out for us to make inroads into these areas.  And, the narrow wins Republicans had in Virginia Beach, Chesapeake and Chesterfield should be a wakeup call.  Democratic voters continue to vote their sample ballot.  The demographic shifts in Virginia are real, and the GOP has ignored it for years to its detriment.   […]

Reply
Governor’s race could come down to libertarian spoiler – The Bull Elephant September 20, 2017 at 10:27 pm

[…] New Jersey political dynamics, of course, are different than those of Virginia.  In Virginia, the problem for Republicans, as I noted in a previous post, is the growing addition of nonwhite and Northeastern liberal voters in Northern Virginia, which has given Democrats a voter advantage. […]

I believe the House of Delegate nominations had a positive impact on turnout in favor of the Democrats.

This resulted in over 123,000 Democrats participating in their local HOD races with a much reduced 40,800 Republicans in their contests.

While these local races will not make up the difference in the participation in the state-wide races it certainly had an influence.

Also remember open primaries
Allow both parties to vote the other side…
Also like the media said hillary wiuld win
Corey Stewart was cheated by fake Virginia news media
Christopher Robinson newport university lies.leader of the pack
All claimed Ed had it by at least 30%

This blog even had the illegal vitr story of last election.
Lunatic madman Rhino conservative
Talk Show host Fredericks threw Corey under a train multiple times.
Republicans are wimps.
Rep Vaginas stayed home because
They heard Ed would win big.
Besides they along with Dems love
Their govt jobs..

[…] All Down Is it time to ban Democrats from owning… Gillespie’s Secret Weapon: Metro? Democrat primary voters outnumbered Republican voters by nearly… Bernie Sanders loses again Further proof that Virginia has the dumbest […]

Maybe a bunch of republican voters decided to be democrats this primary? Maybe they have decided to become political snowbirds, voting Northern Democrat in the summer and Southern Republican in the winter. Sort of a middle of the road response to what passes for politics in Mid Atlantic Virginia.

When you keep putting up walls, eventually people stop trying to get in.

Gillespie spent over 3 times the money that Stewart did. Gillespie purchased the poll twisting, purchased the blogs as if they were a 99 cent head of lettuce. Gillespie made it rain money. Not sure that blog support did Gillespie any good, as it appears it may have actually hurt Dessart.

Corey Stewart may have lost, but he managed a far better campaign. Ed only won because he is drunk on establishment cash. Establishment cash derived via good paying American jobs being exported to Communist China, and cheap imported illegal labor.

Interesting that Bush 43′ was in at 50 g’s, and Rove threw $25 g’s at Ed. And then there is the Koch brothers. Maybe somebody should ask why Koch commercials are blasting away on the anti-Trump channels? Koch is apparently supporting MSM anti-Trump rhetoric by buying their commercials, at the same time the Ed campaign is taking a bath in Koch campaign cash. How’s that work? And who appointed the special prosecutor? Hint. It wan’t the Democrats.

And this: “While columns on this blog ridiculed Corey Stewart for cozying up to
supporters of Confederate battle flags and monuments, the reality is
that in a low-turnout primary, he got that vote and almost won with the
nomination with it. His unabashed support for Trump, even after being
fired as his state chairman in October, helped, too.”

Is ridiculous. Anyone who doesn’t think history should be destroyed should be appalled at the attempt to destroy Confederate war memorials and statues. Gillespie should be roundly condemned for not following suit.

They live off civil war battlefields to the tune of millions in tourism
Yet want to destroy history?
tear down the trail signs then
Let them find jobs at a horse manure farm.
Equal rights? For every monument downed. Take one civil rights
Leader monument and sign down.

Since the Dems are Marxists, shouldn’t they share their donation money so that everyone ends up with the same amount ?-)

Yes was wondering if Million dollar Sanders gave his 90% away. The pastrami kid from Brooklyn like Schumer never give a nickel

That is what happens when the Republican electorate indicates they want change and the party officials try and shove “the same” down our throats. Gillespie is not conservative and is a bad candidate to boot.

Stick with that, AmyH. Good advice! Double down on the Stewart wing of the party!

Seventeen percent of the electorate is not too small. After all, there are fringe parties in the same numerical territory, and they’re still around and kicking. Like a Phoenix you can build and rise from those ashes!

Do not compete for the middle. It would only dilute the brand, like the Ritz selling rooms on the cheap. Maintain your integrity, your sense of history, wave that Confederate flag!

How much is Ed paying you?

Hahaha. That’s funny! So is AmyH! Howlingly funny, if it weren’t so very sad and true.

The turnout indicates how well the RPV’s strategy is working.

How far right do you want? You people already act unhinged.