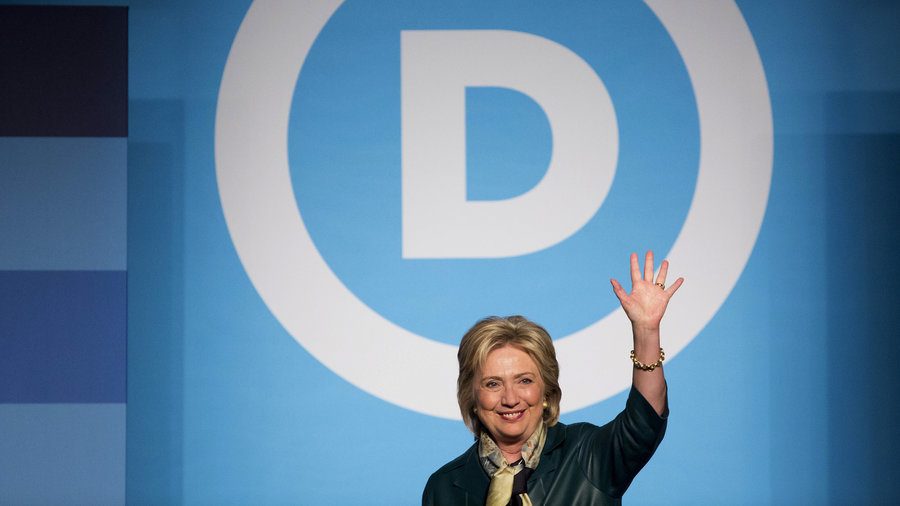 Democrats in Disarray on the Eve of their Convention

Democrats have some major problems on the eve of their convention in Philadelphia.  When WikiLeaks showed Democrat party chair  Debbie Wasserman Schultz had a thumb (more like a fist) on the scale to ensure Hillary Clinton won the nomination Wasserman Schultz announced that she will step down as Chairwoman of the DNC at the end of the convention.  It’s not clear if she will still speak at the convention but it appears unlikely. More here.  Fans of Bernie Sanders cheered in Philadelphia when Wasserman Shultz’s’ resignation was announced. Sanders had always known the democrat’s system for nominating a candidate was rigged.  Wasserman Schultz said,

Going forward, the best way for me to accomplish those goals [which include electing Clinton president] is to step down as Party Chair at the end of this convention,” Wasserman Schultz said in the statement.

As Party Chair, this week I will open and close the Convention and I will address our delegates about the stakes involved in this election not only for Democrats, but for all Americans,

This evening on “60 Minutes” online Hillary was asked if she thought it would be improper for the Democrat party to help one candidate (Hillary) to win the nomination over another candidate (Sanders).  Hillary’s response, “I don’t know”. What???  She doesn’t know?? Really?

An extensive list of all the Wikileaks emails between various staffers at the DNC can be found here.  Some of these are disgusting such as talking about killing horses for insurance money and making fun of a Black woman’s name.  They also discuss a 200K for a dinner for Hillary. Among the worst were attempts to use Bernie Sanders’ religion against him in the south. Check the whole list, there are so many disgusting emails, it’s no wonder Debbie Wasserman Schultz must resign.

Wikileaks claim there is much more to come, including leaks from Hillary’s private server when she was Secretary of State.  This week could be wild ride for the Democrat National Convention!

Democrats in Disarray on the Eve of their Convention was last modified: July 25th, 2016 by Jeanine Martin

So much for disarray and your implied predictions of implosion. The dems are kicking butt. Their messages are more hopeful and direct. Their attack on Trump is specific and sustainable. Their speakers are redirecting the conversation. The whole show is working so much better than the Cleveland debacle.

Sorry J and your TBE friends, Trump is going down in flames this November

couldn’t happen to a nicer group of crooks

Isn’t Donna Brazile the chief officer of the Clinton Foundation? I thought I saw her name on the paperwork.

There is a disgusting story in Politico this morning about how the Clintons really wanted Wasserman to resign… What complete and utter bull excrement.. The Clintons wanted the woman who was helping to orchestrate that vile Hillary’s nomination to resign… Right.

Trump has an uphill battle against the press which over and over basically calls the DNC, Obama or the Clintons to devise a press coordinated effort. If I am forced to watch CNN due to it being on in a public place, it is nauseating.. segment after segment attacking Trump. And they’ll bury the Clinton’s corruption as fast as possible.

I wonder just how long DWS will survive. She is done politically, but the Clintons have this habit of ——-//

Not a big deal or big difference from the RNC. Only with Trump, the bias was quite open. Is anyone surprised that the Democratic leadership worked against Sanders? No one liked him jus as no one likes Trump

Do you mean the GOP’s bias against Trump was open? Who likes Hillary by the way? Might want to watch the polls lately… even CNN can’t hide the public’s distrust of this corrupt POS.

It depends on what I he definition of trust is. Nothing like using a bit of Bill Clinton.

But who do you not-trust the most?

The Democrat leadership likes Hillary, and maybe her husband. Or maybe not.

That is one strange relationship isn’t it? I guess she was dependent upon him for her lousy political career but they hang around together…

Thank you, much appreciated.

Now Jeanine, let’s get on the big team and come in for the win in November!

Say it with me… Let’s make America Great Again!!!

This is good work…