New Book: Emily Gets Her Gun… But Obama Wants To Take Yours 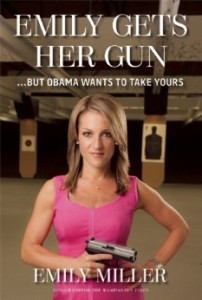 Emily Miller, a bold reporter for the Washington Times and home invasion victim wrote a remarkable book, Emily Gets Her Gun… But Obama Wants To Take Yours.  Emily is a personal friend and hero in the pro-gun movement.  I highly suggest you invest a bit of your time to order and read this book.  http://tinyurl.com/mwqghk3

In the wake of tragic shootings in Newtown and Aurora, the anti-gun lobby has launched a campaign of lies, distortion, misrepresentation, and emotional manipulation that is breathtaking in its vitriol and its denial of basic facts. Their goal is to take away our Second Amendment rights and then disarm law-abiding Americans.

Emily Miller tells her personal story of how being a single, female victim of a home invasion drove her to try to obtain a legally registered gun in Washington, D.C. The narrative–sometimes shocking, other times hilarious in its absurdity–gives the reader a real life understanding of how gun-control laws only make it more difficult for honest, law-abiding people to get guns, while violent crime continues to rise.

Using facts and newly uncovered research, Miller exposes the schemes politicians on Capitol Hill, in the White House, and around the country are using to deny people their Second Amendment rights. She exposes the myths that gun grabbers and liberal media use to get new laws passed that infringe on our right to keep and bear arms.

The gun rights debate isn’t just about firearms. It’s about protecting a fundamental right that is enshrined in the U.S. Constitution. It’s about politicians who lie, manipulate, and outright break existing laws to get what they want. It’s about President Obama wanting a bigger federal government to control you. Not just your guns–“you.” The fight for gun rights is the fight for freedom. Emily Miller says stand up and fight back now because your Second Amendment will only be the first to go.

New Book: Emily Gets Her Gun… But Obama Wants To Take Yours was last modified: August 10th, 2013 by Brian Reynolds
2 comments