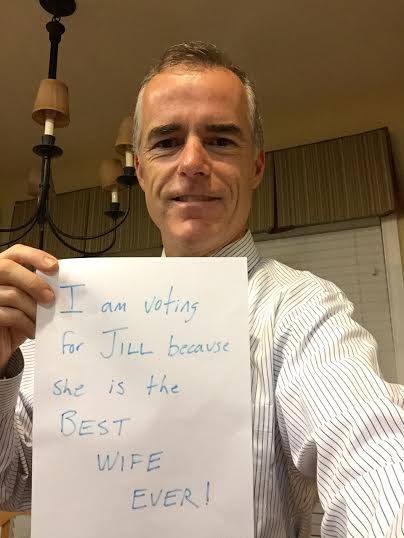 Hillary Clinton’s defense against charges that she has lawlessly handled classified information in her emails, and by using her private email server, has been that the FBI performed a complete investigation and found no violation of law. This morning, thanks to investigative reporting by the Wall Street Journal and Fox News, we may understand why the FBI dropped the case. Governor Terry McAuliffe of Virginia, a Clinton confidant, directed almost $800,000 into the political coffers of the wife of this high-ranking FBI official overseeing the email investigation.

I call on FBI Deputy Director Andrew McCabe, who, it is reported, was responsible for â€œoverseeing the Clinton email investigation,â€ to resign immediately based on disclosures from a front-page Wall Street Journal article today.

Last year, I ran for re-election to the Virginia State Senate against Jill McCabe. I was astonished at how much money she was able to raise — $1.8 million. How convenient for your husband to be a high-ranking FBI official with lots of potential influence.

Andrew McCabeâ€™s wife, Jill, received $467,500 of her campaign budget from Governor Terry McAuliffe’s political action committee. And the Virginia Democratic Party, which is under his strong influence, gave another $207,788 to Jill McCabe’s campaign.

Few people in the country are closer to Hillary than our illustrious Governor, who has served her interests for decades. He even served as Chair of Hillaryâ€™s 2008 national presidential campaign and was a potential VP running mate. When Hillary needs rescuing, Terry McAuliffe has always been there to do whatever needs to be done.

The last eight years of Democrat rule led to politicization and distrust of the nation’s leading law enforcement agency — the Federal Bureau of Investigation.

As an attorney, and a former JAG officer who has had responsibilities over the investigation and prosecution of crimes, I am at a loss to see how the FBI could possibly allow Andrew McCabe to oversee the investigation of Mrs. Clintonâ€™s email server scandals. Mr. McCabe was clearly indebted to the Clinton Campaign because of the support given his wife.

McCabe should have immediately recused himself from the investigation. His failure to do so proves that he is unqualified to serve as Deputy Director of the FBI, or in any position of trust in the United States Government.

UPDATE from The Bull Elephant, more links to this growing story:

[…] Governor McAuliffe and Virginia Democrats give Jill McCabe $800,000+. Â McAuliffe and the Clintons are BFF’s. McCabe is involved in the investigation of Hillary Clinton’s emails, and is now appointed FBI Acting Director. Â We previously connected some of those dots here.Â Â Senator Black called on Andrew McCabe to resign.Â  […]

This is the “unrelated investigation” that just busted the Hillary email scandal open again.

Reply
McAuliffe Blames Accusations on the “Silly Season” as RPV files FOIA – The Bull Elephant October 25, 2016 at 1:22 am

Spend all this money for Donald Ducks… And still no one will go to her rallies.

Dick Black – if you are posting your concerns here at TBE, you have lost all credibility. Why not work actual communication channels and contact the Director directly. By posting here, we know that you are simply playing games and not serious about change. This is a terrible way to run the gov’t – posting on a Alt-right site. Do you even know how laws are made?

They can’t handle the truth so they attack the messenger. Yawn. It’s a tiresome old game with Dems.

Where did I defend anything? I realize that you seldom read anything other than your own words. I am absolutely on topic which a call to Black to do something other than post here. If he believes something should be done, then did it!

Are you new to this blog? Senator Black is a frequent guest poster here.

His message this time is. It simply an opinion piece. It is a call to the FBI to change leadership. If he was seriously interested in change, why not make it happen. Typical legislator, he would rather post about something than make it happen. Enough with simple rhetoric. Time for action.

But silly me for wanting to see change in the govt unlike Jeanine and the others here who would rather keep things the same so that can whine and moan.

Why attack me for wanting action? Unless you realize that there is nothing wrong here?

BTW, still not a democrat. There are more than two choice

Do you mean people like the NYPost, Fox News, LA Times, WMAL, etc. should report on it? Because they did. If you dislike this web site so much, stop trolling it. Get your news from another source. Oh, wait, you probably troll here because you know they have breaking news.

I troll here because you and your kind amuse me

I urge everyone to read the WSJ article, http://www.wsj.com/articles/clinton-ally-aids-campaign-of-fbi-officials-wife-1477266114?tesla=y From the article, At the end of July 2015, Mr. McCabe was promoted to FBI headquarters and assumed the No. 3 position at the agency. In February 2016, he became FBI Director James Comeyâ€™s second-in-command.

As deputy director, Mr. McCabe was part of the executive leadership team overseeing the Clinton email investigation, though FBI officials say any final decisions on that probe were made by Mr. Comey, who served as a high-ranking Justice Department official in the administration of George W. Bush.

Let’s not forget that Governor McAuliffe is also under investigation by the FBI and it is not clear if Andrew McCabe has recused himself from that investigation.

“Let’s not forget that Governor McAuliffe is also under investigation by the FBI and it is not clear if Andrew McCabe has recused himself from that investigation.”

Terry McAuliffe NEEDS TO RESIGN or be impeached and removed.

McDonnell gets put through the wringer and McAuliffe is walking a round. McAuliffe needs to get ARRESTED!