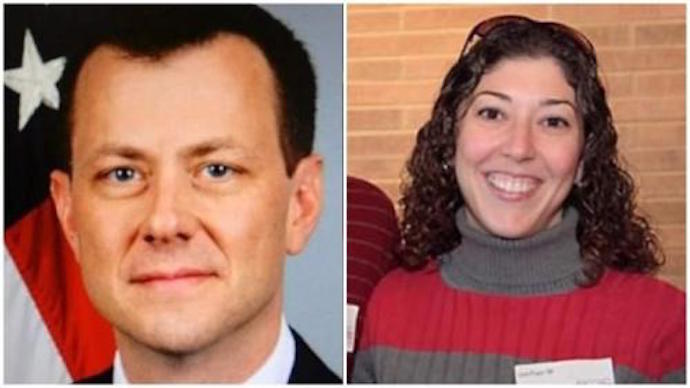 Among the many interesting nuggets found in the text messages exchanged between FBI employees Peter Strzok and his mistress, Lisa Page, is a newly released exchange in which the pair lament the outcome of the November 3, 2015 Virginia Senate election in which Dr. Jill McCabe, wife of soon-to-be FBI Deputy Director Andrew McCabe, lost by 5 points to Sen. Dick Black (R-Loudoun).

Readers will also surely recall that Team Clinton invested heavily in that race, pouring close to $700,000 in donations to support McCabe’s first foray into politics.

Further, as much recent reporting has indicated, Strzok, the FBI investigator who led the probe into Hillary Clinton’s unlawful email practices involving classified government emails, had significant biases against Donald Trump and in favor of Ms. Clinton.

Thanks to newly released texts, however, we now know his biases are not just about policies or personalities, but instead reflect a deep animus toward those who may disagree with him. In other words, he’s a typical east coast elitist progressive.

Here’s what Page and Strzok had to say in the wake of Sen. Black’s defeat of their boss’s wife:

For those reading from devices on which the above image does not display properly, here’s the transcript:

Page: [Jill] lost. What a f-ing disappointment.
Page: 52/47. I’m really so disappointed. What is wrong with people?
Strzok: [redacted]nb) I saw. Disappointing, but look at the district map. Loudon [sic] is being gentrified, but it’s still largely ignorant hillbillys [sic]. Good for her for running, but curious if she’s energized or never again.

So, Loudoun Republican voters, how do you like the disdain aimed in your direction from senior personnel at the agency charged with investigating the candidate of your party?

The full documentary release is embedded below.

“I am outraged that officials in one of the United States’s top law enforcement institutions would demean and degrade citizens from Loudoun County. This type of language shows exactly why the American people are worried about the politicization of the FBI. Every single Democratic candidate in Virginia’s 10th Congressional District needs to denounce this slur. If they do not, they implicitly agree with Mr. Strzok’s liberal elitist language.”

they are both extremely unattractive people….who said opposites attract? my goodness they are as ugly as they are ignorant, and as power-hungry as they are libs…libs are always starry -eyed at power and fame and the riches of this world; they think their job positions are who they are

you cannot serve both God and mammom

Are you trying to be ironic? You are hitting on all cylinders, if so.

Smart enough not to fall in-line with the dictates of the Commie Democratic machine.

Reply
Peter Strzok and Lisa Page and their spouses–photos – The Bull Elephant February 8, 2018 at 12:29 am

[…] Posts Peter Strzok and Lisa Page and their spouses–photos FBI Texts: Loudoun voters are “ignorant hillbillys” –… George Washington Holiday Summary of the Front Royal Debate for the… Another Loudoun […]

If not hillbillies then lemmings.

To be fair, they are really just talking about Western Loudoun…

You are really having trouble. I suggest a glass of wine and a session of “Friends or Cheers”. Go to bed early and stay there for at least 24 hours. Then check your pulse to make sure you are alive. Maybe, and i repeat maybe, you will come back to half troll status, but at this point you aren’t even a troll, just a confused puppy.

Let’s see here. Strzok is the #2 man in the FBI Counter-intelligence division. Lisa Page is a trial lawyer on Robert Muller’s investigation team. They are having an extramarital affair (Strzok, as I understand it, is married). Their employer, the US Department of Justice, issues them cell phones. They proceed to exchange 50,000 text messages over a two year period including some very inflammatory comments.

Neither of these investigative and legal geniuses ever considered that the tens of thousands of text messages they were sending back and forth over government issued phones using a government funded wireless contract might be stored and examined later?

Yeah, it’s the residents of Loudoun County who are the ignorant hillbillies!

Strzok and Page are obviously dumber than stumps. Dear God, what kind of an incompetent clown show is that fool Mueller running?

They never thought any of this would be discovered until late in the game when the tried to figure out some type of insurance against a Trump election. If Hillary had been elected, none of their ideas and behavior would have seen the light of day. They counted on her election to hide – and now they are fully exposed. I suspect they are numero uno on the indictment list but there are so many choices. The coup is being exposed thankfully.

I notice the troll brigade is missing in action. Probably trying to figure out how to distort the obvious.

Yep. The corruption and illegalities were supposed to get covered up by the Racketeer Influenced and Clinton Organizations. But she lost.

Looking forward to Obama doing some jail time too.

I doubt Obama will get jail time, but he might very well find himself personally named as a defendant in civil law suits. After all, thanks to his activity in support of these FBI assassins, he managed to get indictments and plea bargains against Flynn and Manaport. Even Trump has a grievance here but I doubt he will chose to act on it. This one statement, “POTUS wants to know everything we are doing.” is critical because doing is action, and that action only has one target.

Obama was as corrupt as the Clintons, and maybe even more so. I hope he suffers some consequences for using government resources for political gain.

If nothing else, billionaire Trump can sue millionaire Obama into oblivion.

But jail time would be much sweeter.

Thank God for one patriot in congress – Nunes. Yes, there are others but he gets the credit for this unAmerican horror and tyranny being exposed. My hope is that this is like the dam breaking and the flood pours out like a mighty river.

I have to admit real difficulty in controlling my anger here. This nation was blessed to be established by brilliant men acting under God’s protection who trusted their fellow men and women. Obama, Clinton, and their socialist cronies deserve nothing but condemnation by every citizen. If mercy is to be had, let God bestow it on them. I cannot.

The real anger IMHO isn’t that we have some corruption (there is one in every bunch), it is that there is an entire political party and their media cronies that embrace corruption. Indeed, they make political appointments to DOJ positions (and other positions in the legal community) to ensure friends get away with murder.

This is much worse than Watergate, and yet the Democrats are trying to pretend there is nothing going on instead of digging deep and rooting out the corruption in their own party.

This is the problem when the ends justify the means.

The First Black President will never go to jail. That would be racist.

Who said anything about Bill Clinton going to jail? /sarc

How about orange ones? Is that racist?

Isn’t orange part of the LGBT flag? No, orange can’t go to jail. Only black or white.

What about the first half-white President?

No he is half African and half American therefore all he is Halfrican-American.

That would be justice.

On a scale of 1 to 10, with 1 being a very weak troll and 10 being a truly clever troll, you score a 0.25. I have faith you will be back shortly but you have obviously been stunned by the truth.

Amusing you for 10 years and running….

I think Clinton was headed to victory in early September, but she helped the Trump campaign greatly with her basket of deplorables comment. Conservatives embraced it with shirts saying Proud Deplorable. I think comments like this by corrupt federal bureaucrats could have a similar effect of energizing the conservative base.

I am a proud ignorant hillbilly, as I too would have voted for Dick Black over Jill McCabe, if I wasn’t stuck in Jennifer Wexton’s district.

There is also another e-mail gem that makes Obama complicit in the Weaponizing of the FBI/DOJ against President Trump. The only question is how to proceed against a president who is no longer in office. If criminal acts in the misuse of the presidental office are involved, then felonies are likely to have have been committed. Should Obama be indicted? Or, civil liability might be involved as is the case with Lois Lerner who personally abused her office and is now being sued. This is new territory for American justice.

“POTUS wants to know everything we are doing.” From LIsa Page

There are two ways to interpret this statement, for now. Andy McCarty at National Review explains why it is not yet the gem of evidence it’s being taken to be. In my ‘hillbilly’ paraphrasing, it depends if Obama wanted to “know everything” about an intelligence investigation (Russian influence on election) or a criminal investigation (Clinton emails). The first is part of his job description, the second could have been illegal.

I point this out simply to say we have a ways to go yet. All of the records need to be put on the table yesterday.Were it up to me, anyone that dirtied their hands in this would be serving life at Gitmo yesterday.

Out of context and out of the flow of their dialogue, you could be correct. However, you have to put this Page statement into the overall dialogue which isn’t about Russian influence but about getting Trump and protecting themselves (insurance policy) in case Trump were to win.

No argument with you. I want to see everything on the table. Clearly there is a lot of incentive not to let everything reach the table.

“Readers will also surely recall that Team Clinton invested heavily in that race, pouring close to $700,000 in donations to support McCabe’s first foray into politics.”

Now, keep in mind that the Hillbillies in Richmond refuse to do away with the corrupt practice in Virginia that allows campaign funds to be spent on oneself. So, if you really want to legally bribe people in Virginia, you give a big donation that the candidate/elected official who gets to spend it on oneself.

So, you want to get money to a critical member in the deep state, have their spouse run for office, pour a bunch of money into the election, and make them fat and happy.

Although, I’m guessing these folks are now very unhappy.