Sen. Mike Lee ABSOLUTELY NAILS IT.  The Obama administration’s petty tyrannies during the first week of the government shutdown neatly illustrate the problem with giving politicians too much power–they’ll use it. 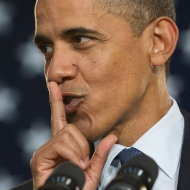 Shhh…I’m trying to convince the American people that less government is scary!

There is really no excuse for the president’s petty, spiteful actions this past week. At every turn, the president has gone out of his way to make the government shutdown as painful and disruptive as possible. The administration has left Michelle Obama’s “Let’s Move” website active while affirmatively making many others inaccessible.  [Note that these other sites are still up, they’ve just redirected to shutdown pages.  That means that there is no reduction in expense, as the site is still being paid for, only that it has been purposefully made unusable.]

The president has allowed the otherwise-closed National Mall to be used by his close union allies in SEIU for a political rally in favor of illegal immigration, while stiff-arming everyone else, including WWII veterans and other Honor Flight participants.  And lest you think you might not be getting the straight story on that, Nancy Pelosi herself went out of her way to thank the president for making the Mall available for the lefty rally.

The president has also blatantly caused private residences and private businesses to be needlessly shut down, as my colleague Jeanine Martin has noted.  Furloughed federal workers have been ordered not to work, even voluntarily, resulting in innumerable manufactured hardships, such as a forced shutdown of religious services on military bases.

Folks, the words arbitrary and capricious mean nothing if they don’t describe what the president and his people have been doing with federal power over the last week.  But I can’t explain that nearly as well as Senator Mike Lee (R-UT) did:

“The Obama Administration’s behavior during the first week of the shutdown has been the best argument against Obamacare anyone has ever made,” said Senator Lee.

“The American people do not want Obamacare, and they are demanding that Washington act to protect them from the harmful effects of this unfortunate law. The president’s response has been to ignore them, allow the government to shutdown, and then use his power to close national parks and monuments, stop paying veterans’ benefits, and cut off cancer research.

“This is exactly why we should not expand the government’s power over our health care choices. What power the government has, it will use – and misuse – to advance its own interests, even if that means punishing the American people along the way.

“The message behind the Administration’s shutdown bullying is the same message sent by his IRS’s abuses of political opponents: do what I say, or else. This is the abusive, partisan, unaccountable bureaucracy that, under Obamacare, will soon be running America’s health care system.

“The scenes of World War II veterans being shut out of a monument built in their honor should be a bright red flag warning the American people what an out-of-control federal government is capable of. Each day brings a new and more vivid example of why it is critical that we not allow Washington to reach even further into our most personal and intimate decisions.

“We now see how determined the president is to expand the power of the federal government and his willingness to use that power to harm the country to get what he wants. Congress cannot allow this to stand and should continue to work to end the shutdown and protect the American people from Obamacare.”