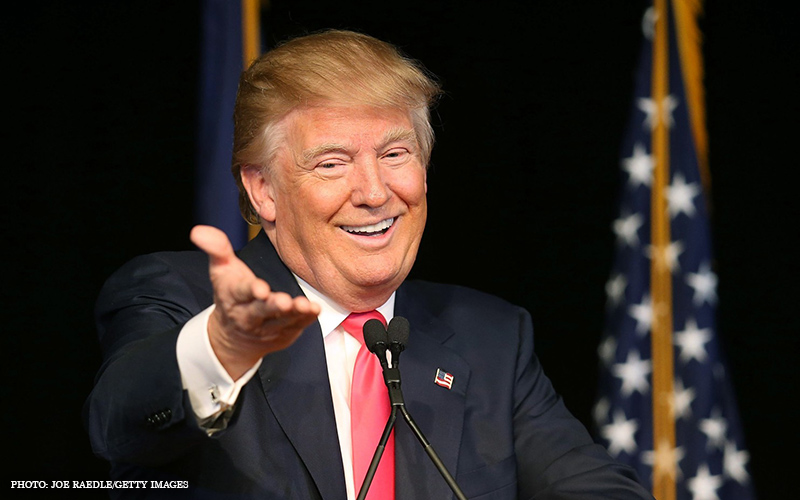 Give Trump a Chance

Donald Trump has exceeded everyone’s expectations, but those of the true-believers who were with him from the beginning. I remember attending the release party for How To Bag A Rino, by Zach Werrell and Gray Delany in 2015, and Ron Hedlund was there with Trump signature sheets. There were chair and co-chairs, representatives of other candidates in that room, but only Mr. Hedlund bothered to show up with signature sheets for his candidate. His certainty and sincerity that evening was enough to convince me that Trump wasn’t to be trifled with. However, on my way home, I thought to myself how silly it was for Hedlund, as well as other notable anti-establishment types like Virginia Right‘s Tom White, to support a candidate so horribly flawed and with such an impossible road to the nomination.

During the primary, aristocrat, son and brother of two American Presidents, Jeb Bush had a prophetic message for Donald Trump.

Oops. Trump saw something Jeb Bush didn’t. Apparently he could insult his way to the presidency. Then came all the lies and nasty politics from the Trump campaign directed toward Ben Carson, Rand Paul, and Ted Cruz. One by one Trump humiliated, mocked, insulted and derided every candidate that pretended a threat toward his ascendancy.

In the meantime, Trump made a lot of enemies amongst conservatives. However, Americans like winners. The nastier Trump became and the more he humiliated his competition, the more Republicans ditched their fallen heroes to board the Trump Train to…. well, only God knows where that train is taking us.

There were a lot of hurt feelings, a great deal of disgust and anger; but now that Trump is the President-elect we ought to give him a chance. Every single Republican candidate had a strategy for winning the nomination. Cruz was going to blow away the nation with his brain. Jeb was going to purchase it with over a hundred million dollars. Carly Fiorina was going to prove that no one could attack Hillary Clinton with the same clarity and sharpened claws as she possessed. Governor Christie was going to prove once and for all that, yes, somebody can, in fact, eat fifty eggs.

Trump was going to insult his way to the presidency. Hey, can’t blame Trump for picking a winning a strategy.

Now, we all knew Trump was going to break a lot of his promises; primarily because many of his promises contradicted themselves, so actual contradictions were inevitable in the future. We can all have a little bit of fun with Trump during his first four years as he proves just what a shtick he had rolled out during the primary. That said, Trump saved the Senate for the Republican Party. Do you think Richard Burr (R NC) would still be in the United States Senate without Donald Trump on the ballot in North Carolina? No way. He’s a horrible Senator who had no business getting reelected, but he rode Trump’s coattails to another six years. Don’t get me wrong, Burr (as horrendous as he is) is better than a North Carolina Democrat.

Let’s be honest about where our aggravation and anger really come from – those of us who didn’t support Donald Trump – because it’s not really with Trump. Who isn’t happy that Hillary Clinton isn’t President right now? Who isn’t happy that the Republican Party controls more levers of power within American governments than at any other time in American history? Who isn’t happy – who isn’t anxious – to watch Speaker Ryan, Leader McConnell, and President Trump erase the Obama-Pelosi-Reid legacy in this country? What really bothers us, the real source of our anger, is Donald Trump’s supporters.

Now, I have a great deal of personal respect for many of these people, but I have almost zero political respect for them. I see them backing a candidate in 2017 and I’m asking myself what I missed, how are these candidates worse than I imagined? For the social-media addicted Republicans in Virginia, these Trump supporters are increasingly incorrigible (and who can blame them?!?).  However, the desire to smash them is practically overwhelming. Am I right?

We need to make sure that our desire to see them with mouths full of crow and years upon years of future political defeat should not make us begin hoping that Donald Trump fails. He’s going to be the next Republican President of the United States of America. As Donald Trump goes, so goes the party. I have been forced to place my faith, my hope and my support behind three Republicans I absolutely cannot stand in Paul Ryan, Mitch McConnell, and Donald Trump. However, these men will define the future of the Republican Party. We could win elections for a generation if they do a good job; so… I hope and pray that they do a good job. We need to support these men, pray for these men, and encourage these men to do the best job they can do.

I have no doubt that there is going to be a great deal of viciousness and animosity between Trump supporters and real Republicans in Virginia (see what I did there?) going forward. These struggles ought not, however, make a single one of us take any delight in failures associated with our party’s leaders. We need to have a greater vision for our country and our state politics than merely entertaining our own hard feelings. I want Donald Trump to succeed. I want Donald Trump, after 8 years, to make us forget Ronald Reagan. I want Speaker Ryan to make us forget Speaker Gingrich. I want Majority Leader Mitch McConnell… well, I just hope he doesn’t eat any babies on YouTube. I mean, that’d be nice. We’re Republicans. We value life.

So, let us have our petty little civil war in Virginia on the battlefields of twitter and facebook and the blogosphere. Let us all, however, pray for our future President, Donald Trump, and support him toward a successful and conservative administration for the next eight years. Our Party depends on his success.