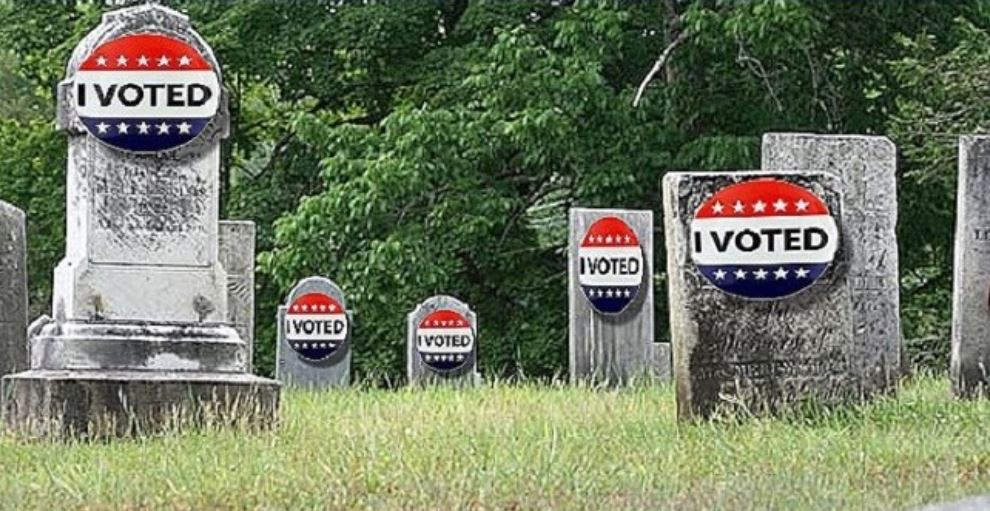 GOP must embrace “supply side” efforts to grow the base, not just complain about vote fraud

RPV deserves your help and money for voter registration drive

A search of this great blog finds a number of very good articles on voter fraud led by Democratic operatives or affiliated groups, including:

·      States must coordinate in order to stop voter registration fraud

The Washington Times reported most recently June 20 on studies, projecting that as many as 5.7 million may have voted illegally  in the Obama-McCain election in 2008, plus one Virginia study showing an actual  5500 illegally registered in Virginia of which 1,850 voted.  Plus, the 12 operatives linked to Democrats who were charged in Indiana with registering people against state laws. See: Indiana vote fraud charges

When Republicans read these articles, and see Gov. McAuliffe’s frantic efforts to sign back voting rights to felons, we are immediately incensed and feel Democrats are stealing elections, and that even Hillary Clinton’s 2.8 million popular vote margin against Trump must have been due to fraud.

We, as a party, are committed to photo ID at the polls to prevent fraud.  However, we do not seem to engage in voter registration drives the way the Democrats have done successfully to beat us in Virginia and other states.  You’d think we would try to “growth the base” since we believe in supply-side economics, no?

As we enter the 2017 statewide elections, and with Democrats having a clear voter base advantage as I noted in my June 15 article Democrat turnout in primary nearly 50% more than GOP it would be wise to revisit this issue as we only have only until mid October to boost our voter rolls.

In December 2015, shortly after being named 10th District Chairman for the Trump campaign, I showed a Trump campaign staffer some data I compiled indicating that in rural counties in Virginia, as many as 30 percent of adult voters who were not even registered to vote.

I did a crossmatch from census data (2010) indicating the number of person 18 and over with those actually registered, according to the State Board of Elections, to guesstimate the number of unregistered voters.

For example, as of December 2015, my analysis shows that Tazewell County had 32% of voters unregistered.  Lee County, 30% and Bedford County 20%.

Despite promises from the RNC to put in personnel to handle registration, Democratic voter registrations clearly outnumbered whatever efforts were made in GOP congressional districts.

This table compares the status of active registered voters as of January 2016 with end of September totals from the SBE.  Registration ended Oct. 17.

The 1st and 10th districts had large registration increases, but I believe that is because Loudoun County is entirely in the 10th District and has many new voters.  The 1st contains much of Prince William County, which also has new voters and a larger non-white population, which makes it virgin territory for Democrat voter registration efforts.

Getting voters registered and to the polls was the hallmark of Obama’s ability to take Virginia out of the Red column in 2012 and in 2008, the first time the Commonwealth was carried by a Democrat since Lyndon Johnson’s landslide in 1964.

This is how the Washington Post reported on the Virginia voter registration effort after Mitt Romney’s defeat in 2012:

Obama’s state director, Lise Clavel, said the campaign registered nearly 140,000 new voters in Virginia this cycle — mostly from demographic groups that favor Democrats, including 66,000 new black voters and 35,000 Latinos. Most of the new voters were both women and younger than 35.

The campaign then focused on turning voters out — particularly those with spottier voting histories. They weren’t just urged to vote; they were called, visited and asked to recite where and when they’d vote and how they’d get there.

Obama’s tactical generals said there was a qualitative difference in the kinds of contact the two campaigns made: Obama focused on personal appeals from friends or neighbors, whereas Romney’s contact count included mailings and robo-calls, Obama officials said.

This table shows how narrowly McCain, Romney and Trump lost in Virginia.

Indeed, a goodly number of these Obama-registered voters might not be legal citizens, but to date the only proof of that is the study reported in the Washington Times (above), and that shows only 5,500 unlawfully registered voters – not enough to influence the turnout in at least these races.

There is now an effort by the Republican Party of Virginia to register voters who are likely to vote Republican.  The Washington Post reported on this May 4, saying RPV was looking to “raise $250,000 by June 1 and $2 million by the November election to register and turn out 100,000 voters.”  RPV voter registration efforts

Too bad this was not done more concertedly in the 2016 campaign when we had a presidential candidate – Trump – – on the ballot with great appeal to such voters.  In the coming 2017 election, we will be lucky to see a 45% statewide turnout.

In addition, it’s arduous to register rural voters versus urban areas, which is where the Democrats focus their efforts. This is why paid staff are needed.  So, I donated to RPV for their registration drive and hope you will, too  www.RPV.org

The Gillespie-Vogel-Adams ticket has its work cut out given the Democrats’ voter advantage.  But with a good bread-and-butter message, keeping the conservative base that voted for Corey Stewart and Bryce Reeves, AND registering new rural voters and getting them to the polls, they can win this November and ensure great GOP leadership in Richmond the next four years.

GOP must embrace “supply side” efforts to grow the base, not just complain about vote fraud was last modified: June 21st, 2017 by Guest Contributor Ken Reid

No, continue to speak of voter fraud , illegal aliens voting , he’ll even some human trafficking.
When elected you allow all of this here.
Did McDonnell win on his previous merit? If so he sure fell asleep in the guard tower – http://watchdog.org/202012/subcontractors-shadow-economy
Claims of what you “conservatives” can or WILL accomplish are grossly over exaggerated.
Back to the cloth covered tables of the Commonwealth Club.
As a Trump supporter USA Today supply he has 100 lobbyist on payroll,
He has only deported 39 illegal aliens from New York, go figure that.

What? Didn’t Donald J. Trump promise to deport them?

I just do not see any benefit to having a Republican governor with the House and Senate solidly gerrymandered Republican. Perhaps you would tell me what’s in it for me if Ed is elected governor? On the other hand, if Ralph wins, we will not see another McDonnell like tax increase.

Never heard of county fairs or stock shows, I guess. For two million bucks you could fly Dale Jr. around the state and really load up. Regardless, it won’t be enough to over come Blue Nova. The people you want to register already have plans to find real jobs up north.