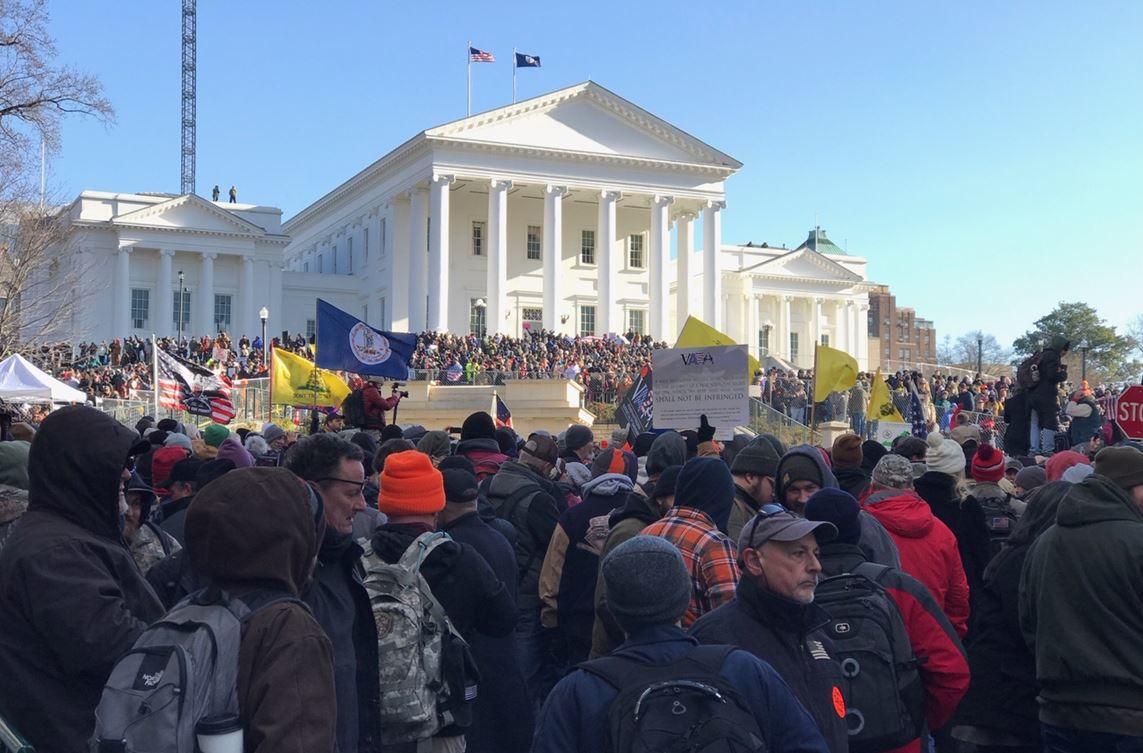 On Monday, I attended Lobby Day for the first time. I was initially excited about going, but in the week leading up to January 20th, I received numerous warnings from friends, which caused me to question my decision to go. However, somewhere I read, “if our forefathers had been afraid, we would still be eating crumpets and drinking tea.” My father was a World War II veteran, and my mother was a refugee from East Germany who survived the bombing of Dresden.  As the daughter of brave parents, I wanted to do my small part and stand up for the Second Amendment. I think my Dad would have been proud of me.

Since Monday, I have read some incredibly inaccurate accounts of the day.  Governor Ralph Northam patted himself on the back for “de-escalating” a dangerous situation; AOC complained that there was no police presence in riot gear (maybe because there were no agitators hurling rocks, attacking innocent people, and destroying vehicles); the news media maintained that there were mostly “armed white men” present; people were accused of wearing masks to hide their faces; and just yesterday, someone said the Rally “terrorized the Richmond community.”  Each one of these claims is patently false.

From my perch on the wall of a building directly across the street from the Capitol, I had a great view.  My friend and I decided ahead of time we were not going inside the fenced-in area that Ralph Northam deemed necessary, as part of his State of Emergency. It was freezing cold on Monday with icy winds, which is why some people were wearing “masks.”  I had a scarf wrapped around my neck and up to my nose and was grateful to be able to hide my face from the cold.  Contrary to numerous reports, there were lots of women and many African Americans at the Rally – not just white men.

I have never attended an event where so many people were open carrying weapons.  When I first saw all of the guns, it was a bit startling, but I can honestly say that I’ve never felt safer than I did on Monday.  When we arrived, there was a huge police presence in every direction, with officers lined up along the streets, in front of the Capitol, and snipers in clear sight on rooftops.  As the morning progressed, the crowds grew larger, but the police became more relaxed. Why?  Because they knew we posed no danger.

There were numerous chants from the crowd, but the most popular was definitely USA.  People waved flags and we sang the National Anthem – a bit off key, but with great enthusiasm.  During the day, I saw 1 Confederate flag, 2 Trump flags, and a handful of Trump hats. The Rally was about defending the Second Amendment – not about the President.

I stood between a Pastor from Texas, who moved to Virginia a year ago, and a young man from Louisa County.  Both expressed their condolences that I live “up North” and suggested Northern Virginia should be annexed by Maryland, leaving the rest of the state Red. After a couple of hours, my feet were almost numb from the cold.  A man standing below me heard me say that I hoped someone would catch me if I lost feeling in my feet, and he kindly handed me a pack of toe warmers. What a blessing!  Everyone was nice, and there was a real sense of camaraderie in being with strangers who, for those few hours, felt like brothers and sisters.

I came away from Lobby Day feeling grateful to have been there; relieved that infiltrators intent on causing trouble stayed away; and saddened to realize that many on the Left and in the media were actually disappointed by the absence of violence.

On Lobby Day 2020, the sun was shining; the Rally was peaceful; people were happy; and 22,000 patriots were joined together by their abiding faith in God, belief in the Constitution, and love of America. What could be better than that?

Rosie Oakley has been a resident of Fairfax County for 30 years and is currently a District Chair for the Fairfax County Republican Party. She worked for the Associated Press, operated her own executive recruiting company, served as the director of a national special needs conference, and currently works for a sports event management company.