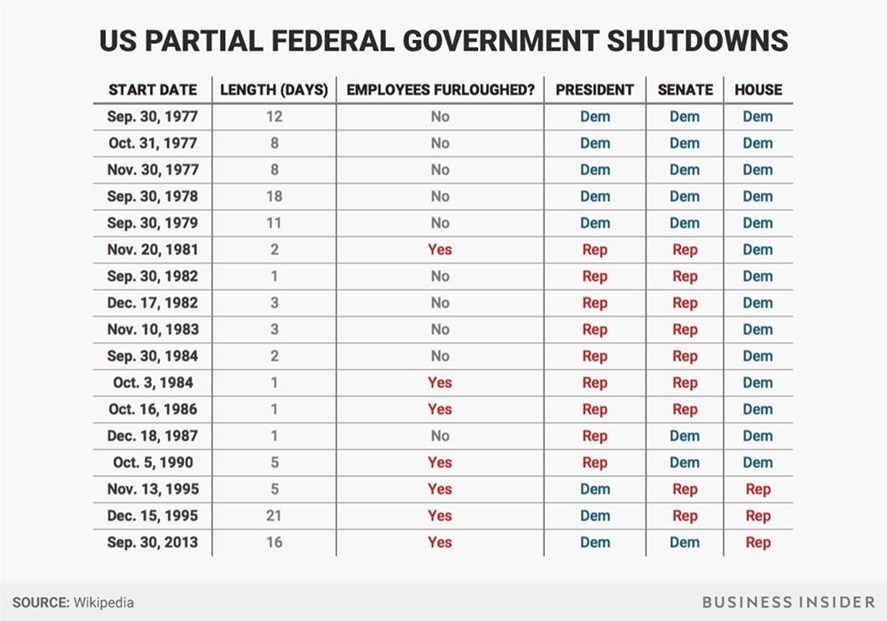 Longest U.S. government shutdowns occurred while Democrats were in the White House

The Dec. 21 partial closure of the federal government due to Congress and the Trump administration being unable to pass an FY ’19 budget nor continuing resolution is not just about border security (the Wall), but finger pointing, blaming and political one-upmanship.

We will see who blinks first during the current shutdown, which is actually a “partial shutdown” as Jeanine Martin noted on this blog, meaning, much of the government (i.e., Department of Defense), will be open and burning our tax dollars.

Government shutdowns due to budget impasses between the White House and Congress date back to 1976 when Congress adopted the current budget and appropriations process, including moving the federal fiscal year end from June 30 to Sept. 30 (which occurred in 1974).

According to Wikipedia, there have been 20 gaps in budget funding, eight of which led to federal employees being furloughed. Prior to 1990, funding gaps did not always lead to government shutdowns, but since 1990 the practice has been to shut down the government for all funding gaps.

However, the longest government closures did not occur during periods of divided government, i.e. Democrat presidents and GOP Congress, but when Democrats controlled BOTH the White House and Congress – -during the Carter administration!

And, three of them occurred because Democrats were divided over Medicaid funding for abortions (which became the Hyde amendment in 1978).  Bill Clinton’s administration, when the GOP controlled both houses, had the 2nd longest shutdowns.  Imagine – Democrats standing up for life!

Here is the list of federal government closures according to the Library of Congress:

None under George W. Bush.

No government employees were furloughed during the Carter shutdowns except the one involving the FTC in 1980.  According to this article, here are the details of each closure:

9/30/77-10/13/77 (12 days) – The House wanted to continue a ban on abortion using Medicaid funding except in cases where the life of the mother was at risk. The Senate wanted to open this up to allow for abortions in the cases of rape or incest or when the life of the mother was in danger. The funding was tied to departments of Labor and HEW (which became HHS under Carter), which led to the shutdown. The ban was eventually continued until the end of October, allowing negotiators time to work out a deal, ending the shutdown.

10/31/77-11/9/77 (8 days) – The prior standoff was not resolved, which led to another shutdown. Another temporary bill was signed by Carter giving more time for Congress to resolve its standoff.

11/30/77-12/9/77 (8 days) – The second temporary measure was not long enough — the House said a Senate proposal allowing Medicaid to pay for abortions by victims of statutory rape was a non-starter. A new deal was eventually brokered allowing an exception for cases dealing with abortions resulting from rape or incest or which are necessary to protect the mother’s health.

9/30/79-10/12/79 (11 days) – The House wanted to raise congressional pay by 5.5 percent – the Senate opposed the move. The House also wanted to limit federal abortion spending to cases where the mother’s life was in danger. This led to a partial shutdown. The shutdown was ended when the House got their pay increases, but had to allow abortion funding in cases of rape or incest.

5/1/80 — The Federal Trade Commission (FTC) was shut down for one day after Congress failed to pass an appropriations bill for the agency.   Federal Marshals were deployed to some FTC facilities to enforce the shutdown. About 1,600 workers were furloughed, and the shutdown cost $700,000.

Comment:  Shutdowns of late are due to political grandstanding.  The Obama closure was really a “Ted Cruz” shutdown. In October 2013, Cruz filibustered the budget in a failed attempt to overturn Obamacare.  This catapulted Cruz as a national conservative hero and he raised tons of campaign donations from his stunt.

While I support the border wall, I am concerned how long Trump can withhold signing a continuing resolution, especially with Democrats taking control of the House in about 10 days.  He has little chance of getting wall funding over the next two years. However, since much of the federal government is open during this current shutdown, it remains to be seen whether Trump will blink first.

I hope he doesn’t.