Mike Thomas Snuffing Out Conservative Votes with the Help of Democrats 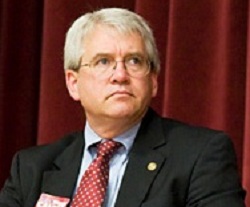 The Young Guns Godfather puts out the hit and the deed is carried out. It has already happened in Virginia Beach, Richmond City, Charlotte, and now Campbell County.

Last night Mike Thomas, who is the First Vice Chairman for the Republican Party of Virginia, was involved in coordinating the takeover of the Campbell County Republican Committee with the enlisted help of an estimated 100-150 Democrats and Campbell County employees. The facts will disturb you greatly.

Neil Vener and John Ferguson are the individuals who took over the Campbell County GOP last night with the help of Mike Thomas. Mr. Vener and Mr. Ferguson have been active members of an organization the last few years called, “Independent Conservatives of Campbell County.” They have a great title, but they have actively and publicly opposed Republican nominees and run independent candidates against Republican nominees.

They accomplished this unprecedented turnout because Neil Vener, former Commonwealth Attorney for Campbell County, submitted a FOIA request to obtain the emails of all county employees in Campbell County. He then sent out an email to all county employees (The Bull Elephant has exclusively obtained this email) to tell them they needed to come to the Republican Meeting to prevent the REPUBLICANS on the Campbell County Board of Supervisor from “blindly cut[ting] taxes and ruthlessly slash[ing] the budget.” In fact, during the Mass Meeting last night Independent Supervisor Stan Goldsmith stood in the meeting defending the largest tax increase in Campbell County history and he received loud and extended applause. Hardly a Republican crowd!

They assured these county employees and Democrats that they did not have to be a Republican and that the Republican pledge that they would be required to sign was “nonbinding,” so they should not hesitate to sign it.

The results tell the story:

In all this they kept a few token conservatives as a defense to their actions.

So let’s recap the indictment. We have Mike Thomas, First Vice Chairman of the Republican Party of Virginia, helping two individuals take over the Campbell County unit of the Republican Party of Virginia who: 1) belong to an organization that has publicly opposed Republican nominees and run independent candidates; 2) actively recruited people to the Mass Meeting with the motive to come oppose Republicans who want to cut taxes and the budget; 3) who coordinated caravans of county employees and Democrats to the meeting to accomplish their goal.

It seems to me that questions should be raised on whether or not Mike Thomas can keep his position on SCC given his pro-active efforts to harm the Republican Party with Democrat involvement and with individuals who currently oppose elected Republican officials who want to cut taxes. I am pretty sure tax cuts are the cornerstone of the Virginia Republican Creed! It is pretty easy to see that Mike Thomas is working against our Party and the voice of the grassroots.

One final note. At one point the conservatives approached Mr. Vener with a proposal: accept all properly pre-filed delegates to the Unit, 5th District and State Convention and we will support your Chairman for Campbell County by voice-vote acclamation. The response by Mr. Vener? “F#ck You!”

Yeah, this is the message to the conservative grassroots from the guy Mike Thomas actively helped. Nice.

Next up for Cantor’s Young Guns? Henrico and Fauquier County.

After serving more than 32 years in the Campbell County Commonwealth’s Attorneys Office prior to retiring in 2011, I am writing you and other County employees out of grave concern for the state of our county’s future and the potential impact on your job.

In the last two meetings of the Board of Supervisors, it has become clear that the Board of Supervisors is just one member away from being totally controlled by political extremists whose only agenda is to blindly cut taxes and ruthlessly slash the budget with no regard for the damage they will inflict on Campbell County residents and to you as faithful employees.

You can stop this from happening if you move quickly. But you have only one real opportunity. You, your family and your friends must come to the Campbell County Republican Mass Meeting next Thursday, March 20, at 6:30 p.m. Having as many people as possible who share your views is critical because the number of people is the key to having our voices heard. Please note that you will not have to speak at the meeting.

The extremists already are playing political games with the meeting location, apparently in a move to squash your attendance. So I will have to let you know where they finally decide to hold the meeting. There is no cost to you and you do not need to be a “Registered Republican” to attend. All that is required is that you be registered to vote in Campbell County I am part of a large group of concerned citizens who are doing all we can to keep Campbell County from falling into the political control of these extremists. Please join us at this meeting and fight for the future of Campbell County and possibly the existence of your job. If you don’t feel you can attend, send family members and friends to let your voice be counted.

Please send me an email from your personal computer or cell phone at NeilV2@jetbroadband.com with your name, personal email and personal telephone number rather than any of your work contact information. I will get back to you with the final details of the meeting location, instructions on how the meeting operates and what you need to do once you get to the meeting. If you have any questions, please leave me a message or text me at 434-515-1594, and I will call you back.

Remember: This is an important meeting! You only have one chance to have a say in the outcome. Come next Thursday night!