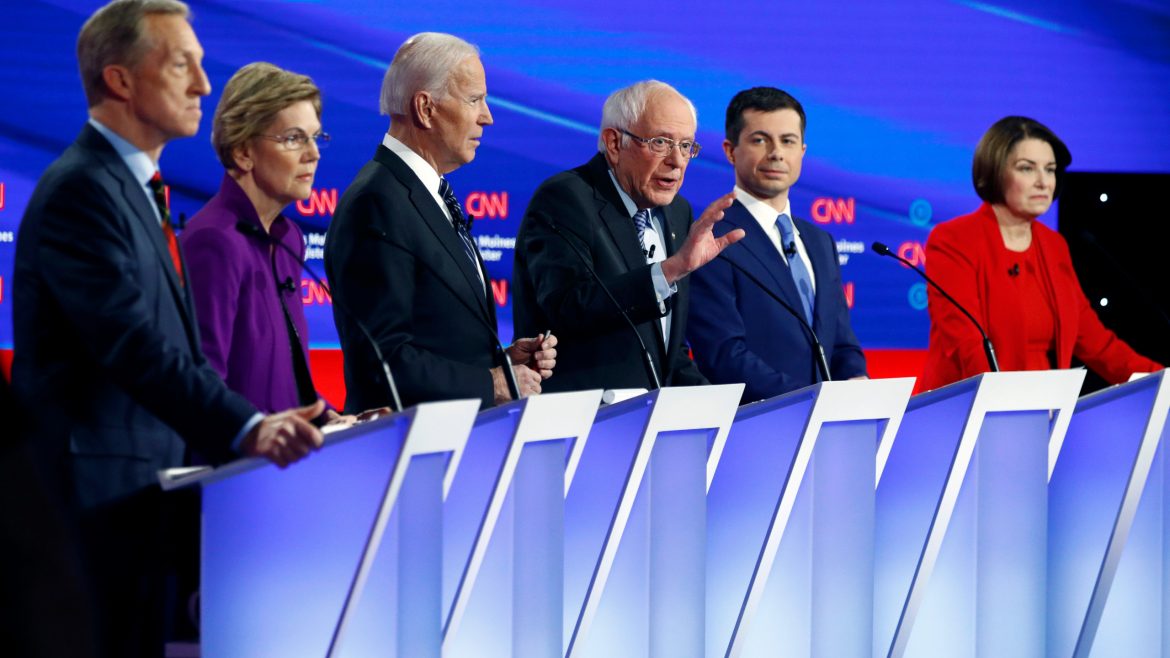 The Washington Post recently noted that there arenâ€™t any centrists running in the Democratic Primary for President. All of the Democratic candidates are progressives. That includes Joe Biden, the leading so-called â€œmoderate,â€ whose policies would move America far to the left. Biden wants tax increases twice as big as Hillary Clinton proposed in 2016. As McClatchy News Service notes, â€œOn nearly every major issue, Biden has either exponentially increased the scope of what Clinton proposed or advocated for new ideas that most Democrats would have up until recently considered fringe,â€ embracing â€œan unabashedly liberal agenda.â€

Bidenâ€™s tax hikes would raise about $3.4 trillion over a decade, slightly less than half of the $7 trillion in total tax hikes proposed by Buttigieg. Warren, meanwhile, would raise taxes by at least $26 trillion. Some reports put the figure as high as $30 trillion. Sanders estimates his health care plan alone could cost as much as $40 trillion.

That makes Biden look like a moderateâ€¦Yet as The New York Times reports, Bidenâ€™s proposed tax hikes are more than double what Hillary Clinton called for during the 2016 campaign.

As a political analyst at Morning Consult, a leading surveying firm, notes, â€œThe Democratic presidential campaign spending plans have 10-year costs ranging from $4 trillion to more than $50 trillion. Even $4.1 trillion in new spending proposed by the Biden campaign dwarfs the $1.45 trillion proposed by Hillary Clintonâ€™s 2016 campaign.â€ Like his competitors, Biden has proposed even more spending than tax increases: His tax hikes donâ€™t pay for all of his planned spending, which would increase deficits by at least $700 billion over a decade.

The Democrats proposals echo progressive criticisms of Donald Trumpâ€™s supposed â€œausterity.â€ But this austerity is imaginary: Trump has allowed federal spending to increase faster than inflation, and even non-military spending has increased. Under Trumpâ€™s proposed budget outline, federal domestic spending would rise by $2.15 trillion over the decade from 2020 to 2030. There would even be a $150 billion increase in discretionary domestic spending. His budget proposal would spend about $4 trillion less than Congressional Democrats previously proposed spending over the next decade, but that is because the Democrats seek to increase spending so rapidly, not because Trump would actually cut spending.

But you would never know this from headlines in the news media. NBC titled itsÂ article, â€œTrump to propose sweeping cuts to foreign aid, safety net programs in latest budget.â€ But foreign aid is only a tiny part of the federal budget â€” a little overÂ 1%Â of federal spending.Â  Congress will not adopt Trumpâ€™s cuts to foreign aid. And Trump did not propose â€œsweeping cutsâ€ to safety net programs, but just reductions in the growth of spending on safety net programs. His budget does aim at reducing the rise in spending on disability benefits (Social Security Disability), but by less than 2% of the overall spending on that program. Trumpâ€™s budget also seeks to trim spending on food stamps somewhat, to a level that would still leave food stamp spending much higher than it was prior to the Obama administration. These changes proposed by Trumpâ€™s budget are unlikely to be approved by Congress or become law. You have to read deep into news articles to find out that federal spending would continue to grow even under Trumpâ€™s proposed budget.

The Democratic candidates also are well to the left of past Democratic candidates on subjects such as education and criminal justice. For example, Biden wants to ban standardized testing in public schools, which he falsely believes is racist. By contrast, past Democratic Presidents such as Bill Clinton supported increased standardized testing as a way of measuring whether students were actually learning the curriculum and being given an adequate education. As Clinton put it, test results â€œgive us a road map to higher performanceâ€¦.weâ€™ll have to hold all of our students to higher standards as they grow older and measure the schools and the students against the standards.â€ For similar reasons, President Obama supported the expansion of testing until 2015, when he called for scaling back the number of such tests.

Bidenâ€™s opposition to standardized tests reflects the belief among some progressives that standardized tests are racist because they are culturally biased and thus understate minoritiesâ€™ chances of succeeding in their studies. But research shows the opposite is true. Standardized tests such as the SAT actually overstate black studentsâ€™ subsequent achievement. As Princetonâ€™s Russell K. Nieli notes, â€œOnce in college blacks with the same entering SAT scores as whites and Asians earn substantially lower grades over their college careers and wind up with substantially lower class rankings.â€ That is true even when standardized tests are considered along with other factors in admissions, such as applicantsâ€™ â€œhigh-school gradesâ€ and â€œsocio-economic status.â€

Current Democrats have a much more confrontational attitude toward business. Biden has called for jailing energy executives if they fail to achieve federal mandates, and for jailing insurance executives for misleading advertising or paying for patientsâ€™ opioid prescriptions.
Other Democratic presidential candidates are even more hostile than Biden to business in general, and energy companies in particular. Warren and Sanders support taxes on financial transactions, and on accumulated wealth, that would shrink the size of the stock market and peopleâ€™s retirement savings, not just the fortunes of wealthy CEOs. Warren and Sanders also support the Green New Deal, which would  cost taxpayers an estimated $90 trillion. Unlike Biden, they also want to eliminate nuclear energy. That means shutting down clean, carbon-free nuclear power plants. Nuclear plants generate nearly 20 percent of Americaâ€™s electricity and 63 percent of its carbonâ€free electricity, and have a lower mortality rate per unit of energy produced than any other form of energy. Wiping out nuclear power would not only harm the economy and make our power supply less reliable, but also make achieving a green economy even harder.

Many Democrats used to recognize that large minimum wage increases could wipe out jobs, as did liberal publications like the New York Times.

But today, all of the Democratic presidential candidates support a minimum wage of at least $15, even though there are hundreds of rural counties in America where living costs are so low that middle-class people can live on less than $15 per hour. In these counties, the median hourly wage is below $15 per hour, yet most people there manage to own their own home. Employers there cannot afford to increase wages a lot, because the profit margin of a typical employer is only a few percent of its revenue. Thus, a $15 minimum wage would wipe out middle-class, living-wage jobs in many rural areas. Yet Democratic presidential candidate Tom Steyer wants to set the minimum wage at $22 per hour, which is well above the median wage in most of Americaâ€™s counties.

Such high minimum wages would result in tax increases and consumer price increases as well as major job losses. In 2016, Californiaâ€™s legislative analystÂ estimatedÂ that the gradual increase in Californiaâ€™s minimum wage to $15 an hour wouldÂ cost taxpayers $3.6 billion moreÂ a year in government pay alone. A $15 minimum wage also increases the cost of the products that everyone purchases. As economist James SherkÂ notes, â€œEconomists find that businesses pass minimum-wage costs on to their customers by raising prices.â€ As the Associated PressÂ reported in 2018, â€œPrices rise as the minimum wage increases.â€ Large minimum wage hikes also wipe out jobs. Economists predict that Maryland willÂ lose 99,000 jobsÂ as its minimum wage gradually increases to $15 over six years. Since Maryland has only 2% of Americaâ€™s population, the national job losses of a $15 minimum wage would be far bigger, probably around 5 million lost jobs.
Moderate Democrats are also going extinct at the state and local level. That is true even in southern states such as Virginia, where there used to be conservative Democrats. Now, Virginia Democratic legislators consistently favor progressive policies. They have uniformly supported measures increasing state spending at aÂ rapid rate. They have also uniformlyÂ supportedÂ a $15 statewide minimum wage. It will become law soon, and will likely wipe out countless jobs in the stateâ€™s rural areas, andÂ shrinkÂ the size of the economy. Virginia Democrats have also uniformly backed new laws thatÂ stack the deckÂ against employers in many discrimination cases, and impose onerousÂ new red tape and record keeping burdensÂ on many businesses. And they have supported legislation that would allow many prisoners, includingÂ some murderers, to be released from prison.