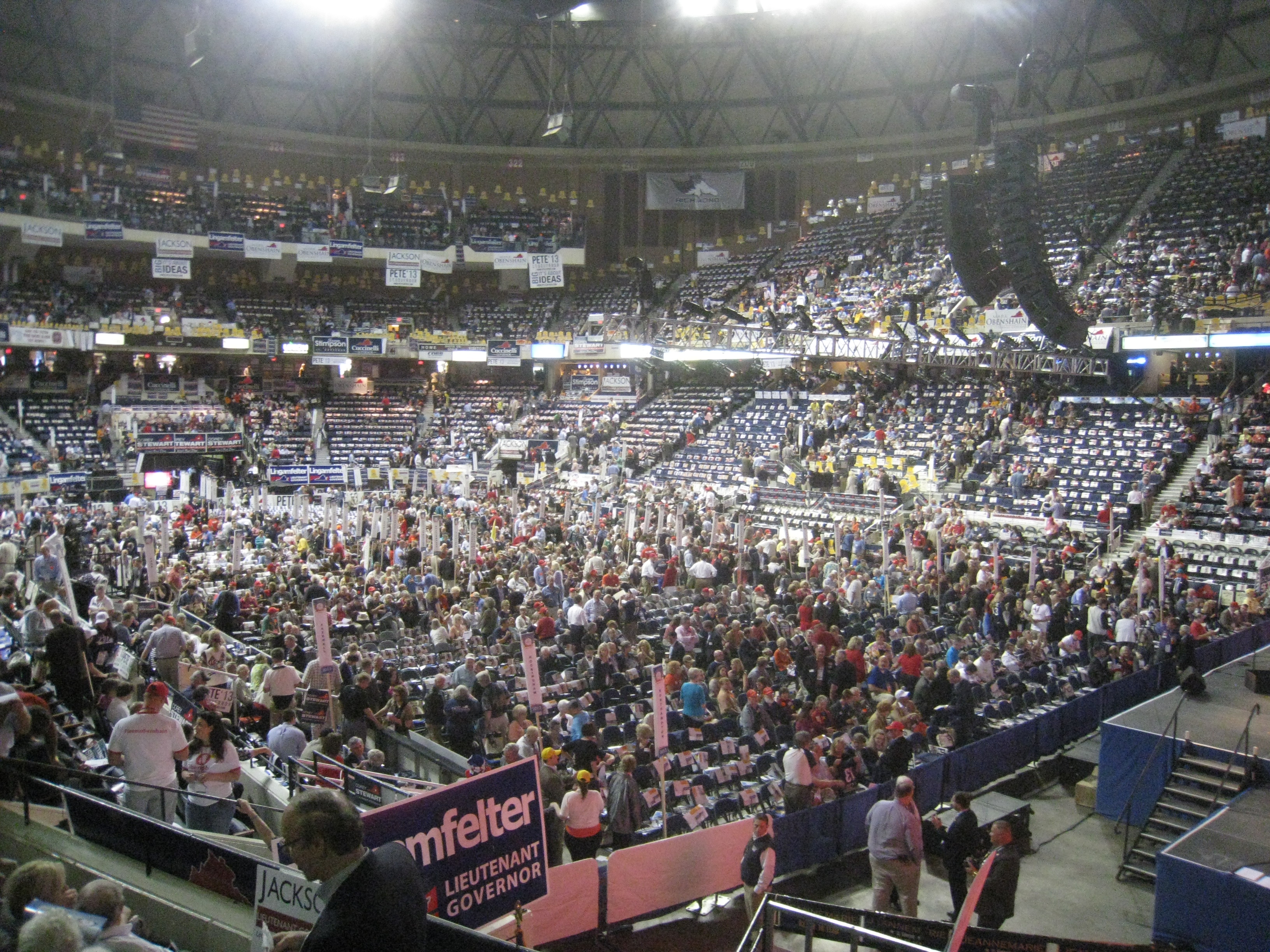 A big decision is in front of the RPV State Central Committee on Saturday. My colleagues should make their decisions on the basis of actual facts, not wild conjecture.[read_more]

A lot of passions flare about the primary vs. convention issue and, unfortunately, many of the most passionate are severely misinformed.

As a member of the State Central Committee that will be deciding this issue on Saturday, I am being inundated with emails and phone calls from all sides.  Below I address some of the most common myths being circulated about this issue:

Myth #1:  “We shouldn’t have a Convention in a Presidential year!  That would be a disaster!” Regardless of how the State Committee votes this weekend, Virginia Republicans will have district conventions and a state convention next year to elect delegates to the National Convention.  Yes, you read that correctly.  Our rules require us to elect delegates via the Convention process.  What is at issue is how or whether to bind the votes of those delegates at the National Convention (whether by a state-run open primary, or by a Republicans-only Convention process).  Myth Busted.

Myth #2:  “We can’t let those crazies at RPV switch from a Primary to a Convention!”  Folks, using a Convention to bind our delegates to the National Convention is nothing new, and adopting a convention for 2016, instead of a presidential primary, is not “switching” to a convention. Since 2000, the Party has had the choice every four years about what method is used to bind our delegates.  We’ve made the choice for a primary in only 2000, 2004, 2008, and 2012.  EVERY prior presidential election year we bound our delegates via a Convention.   The only difference between the proposed 2016 Convention and what happened over the vast majority of our history is that the proposal is to move the Convention up on the calendar to have a greater impact.  That’s literally the only difference.

So, not only is adopting a convention not “changing the rules in the middle of the game,” as some have suggested, it is also not anything new, dangerous, mysterious, novel, revolutionary, untested or any of the scary things convention opponents say it is.  In fact, a presidential primary where Democrats and other non-Republicans can easily participate is the anomaly over the Commonwealth’s history, and having had it foisted on us by the self-interested lobbyists and consultants who used to run our Party has proven extraordinarily divisive.  Myth Busted.

Myth #3:  “Having a Convention would ‘tear our party apart.'”  Unless you’re into making self-fulfilling prophecies, this is nonsense. We have contested votes, then we move on and advance the Party the best ways we can.  If the vote doesn’t go my way, that’s fine…I’ll do my best to help our Party fundraise and reach our activist base without the most obvious tool to do so, and will try again next time.  However, some opponents of Conventions disagree with that kind of unifying approach, and are essentially threatening to burn the house down if they don’t get their way.  (Sense a pattern?)  The way I see it, the torch is in their hands, not the hands of people backing Conventions.  Myth Busted.

Myth #4:  “If we have a Primary that means I get to vote for President without having to go to any meetings.”  Contrary to widespread perceptions, just because it is called a primary doesn’t mean that Virginians’ votes are tallied against votes in other states to determine the party’s nominee. In reality, we don’t vote for president (and fully bound electors) until November 2016. Until then, ALL of the processes here and in other states are about electing and binding delegates to the Republican National Convention to be held in Cleveland next summer. In other words, we’re going through a process of electing representatives to carry our preferences to a representative body. And, unlike any other election in recent memory, next year’s National Convention may actually matter, as we have a strong field of candidates who could conceivably deny any single candidate an outright majority by the time of our National Convention. In other words, who gets elected as your delegate actually means something, as it is their judgments and preferences that may decide the outcome. Myth Busted.

Myth #5:  “A Convention would disenfranchise me!”  First, let’s get past the idea that Conventions are somehow illegitimate because not every single Republican can attend.  It is a representative body that is no more undemocratic or disenfranchising than electing representatives to the General Assembly, or sending only 49 delegates to the RNC (instead of the hundreds of thousands of voters who might participate in a primary).  Am I disenfranchised when the National Convention takes votes without allowing me to participate?  No, and it would be preposterous to suggest otherwise so long as I had the opportunity to vote for those representing me.  The same principle applies to district and state conventions.

Second, everybody from all over the state can participate locally in electing those delegates by attending local mass meetings (called caucuses in Iowa and elsewhere).  When people talk about “just” 14,000 people potentially choosing how our delegation will be bound, they are leaving out the tens of thousands (or more) people who elected those 14,000 delegates.  So all the tropes about the burdens of participating in a convention and packing suitcases and trekking across the state, blah blah blah, in order to participate are either ignorant bloviations, or purposefully dishonest deceptions.

Moreover, if you want to talk about having your vote count, let’s talk about how in a primary with perhaps as many as 8-12 candidates on the ballot, a candidate with a plurality of, say, 19% of the vote could win, leaving meaningless chunks of delegate votes split among all the other candidates.  A Convention, by contrast, can use an instant runoff voting system to ensure a consensus candidate emerges, one who could gain the backing of over 50% of the voting delegates.  Myth Busted.

Myth #6:  “A Convention would mean financial ruin!  The Party loses money on Conventions!”   Ahh…where do we begin on this particular pearl of misinformation?  First, Conventions don’t lose money.  In fact, they have historically been the Party’s largest fundraising tool.  We’ve made money on almost all Conventions, including the disaster that was 2013.  Only in 2009, just after the RPV Chairman was ejected and control of the Convention was handed over to the McDonnell campaign, did a statewide convention lose money.  And that was only temporary, as McDonnell later gave enough to RPV for a break-even.  McDonnell essentially gold plated that Convention, and spent in the neighborhood of $125K of the Party’s money just on audio/visual stuff and stage decorations!  Compare that to about $23K spent for similar functions at the 2014 Convention and you get a sense for how outlandish that was.

Second, between presidential candidate filing fees, voluntary delegate filing fees, and the host of other fundraising opportunities available at a Convention (suites, dinners, sponsorships, etc.) RPV would raise not only more than enough to ensure smooth operation of the State Convention, but also enough to lend significant logistical and training support to local Party units for their delegate elections.  Even after that, RPV would be on a firmer financial footing than we’ve been on in a decade, just in time to help win Virginia for our nominee next year. Myth Busted.

Myth #7:  “The only people pushing for a Convention are those Tea Partiers and libertarians who have infiltrated the GOP!!”  Ugh.  First, contrary to what you might think by reading news accounts from journalists either too lazy to report accurately or too invested in a false narrative, not everybody to the right of Mitch McConnell or Eric Cantor is a tea partier.  In fact, most of us are just Republicans, and have been for a long, long time.  It’s not exactly a new thing in the GOP to oppose excessive taxing and spending.

Second, in the fevered imaginations of some older elements of the GOP, the State Central Committee has been taken over by a cabal of Paulbots intent on destroying the Party, and that the push for a Convention next year is all because it is perceived Rand Paul will outperform in that setting.  Nothing could be further from the truth.  Although it is likely true that Paul would do better in a Convention than in a Primary, most (probably the vast majority) of pro-Convention conservatives on the Committee clearly prefer other candidates, including most prominently Walker, Rubio, and Cruz.  Just this past weekend I hosted an event for Carly Fiorina (while still sporting a 2012 Romney sticker on my car).  So, not only is the pro-Convention crowd not a bunch of space aliens bent on world domination, we’re actually pretty representative of the people who elected us.  Huh…imagine that.  Myth Busted.

Myth #8:  “The timing of the Convention is impossible.”  Some are complaining that moving the State Convention up on the calendar to the middle of March presents a scheduling impossibility for local units to hold their mass meetings (or conventions/canvasses) to elect delegates in time.  Respectfully, this is bunk.  The RPV call goes out in December.  Unit calls then go out in early January for processes to be completed by the end of February, with district and state processes the next month.  Certainly, this is compressed compared to normal, but it is still more than enough time (even in jurisdictions that use a local Convention to elect delegates) to plan and execute.  You’ve got 5 months notice, for goodness sake.  Myth Busted.

Myth #9:  “Too many people will show up at my mass meeting!”  OK, it may be true that we’ll have a lot of people showing up to participate.  Last time I checked, though, having more people actively engaged enough to show up at a GOP function was a good thing.  It will place a premium on planning and securing appropriate venues.  Under the proposed Convention plan, RPV will provide significant help in this regard so that local units are not caught off guard or ill-prepared for what could be record-breaking attendance.  Still, the large numbers will be a challenge we’re going to have to deal with.  Myth Plausible.

I will keep this updated as more myths roll in.

UPDATE 1:  Myth #10: “A primary is the only way we’ll get the data necessary to win!” I’m sympathetic to this argument, as I know RPV/RNC data has a long way to go to match what’s available to the Democrats. But if we’re relying on a low-turnout event like a March primary to solve our data woes, we’re going to be sorely disappointed. Why? Because we’ll have perhaps what, 500,000 people vote?  700,000? That’s compared with the over 2 million votes that will required to win Virginia in November. While I concede these data would be pretty valuable for that, I think the people likeliest to vote in a presidential primary are by and large the same people who are already reliably captured by our data, and that the marginal gain doesn’t necessarily exceed the data benefits of a Convention (i.e., central collection, for the first time ever, of all delegate information and of the extensive data on the tens of thousands of people who will attend local mass meetings…a complete census of our GOP activist base).  Still, this isn’t an invalid argument. . Myth Somewhat Plausible. [NB: Thanks to one of the best readers and critical commenters, Patrick Murphy, for challenging me on this.  I stand corrected.]