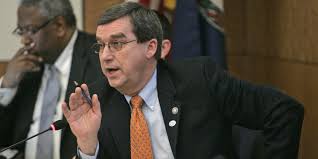 No Charges In Phillip Puckett Investigation

The US Attorney’s office will not file any charges in the Phil Puckett case. The federal investigation has been terminated. [read_more]

â€œAfter reviewing the facts gathered during the investigation, considering potentially applicable statutes, and consulting with the Public Integrity Section at the Department of Justice, we have decided not to pursue federal criminal charges for acts surrounding Senator Puckettâ€™s resignationâ€ U.S. Attorney Timothy Heaphy said in a letter released Friday afternoon.

â€œWe are accordingly closing our investigation of this matter. Should new information arise from any source, we may reopen the investigationâ€ and reconsider the decision, Heaphy wrote to lawyers representing principals in the case.

We all remember the firestorm created by Phil Puckett’s resignation which threw the Virginia Senate to Republican control and thwarted Governor McAuliffe’s goal of expanding medicare. Part of McAuliffe’s response to the resignation was telling Puckett to ‘rot in hell’. Â Senator Warner also got involved with possible job offers for Puckett’s daughterÂ if Puckett would remain in the Senate.

In a letter sent Friday from Timothy J. Heaphy, U.S. attorney for the Western District of Virginia, said he would pursue no criminal charges in the matter. Â The letter is here.Â

This was an example in the legal but sleazy ways that politics work.

or the fact that nothing bad happened

Senator Puckett has been around long enough to know how slimy his own party had become. Thankfully, he was smart enough to keep the blue dress as insurance in case his own party tried to lie and punish him for something he didn’t do. Bet they didn’t see that coming!

Anyone going to investigate McAuliffe’s Chief of Staff for offering judicial appointments in exchange for votes? ANSWER: No. Democrats don’t go to jail, just Republicans like McDonnell….the only difference is that there was no “exchange” in the McDonnell case because he didn’t do anything for the rich gift giver.

Must have lead to bad news for Warner and McAuliffe? Had it proved something shady by the Republicans it would be prosecuted post haste!