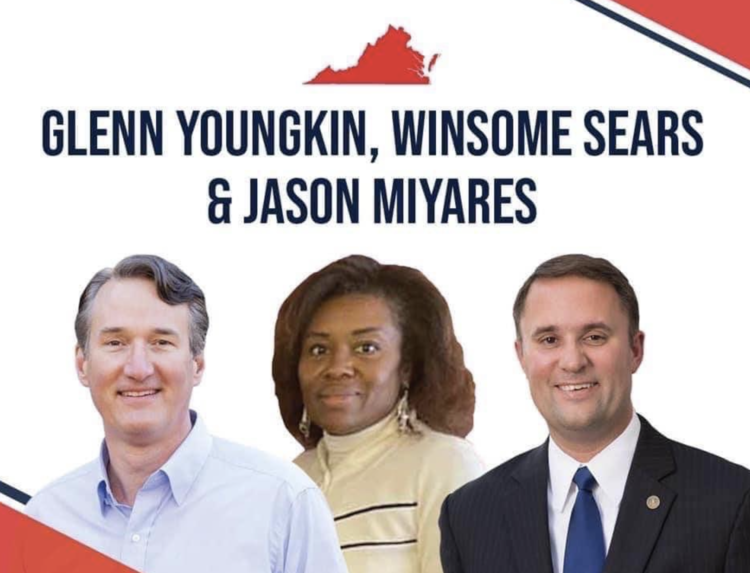 As we enjoy the Holiday Season, many of our friends and neighbors are living under a dark cloud of uncertainty. They are wondering if they follow their conscience on medical decisions and decline to participate in the Covid vaccine experiment, will they be punished and have the ability to live freely gradually taken away as we see happening in other countries like Australia.

Throughout their campaigns, Governor-Elect Youngkin and Attorney General-Elect Miyares and Lieutenant Governor-Elect Sears promised to oppose mandatory vaccination and vaccine passports. These positions undoubtedly played a role in their historic, come-from-behind victories.

Virginia voters have spoken: We are a state that opposes oppressive government overreach and supports medical freedom. We call on the future governor and attorney general and Lieutenant Governor to make good on their campaign promises and take action to protect Virginia citizens from discriminatory practices in response to their private vaccine decisions.

If an elected official says I’m pro-life or pro-gun and fails to act, the words ring hollow. Governor DeSantis in Florida and Governor Abbott in Texas are taking action on behalf of their constituents. Let’s hope our newly elected team in Virginia will do likewise.

Please sign the petition below and help send a message to our state leadership in Virginia was last modified: December 28th, 2021 by Guest Contributor Marsha Lessard

Marsha Lessard is the founder of Virginia Freedom Keepers. VFK is an organization that focuses on true informed consent and opposes all medical mandates. Marsha is a former law enforcement officer, Army wife, and proud mother of four homeschooled children. She has multiple degrees from Johns Hopkins and is currently in a clinical program that focuses on holistic health.

It should be a persons right to choose.

I am not working anymore, but I think this is wrong. This virus has a close to a 100 percent survival rate. Also, there are other drugs to treat COVID with, that work. In addition, the vax is dangerous.

I don’t want the ZOMBIE shot but looks like youngkin is just another worthless mcauliffe in a different color coat!!!!!!

Please stand with personal choice and no mandates !! Let our workforce choose and no firing !!

My body my choice!

Legisiators constitutionally do not have the authority to legislate the behavior of the sovereign people.

The vaccines and masks DO NOT WORK. People AND children are dying from them. I was a health care worker for 25 years and refused the flu shot every year except 1, when I was out sick 2 weeks with the flu which I got from the shot…..

Had a relative to get the shot and died of a stroke! BLOOD CLOT!! Why aren’t these

It is actually law, that a religious exemption is acceptable. I have to actually write it down. This is how liberals pass something and tell us we can’t avoid it when actually we can. It is also a Nuremberg code after WW2 that says a government can’t make law of a medical procedure. Biden administration is breaking world law.

Stop all mandates for vaccines for every person in Virginia! Unmask our children and everyone else as well! Pass a law like governor Abbott passed in Texas no one can meddle in our medical records. no employer, no business , no one

Stop the mandates and lock downs.

I wholeheartedly agree! No vaccine mandates, no lockdowns!

I have already been forced to get vaccinated, to keep my job!! I did it unwillingly to pay my bills!! We must hold theses employerâ€™s accountable!!!! This is wrong !!!

No mandates or passports, please!

Rescind the vaccine mandates, make the school board open the schools. Get the pornography and pedophilia out of school libraries.

Governor elect Youngkin, I hope you keep your campaign promises. I believed you and pray you will not be another untruthful politician.

The vaccine is not preventing covid infections or is it preventing transmission of covid!
Anti viral drugs and monoclonal antibodies moderate covid and need to be available and used when needed.
Vaccine mandates are nonsense! Mask mandates are useless!

No mandates on masks or vaccine. No travel restrictions. Mask and vaccines are not preventing this virus. Do not want illegal, over reaching big government in Virginia.

Keep your word , no mandate. You were elected to protect Virginia. Thank you

Please protect our rights and do not support the vaccine mandate. Iâ€™m a nurse and have always protected the rights of my patients and now
Feel
My own rights are being violated.

I am hopeful that after you are sworn into office early next year, you will prayerfully consider seeking Godly guidance and wisdom when uncertain how to proceed in any matter. It pleased God when Solomon asked for wisdom in governing Israel and it was readily given. May it be so in your governance of Virginia. I voted for all of you and will be keeping you in my prayers.

“Throughout their campaigns, both Governor-Elect Youngkin and Attorney General-Elect Miyares and Lieutenant Governor-Elect Sears promised to oppose mandatory vaccination and vaccine passports.” Yep, pandering to the morons

No mandate. No abortion. Sex at birth prevails. No trans men in women’s sports!

you have adopted how many?

Well they promised to follow the Constitution, and allow for our rights. So how about you let them get in office first, before you push them.

Terrible idea, Martha. Local “leaders” don’t have any more right to deny me liberty and my rights than Northam did! I want our Republican leaders to protect the rights of all citizens in our Commonwealth. Me included. No inoculation mandates, no mask mandates, no anti-2A laws, and no sanctuaries for illegal aliens. Our Governor elect needs to lead!

lots of vaccines are required, have been for decades

But with more thorough testing. I’m not against vaccines, and have had all my “baby shots”, but the FDA does get things wrong in the best of times. According to the VAERS government sight, there have been over 739,000 adverse events and reactions from the Covid vaccines in a year’s time. So I’d prefer to wait.

Virginia voted for conservative government with all of the Constitutional rights and laws. We donâ€™t want our elected officials to continue with this socialist ideology. No more Big Government!!

Keep your promises …. You were elected to free Virginia …. Soldiers bled that we may be RED

what socialism are you talking about?

Youngkin has promised that he will set no edict or mandate, but leave the decisions up to local leadership across the Commonwealth. I think it’s a brilliant plan, as those who still cling to control and absence of common sense will be clearly identifiable. Combine that with mass migration/recalls of said officials, and we may well see a ‘sea change’ from the inanity of the past.