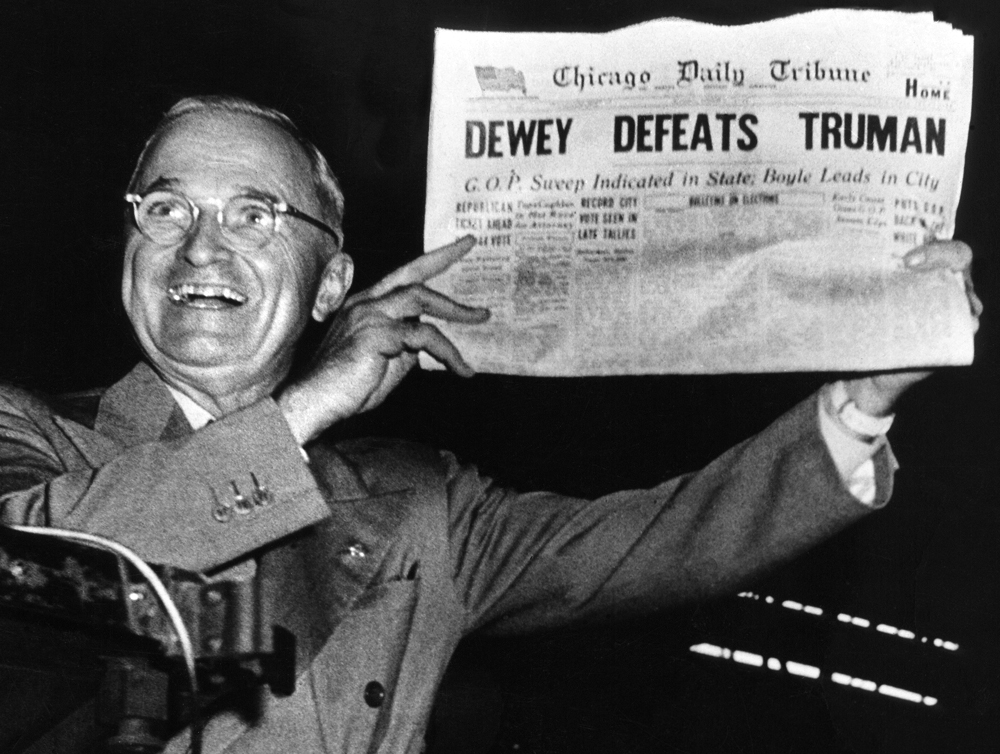 Polls have played an interesting new role in the last two presidential campaign cycles, Instead of trying to present an accurate snapshot of the political landscape at a given time and place, some pollsters seem to be producing statistics to achieve a particular purpose. In 2016, for instance, polls showed Hillary Clinton leading Donald Trump by overwhelming margins, right up to the very week of the election. Pundits estimated Mrs. Clinton’s chance of winning the election at anywhere from 75% to 94%. Members of her inner circle were already consulting with realtors about homes in tony DC neighborhoods and suburbs.

Four weeks before the election, a Wall Street Journal/NBC Poll showed Mrs. Clinton with a 14-point lead. It was “in the bag” – a “sure thing.” Until, suddenly, it wasn’t. In the biggest election surprise since Harry Truman upset Thomas Dewey in 1948, Donald Trump carried the Electoral College by 306 votes to Mrs. Clinton’s 232. So shocked was the political establishment that members of both parties spent the next four years trying to prove that Mr. Trump must have cheated.

It was later shown that the sample in that WSJ/NBC poll included:

But pollster John Zogby found that the actual 2016 turnout was:

Another math-issue in polling has to do with poll “averaging.” We hear about it all the time in media reports. Recently I asked a close friend how he would average a dozen polls, if he had the percentages for Mr. Trump and for Mr. Biden from each. His answer was: add up the percentages for Mr. Trump and divide by 12; and ditto for Mr. Biden. This is a perfect demonstration of my old math prof’s axiom:

For every problem there exists a solution that is simple, elegant, and completely wrong.

In fact, you can’t “average” polls accurately in this way unless the sample-sizes are exactly the same for all the polls. Since that’s unlikely, you must compute three distinct sums:

T = total number of people sampled in all polls

D = total number of people for Mr. Trump in all polls

J = total number of people for Mr. Biden in all polls.

Then Mr. Trump’s percentage = D/T and Mr. Biden’s percentage = J/T. You don’t see this detail in reports which present poll averages – probably because the reporters don’t know that the calculations must be made in this way. This is just arithmetic, not high level math. But my observation of how many people don’t understand it suggests that some reporters might be in that company, too.

This brings us to the present. As in 2016, polls are again showing Mr. Biden with a 14-point lead over Mr. Trump, and we’re hearing that “it’s in the bag for Joe.” Some waggish “reporters” (if that term should even be used) are suggesting that Mr. Trump should concede now and save us all the time and expense of an election that he is certain to lose. As Yogi Berra famously said, “It’s Déjà vu all over again.”

But this repeat-scenario leads us to wonder why pollsters persist in issuing polls which show big leads for Mr. Biden, since previous experience showed that their sampling methods are likely to be wrong. And more to the point, why keep issuing these polls when the prevailing political climate shows no overwhelming support for Mr. Biden? Where are those huge crowds that should be coming out to hear Joe? As Mr. Trump might ask, what’s the deal?

My answer has two aspects. First, we all know that we’re in the Internet Age. Expert pollster Zogby notes that today anybody can put together a poll of unknown veracity and post it on the Internet. So we’re up to our hips in polls. Consequently, almost any desired political picture can be painted by choosing from the vast field of available polls. What’s needed now is reliable expertise to separate wheat from chaff, but not much of that is available. In the past we assumed that polls were honestly fashioned. But today, not so much.

Second (and more darkly), it’s possible that polls are now being employed as tools in an information-strategy that Nazi Propaganda Minister Josef Goebbels called “the big lie.” In this construct, public attitudes are influenced – and hopefully shaped – by repeated publication of reports which the issuers know to be false. Goebbels realized that he could use the new radio and film media to broadcast a lie loudly enough (and often enough) that significant numbers of people would believe it. Lies like “We lost the Great War because traitorous Jews stabbed our soldiers in the back” were repeated often enough to become accepted Nazi dogma, which led to disastrous government policies.

A political faction keeps reporting that Joe Biden is rolling toward a landslide win over Donald Trump, when a child could see that the claim is very dubious. Why do that? It looks like a modern application of the Big Lie. Mr. Biden’s allies hope that broadcasting these polls repeatedly will convince Trump-supporters that all is lost, and cause many to stay home and not vote. The plotters hope this will turn the election Mr. Biden’s way.

Will this Nazi-esque strategy work? Well…maybe. In politics anything is possible. But is it likely to work? Color me doubtful. From here, it looks like all the Biden-camp has to offer is:

Does this look like a campaign pulling a 14-point lead over an incumbent who gave Americans the greatest economy in their history? Seriously?

Finally, let’s check those 2016 election turnout percentages again. They show that 34% of the voters were Republicans. Has anyone wondered why that percentage was so low? From here it looks like quite a few Republicans stayed home, while a gang of independents stepped up and carried Mr. Trump over the finish line. The Donald was an outsider and an unknown quantity. Democrats claimed that he was a Russian agent. GOP leaders offered very tepid support, or no support at all. Some even came out for Hillary. House Speaker Paul Ryan recommended that his Republican representatives “vote their consciences.”

What does all that tell us? I believe it suggests that the election-turnout might be different this time. Mr. Trump is no longer an unknown quantity. He has a record – a good record. He revived the economy, took us out of endless foreign wars, crafted better trade-deals, and recognized the threat posed by China. His pro-life support has been impressive. Christian, Jewish and Muslim leaders recognize that he is the best friend religious people have had since Abe Lincoln. He has also exercised strong, confident leadership through four years of the most disrespectful treatment of a president that I’ve seen in 68 years observing politics.

Mr. Trump is a serious tough guy in an office – and at a time – where that kind of leader is sorely needed. Democrats hate that, but the voters who took a chance on Mr. Trump understand and value it. They know what he’s done for them, and I’ll be very surprised if they trade the prospect of four more productive years for whatever Joe is selling. (By the way, I heard that Joe is not Donald Trump.)