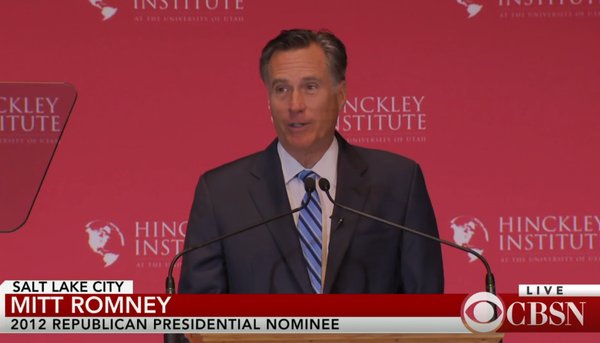 written by Taller Than Madison March 4, 2016

Today Mitt Romney decided to chime in on the presidential race. More specifically, Romney decided to go after Donald Trump. His speech was meant to rally Republicans around anyone but Trump but all it will do is strengthen Trump now and hurt him hard in the fall. Should Trump become the Republican nominee, this speech will be featured in a Hillary Clinton campaign ad, bet on it.

Romney took to the podium today as one of the “kind of” leaders of the Republican Party. “Kind of” because he was the last candidate the GOP nominated for president, but a lot of us didn’t like him then and we certainly don’t listen to him now. Nevertheless Romney has a following. His press conference today was designed to speak to that following, but did he think they hadn’t heard those lines already? We know the case against the fake conservative, silver spoon, real estate tycoon. Romney said absolutely nothing new. We get it.

Trump supporters seem to look pass the lack of bona fide conservative credentials and focus more on how Trump is shaking up the establishment. Well, Romney’s speech plays perfectly into the narrative that the establishment is out to get Trump. Romney resorted to name calling, he did not offer specifics, and he just cried about the sky falling. Romney’s words will sway zero Trump supporters toward another campaign and they won’t bring out anyone new to any of the competing campaigns.

At this point in the calendar Romney’s speech will only strengthen Trump’s numbers in the primary. Romney is not considered a stalwart conservative; his people are not Republican primary voters. But at a later point in the calendar, Romney’s words will be used to hurt Trump and they will have an impact. Expect a Clinton ad to run with black and white, grainy images of Trump partying with unpopular celebrities, like Tom Arnold (photo linked here), while we hear Romney saying that Trump’s “domestic policies would lead to recession. His foreign policies would make America and the world less safe. He has neither the temperament nor the judgement to be president.” This will turn off Republicans who only come out in general elections during presidential years. In certain swing states where the total will be close, Romney’s speech, in a well-made commercial, could have a significant impact.

And the worst part is Romney was too gutless to endorse a candidate, which made his rallying cry needlessly perplexing. Romney said we need to rally behind one of the candidates, but he is not offering any leadership if he doesn’t identify which one to rally behind. Keeping the field spilt helps Trump and all three of Trump’s competitors do not have a viable path to victory, so why not, at this point, pick a candidate?

Mitt Romney did not have to step forward, but he unfortunately did. It is too late in the calendar for this to impact the primary electorate, but it will hurt Trump if he becomes the nominee. Romney’s speech was a mistake. If you missed it, you can watch it here. Or, if Trump wins the nomination, then you can hear it again in a Clinton commercial, coming soon to media markets everywhere.

Romney Likely to Star in Clinton Ad was last modified: March 4th, 2016 by Taller Than Madison

He started the speech stating he was not running, and proceeded to pretty much warn the convention that he might. Does anyone NOT think all he would do is guarantee the election to Clinton, or even Sanders?

With Republicans like Romney and Ryan, who needs dems?

Romney came across scripted and almost identical to Rubio’s talking points. The sheer hypocrisy of his speech only further enhances and validates Trump’s support

I really just don’t get it. What the hell was the GOPe hoping to accomplish?

Trump voters absolutely DESPISE politicians like Romney. To them (and a lot of others for that matter) he represents everything that is soulless and wrong with the party. This little stunt will do nothing but strengthen their resolve.

The GOP’s complete and utter lack of self-awareness boggles the mind.

Romney is getting ready to be sprung on us by the GOPe at a brokered convention. This is why he endorsed no one, and why he was doing his own little very best to sound “presidential.”

Is that even possible?

I remember hearing that in order to get the nomination at the convention you have to win a majority in at least 8 states. Somebody correct me if that’s wrong.

Well you have to fully respect what President Romney has to say… oh wait.. that’s right.. he lost a winnable election to Obama…

So… he directs this speech at Trump. Maybe he should have done something like this sort of thing directed at oh I don’t know… OBAMA in 201`2.

Trump has to pledge not to run a 3rd party candidacy and the GOPe is attacking him in a greater effort than they ever direct at a $%^ing Democrat.

I don’t seen how you vote for the GOPe in the future. Open Borders, Crippling Trade Agreements, Acquiescing to Culture Leftism, crony capitalism as on display with that POS W Bush’s bailouts… Hell the SOBs will take your guns when the Democrats decide it is time.

Mittens, siddown and STFU. We held our noses and voted for you once and WE WON’T BE FOOLED AGAIN!

Of course Romney endorsed a candidate. Romney. And with the FBI grant of immunity to the low level Clintonite, the stage is set for a staffer to take the fall for Hill.

You are probably right… the skanky Department of Justice with all its slimy lawyers are probably crafting the strategy you are suggesting here to throw someone under the bus for Clinton.

This was a terrible mistake. Romney’s speech did nothing but remind voters how much they dislike the establishment. That can only help Trump. We really are the stupid party.

The GOPe might not exist soon. They don’t seem to be understanding that people are leaving them.

Ok you hate Trump…not a conservative. What pray do tell is a conservative? Paulie Rino yan. The GOPe donors are not conservative either… what crony capitalist cares about limiting government as long as that government is working for them to do things like give them endless supplies of cheap foreign labor, bail them out when they need it, structure monetary policy to their benefit, and give them billions in government spending.. And of course there are the wars which the GOPe wants to engage endlessly in the Middle East, costing the US trillions in money..ahem WE DON”T HAVE!!!

But that GOPe with its donor class is not getting that their policies are not working for the average American anymore. I wonder if they will join the Democrats… several prominent Neocons have already endorsed Hillary.

Cruz is a conservative. A few points defining conservative: 1) Self-governance with checks and balances (e.g. three branches keep each other in check & nobody legislates except legislative branch; States keep Federal govt in check, etc.), 2) Equality of everyone before the law (i.e. nobody is above the law, and the laws are enforced), 3) Federal government engages in no activity or spending beyond the enumerated functions of the 10th Amendment (and no, the “general welfare” clause is not carte blanche but should be understood correctly) – this means many government departments must be abolished since they are completely illegitimate and their very existence is a usurpation of power. These include Department of Education, EPA, Department of Agriculture, and so forth, 4) Anti-cronyism, 5) Free trade. Protectionism is not free trade – it is the opposite; protectionism is progressivism. Nor is TPP (which sacrifices US sovereignty) free trade. Nor is a minimum wage free trade. 6) Faithful reading of the Constitution according to its actual meaning, not what pop culture would like it to mean today, 7) Strict affirmation of the Bill of Rights, with emphasis on the acknowledgement that these (and some other) rights come from God and are the birthright of every human being – not given by government but merely recognized by it, 8) Fair taxation (proportional, not “progressive”), 9) Balanced budget, 10) Accountable and transparent government – business conducted not in dark corners but in full view of the Sovereign, that is, We The People.

I could agree with all but #6, because of the way it is worded.

i disagree on #2. as an Evangelical/Born Again, he doesn’t believe in homosexuals right to marry whom they love.

You are correct about his position if “whom they love” is a person of the same gender, but what does that have to do with equality before the law?

SJ , you are one of the few that see things as they actually are .
When abortion and social issues are not in the forefront republicans look bewildered on how to get votes.

What pray do tell is a conservative?
I’ve been trying to get a definition for that word, and several others, for years now.
Personally, I think if the discussion could be limited to fiscal issues, you would see many, many people identify as conservative.