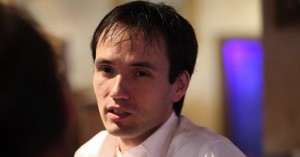 Rob Sarvis, the failed Libertarian Party 2013 nominee for Governor, announced today that he plans to lose a 2014 Senate bid as well.

According to the Lynchburg News & Advance, Robert Sarvis is now the only candidate running for the Libertarian Party’s nomination, to be made at the party’s February 8 convention.

Sarvis is best known for his role as a non-entity in the 2013 Virginia Governor’s race. This year, in the absence of a McAuliffe-style huckster at the top of the Democrat ticket, and where the favorite for the Republican nomination so far has evidenced little enthusiasm from libertarian quarters, Sarvis could indeed prove a spoiler.

Just remember, folks, Sarvis is no friend of liberty:

The more we learn about Rob Sarvis, the more we learn that he is essentially an empty vessel for those poll respondents who would rather not express support for either of the two major party candidates. They really only say they support Sarvis because he’s not Terry McAuliffe, and he’s not the conservative caricature portrayed as Ken Cuccinelli in millions of dollars of Democrat TV ads.

How else to explain support for an ostensibly liberty-minded candidate who calls himself a “moderate”? Or who refuses to take a stand on rolling back expansive government? Who instead, as revealed in the interview below with Chuck Todd, actually endorses the expansion of Medicaid in Virginia under Obamacare?

Seriously…the “libertarian” wants to add 400,000 of his fellow Virginians to the federal teat. But don’t worry…he only favors it after masterminds like himself can work around its margins and institute “reforms.” He talks about tweaks to regulations to increase the number of nurses, and to better manage the autonomy and authority of nurses in the healthcare system. THIS is what the Libertarian Party nominee talks about? Really!?! Instead of tinkering with Leviathan to achieve some utopian ideal, a real libertarian would be trying to put it back in its Constitutional cage where it belongs.

I’ve got news for Sarvis: in case you didn’t notice, there is already a Democrat in the race.

Why would anyone vote for Warner or Kaine. They will take your money in the form of taxes, fees or any other way that they can get it and spend it on their programs. If the program happens to help someone they point it out as a major accomplishment but isn’t that their job.

Nothing wrong with a little competition.

I don’t see how he could be a spoiler. Gillespie is going for the Centre. The reason Sarvis was so effective is that he managed to force Cuccinelli to campaign for the Libertarian block in the Months of October ( when Cuccinelli should’ve been trying to pick up some of the middle)
Also as far as we know Sarvis isn’t on the ballot and unless an Obama bundler is willing to fork some money over for him, he isn’t likely to get on it either.

No doubt Harry Reid and/or his minions are financing this effort. Just goes to show they’re actually worried about Warner.

Every race will have a 3rd candidate trying to draw from the republican.