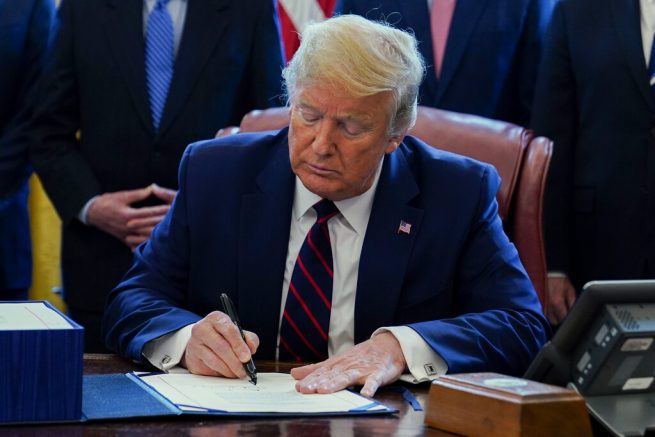 The Real President in the Oval Office

“What a wicked web we weave when first we practice to deceive.”

This week, the House and the Senate will come together under Vice President Mike Pence’s gavel to officially count the votes cast by the various presidential electors of the 50 states.

Congress will either do the very hard, but the right thing, or the very easy, but wrong thing.

The right thing is to stop the process and audit, not recount, the votes from Pennsylvania, Michigan, Wisconsin, Arizona, and Georgia. This process would confirm the obvious; Donald J. Trump won the most historic re-election since Ronald Reagan in 1984 in both the popular vote and the Electoral College.

The wrong thing is to destroy what little remains of the nation’s institutional integrity and confirm the blatantly fraudulent election of one of this generation’s most corrupt politicians, which is saying something in this government, the former Vice President, “Beijing” Joe Biden. (Sadly, the man also has significant cognitive deterioration.)

I have no idea how January 6th in Congress will play out though most “experts” predict the effort will go nowhere fast, or at least they’re praying it won’t. My best guess is that the ruling class and business oligarchs, which most definitely includes the Republican establishment and the conservative think-tank groupies, are part of the effort begun four years ago to end the Trump era by any means necessary.

However, the outcome of 2020 now has nothing to do with either the President or Mr. Biden anymore. That bears repeating – this isn’t about the next president. It is more important than that. It is a declaration of where we are as a nation. Will we have mobster-like gang rule and staged third-world elections? Or will we have the authority of Constitutional law? For the record, I fear the former.

The coordinated and well-planned “law-fare” fraud portion of this election steal began early in 2020 with the incomprehensible expansion of virtually unlimited “vote by mail” schemes. Tens of millions of unsolicited ballots went out under the pretext of the Wuhan COVID crisis, and their “return” was allowed for many days after the election date itself. In most cases, this was ordered by state courts in violation of Article Two of the U.S. Constitution, petitioned for by well-funded radical groups directed by prominent socialist Democrat lawyers in Washington.

Also, there were very obvious machinations in the infamous Dominion voting systems (here for the latest of many findings). The software in this system can be changed locally, according to Dominion executives. And, we learned only this week that the system is made in, where else, China. You can’t make this stuff up, honestly.

And, particularly in Pennsylvania, Arizona, and Nevada, there was also the use of alternate and absentee ballots that cannot stand up to forensic scrutiny or votes cast by phantom or non-residents voters.

The election night steal began with the unheard of and astonishing shutdown of vote counting in the middle of the night, virtually at the same time, in five states. Perhaps it was an act of desperation on the part of the socialist Democrats, who panicked at the commanding wins that President Trump unexpectedly posted in Florida, Iowa, and Ohio, and the large leads he had at the time in Georgia, North Carolina, Virginia, Pennsylvania, Michigan, Wisconsin, and Arizona. (One or more bigwig socialist Democrat must have given that order – who?)

Shazam! Out of nowhere, while the voting was “shut down,” inexplicable tranches of votes, many 95-98% for “Beijing” Joe Biden showed up. Vote totals for the President disappeared in real-time, caught on the national TV screens, while Mr. Biden’s vote totals increased by even larger amounts unrelated to the reporting precincts. Who said miracles don’t happen?

Then the impossible happened, according to dozens of leading statisticians, mathematicians, forensic investigators, and IT experts from across the country, the exact five states required for any possible Biden victory flipped.

Wow, what a coincidence! Uniformly the statisticians, math geeks, and election modelers have said the numbers were “impossible.” One put the odds at “trillions to one.”  Another said it was like Mr. Biden flipping a quarter heads up 100 times in a row.

If you don’t know most of these events already, you’re probably uninterested, or you read the Washington Post or New York Times or watch PBS, MSNBC or CNN, so there is little value at this point going over the Mt. Everest-sized pile of evidence. (Here is a quick reference for those who don’t know any of the details.)

But, the members of the media and politicians (both Democrats and Republicans) who emphatically claim that this was a “perfectly run, clean election” or that they “have seen no evidence of fraud” demonstrate they don’t give a flip about the country, only their privileged status in the ruling class.

The intense and instant acceptance of Mr. Biden’s victory and the total disinterest in even one of the many glaring problems in this election is the “tell” in this con job. And, sadly, it appears the Republican establishment is ecstatic with the way things have turned out. They are only too happy to get back to Washington’s “business as usual.” (Yes, Mitt, we’re looking at you.)

Likewise, those who say that the cases filed in the courts have been kicked to the curb, disproving any fraud that took place, are willfully ignorant or lying. Few courts heard or examined any evidence that could establish cause for a preliminary hearing or discovery. In Nevada, as one of many examples, 8,000 pages of documents (including proof that 42,000 voters double-voted or no longer resided in Nevada) went unexamined by a judge who ruled the day after the filing that there was no case. What does seem clear is that very few courts want any part of this election.

Again, this is now well-plowed information widely available outside of the cabal of national media outlets.

Before the election, the Supreme Court had the opportunity to abort a great deal of the “mail-in mayhem,” at minimum, but instead kicked the Constitutional-can down the road. In a 4-4 decision (story here), the high court ignored the Pennsylvania Supreme Court’s flagrant violation of Article Two, where it allowed state courts to re-make election law on the fly, ignoring the state legislature and state law.

The politically compromised (how one wonders?) and gibberish-inclined Chief Justice, John Roberts (of “the word tax means fee” Obamacare fame) claimed that if there was an issue after the election, the Court could reconsider the suit. Yeah, right.

The dissenting Justice Samuel Alito had separately ordered Pennsylvania that the mailed envelopes with signature and postmark be kept with the original ballots and not be separated so that a later examination could verify their legality.  Of course, officials in Pennsylvania did no such thing.

By not deciding the original case, the Supreme Court has damned future national elections to endless cycles of manipulation and corruption, of which only the United States of America, among industrialized nations, allow. Federal elections will no longer be guarded by Article Two, which provides that only the individual states’ legislatures will provide the means and methods of conducting elections.

Instead, the Supreme Court has ensured there will be a free-for-all, with every activist state court or state commission in the country taking it upon themselves to meddle, fix, append, or manipulate the voting process regardless of state law. Who’s to stop them?

The last four years and this election has amply demonstrated that our judicial system from the utterly corrupt Department of Justice and the FBI, right up to the U.S. Supreme Court, is compromised. Many of us once believed that institution was the brake that would stop the runaway drift of Constitutional government and individual liberty. Now? The law will be what the loudest, most violent, most audacious, or wealthiest say it is.

Outside of the power of God and a revival of the Judeo-Christian ethos across the country, it seems there is no fix.

A line from Sir Walter Scott’s play, “Marmion” comes to mind. “What a wicked web we weave when first we practice to deceive.”