Governor Terry McAuliffe won’t admit it, but his words and actions demonstrate acute awareness of the political and legal obstacles to his stated goal of expanding Medicaid administratively, without approval from the General Assembly. He has lost, but continues to play to the Democrat base.

Say what you will about the Macker, but there is no denying he’s a great showman. McAuliffe announced last Friday that he would veto an amendment passed by unanimous GOP majorities in the General Assembly on June 12 that acted to block the Governor’s ability to expand Medicaid on his own. His press conference announcing his budget veto strategy gave the Macker an opportunity to extend his repertoire from “used car salesman” and general all-around huckster into more dramatic territory, where the intended audience (the Democrat base) wanted to see anger, intensity, conflict, and plenty of righteous indignation. The P.T. Barnum of the Patrick Henry Building did not disappoint. 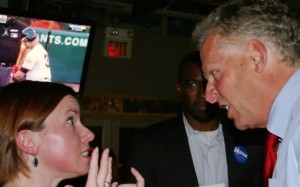 You see, McAuliffe understands that in such situations, to most people it is 90% how you say it, and only 10% about what you actually say. Hence, Friday we saw “Angry Terry” and “Aggressive Terry,” the guy who is taking the fight to those nasty old Republicans and doing what’s right for Virginia, consequences (and the law) be damned.

But if you listened closely enough to what he actually had to say, you will see that McAuliffe revealed himself Friday to be in a position of remarkable weakness. Simply put, he is defeated, and instead of a graceful concession and a call to carry on the fight, we got desperate, grasping bravado designed mask the fact that he just broke his number one campaign promise: not to sign a budget that didn’t include Medicaid expansion.

The first clue of this was the stepped-up demonization of the “House Republican Leadership” (aka Speaker Bill Howell). This is why, for example, the Governor laid into House Republican leadership for pushing the Stanley Amendment despite the fact that, you know, Stanley is a Senator, and the June 12 budget amendment that precipitated McAuliffe’s veto actually originated in the Senate. So why blame the House, instead of the Senate? It’s clear that voices from the House helped convince the moderate GOP Gang of Three in the Senate to back the Stanley Amendment, but this is less about truth and more about McAuliffe’s need to distract attention away from his failure and avoid problems with his base. For that, he needed an easy-to-understand boogeyman (i.e., the Speaker). With Howell cast as evil incarnate, it also makes it easier for McAuliffe to later explain away his failure, as Howell is the man who will orchestrate the frustration of McAuliffe’s unlawful vetoes.

Next, the Governor railed against the Stanley Amendment as “unnecessary given that there is no appropriation for expanded care pursuant to the Affordable Care Act.” This is a completely ridiculous, disingenuous explanation (surprise!). While it is true that, thanks to the Stanley Amendment, there is no longer an appropriation available to the Governor, it is simply not true that he tried to veto the Stanley Amendment because it was “unnecessary.” (BTW, for something so unnecessary it sure has caused a lot of angst among Democrats). In fact, McAuliffe attempted to veto this because it serves as an absolute prohibition of any expenditure not authorized by the General Assembly on or after July 1, 2014 that implements coverage for the population of people made eligible for Medicaid coverage by Obamacare.

But wait, didn’t he just admit that there “is no appropriation for expanded care pursuant to the Affordable Care Act”? Why, yes, he did. Prior to the success of the #BLACKorBUST grassroots movement on June 12, the budget being debated actually did contain an appropriation that would allow expenditure of Obamacare funds on newly eligible Medicaid recipients. But it doesn’t now.

Realizing his inability to change that reality, the Governor made a lot of loud noises about “moving forward with healthcare” and making sure all Virginians have “health coverage.” He said that his administration is working toward that goal, in concert with the feds and the private sector. What he conspicuously DID NOT say is that he’s going to expand Medicaid. That’s because, in the absence of an appropriation, his administration simply can’t cut a check for Medicaid expansion. Instead, McAuliffe wants to use other funds (likely including savings from reforms to the existing Medicaid program) to try to close the “coverage gap” in other creative ways.

And that’s why the “unnecessary” Stanley Amendment is such an obstacle for the Governor. That new language doesn’t just prohibit expenditure of funds made available by Obamacare. It prohibits any expenditures that provide coverage to people made eligible by Obamacare to receive Medicaid. In other words, McAuliffe has all but conceded defeat on actual Medicaid expansion (but doesn’t miss the opportunity to mislead his base to the contrary). Now, he’s resisting the Stanley Amendment because it serves as a block on ANY unilateral action the Governor could take to mimic Medicaid expansion through other means.

The General Assembly is convening this evening to take up the Governor’s vetoes. The House session begins at 5:00 PM and the Senate begins at 7:00 PM.  Sources close to the decision confirm that the House will not actually consider most of the vetoes, which will be held to be out of order as unconstitutional.  We’ve written at a general level about why that’s the case here, while Brian Schoeneman has a good, highly-detailed analysis here.

The Governor actually signed the budget over the weekend instead of waiting to do so based on the outcome of the veto session. This means that, absent any irregularities, the budget becomes final this evening.  Stay tuned for The Bull Elephant’s continuous coverage of these important events.

Can we impeach him?

McAuliffe wants to be a B.O. protégé in his efforts to expand Medicaid (OBAMACARE) but what he is overlooking is that people are on to him and B.O.
And the fact that when B.O. passed OBAMACARE he had a super majority and it still took criminal activity like bribes, parliamentary procedures, and other shenanigans to ram it through on Christmas Eve in the middle of the night.
MCAULIFFE’S Medicaid expansion wealth redistribution scam is DOOMED! Thank God.

[…] course, as we detailed this morning, even had the veto been sustained, McAuliffe (as he admitted himself) would have been left without […]

Gov. McAuliffe very likely is playing to the base but listening to him its easy to sense a real level of genuine personal frustration in his complete lack of ability to fully comprehend or work the legislative gears of the Virginia Commonwealth. For all his purported political experience he does after all have NO real executive or legislative credentials to bring to his current role. I have often wondered exactly what he thought he was capable of accomplishing as the chief executive in a state government that appears very alien to him.
Given the one term rule of the governorship. I find it difficult to accept he will even have enough time for any meaningful on-the -job training to become more effective in enacting his proposed progressive agenda. As for Bill Howell, he is a prime example of a state legislator that knows EXACTLY how the gears and mechanisms of state government operate and to that end has taken our frustrated governor to school. McAuliffe and his supporters are in for some unhappy times.

Which vetoes will the House actually consider?

I hear they will consider the veto of funding for new judges, and likely vote to override it.

As it turns out, the Speaker ruled the judicial funding veto, along with the veto of the Stanley Amendment, was out of order. The veto of the ethics funding was overridden, getting sent to the Senate to consider. Everything else was sustained (i.e., the vetoes were allowed to stick). More here: http://thebullelephant.com/general-assembly-veto-session-live-coverage/