The fireworks began on Friday afternoon.  Before the start of the convention the Haley campaign was passing out signs printed with the names of Trump and Cruz on them, with “Yes” on one side and “No” on the other.  These signs are used during conventions to inform supporters how the campaign wants them to vote during parliamentary motions.  These signs were being held by Haley supporters in an attempt to convince delegates supporting Trump and Cruz to vote the way the Haley campaign wanted them to.  The problem was that these signs were not authorized by either the Trump or Cruz campaigns.  Representatives from both the Trump and Cruz campaigns took to the stage to state that these signs were not authorized and were illegal, and called for them all to be turned in.

When the convention was called to order, the Haley campaign made a number of challenges to the rules, as well as trying to get a supporter elected as Chairman of the convention.  All of these efforts failed.  Three specific convention rules were challenged that mainly had to do with the National Delegate race.  One of the rules had to do with the list of candidates presented by the Nominations Committee.  All challenges to the rules were defeated except for a minor amendment calling for the candidates for national delegate to be listed along with the Presidential candidate they would support on a 2nd ballot in Cleveland.

During this debate, however, the Haley campaign forgot to challenge the specific rule that kept withdrawn candidates from having their names included on the ballot, and that rule was adopted by the convention.  When they realized their mistake they tried to reconsider the rules, but that motion was defeated.  The only avenue left for Vince to get on the ballot at that point would be if two-thirds of the convention delegates on Saturday voted to allow his nomination to be made from the floor.

With the debate over the rules finished and the rules finally adopted the convention recessed until Saturday, and delegates headed out to hospitality suites and receptions.

On Saturday the convention was called to order around 11:00 AM.  There were numerous speeches given by candidates for statewide office next year as well as some videos attacking Hillary Clinton to keep the early arriving delegates occupied so that people driving from farther out would have the chance to arrive before any voting for candidates took place.  Voting was scheduled not to start before 1:30 PM.

At this point the Haley campaign decided against making the attempt to nominate Vince from the floor, and John Whitbeck was re-elected as RPV Chairman without a challenge.

Next came the speeches. 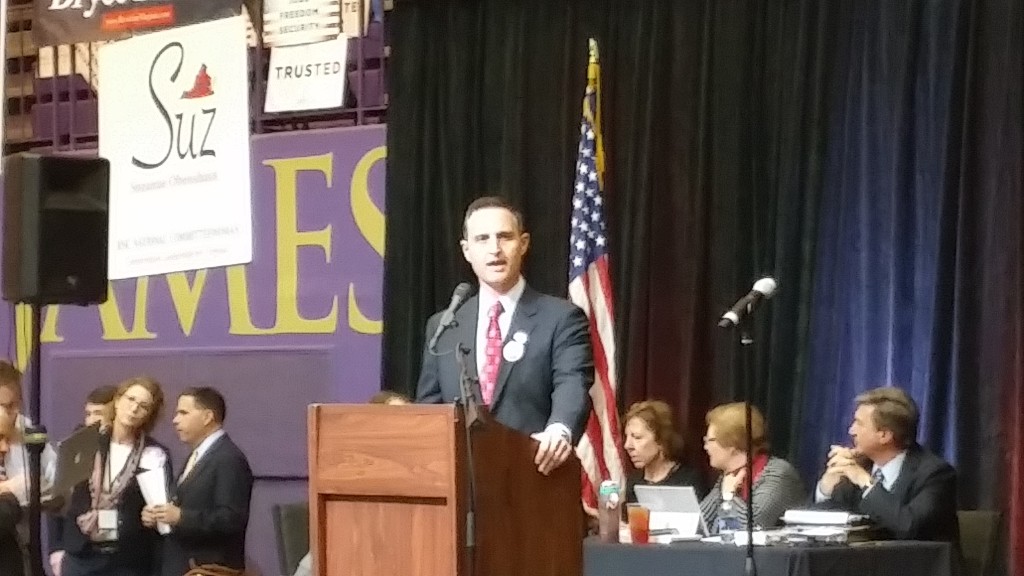 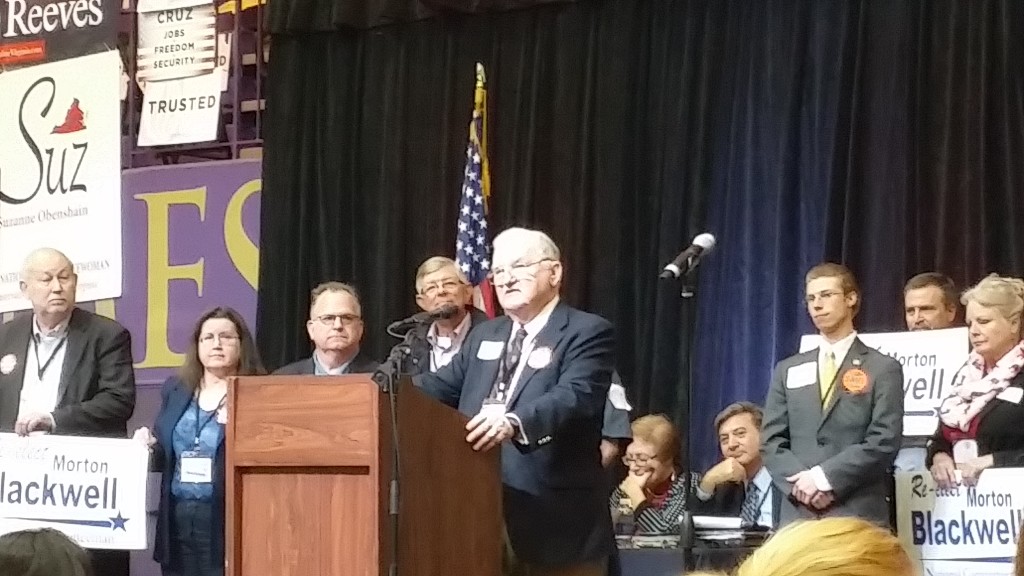 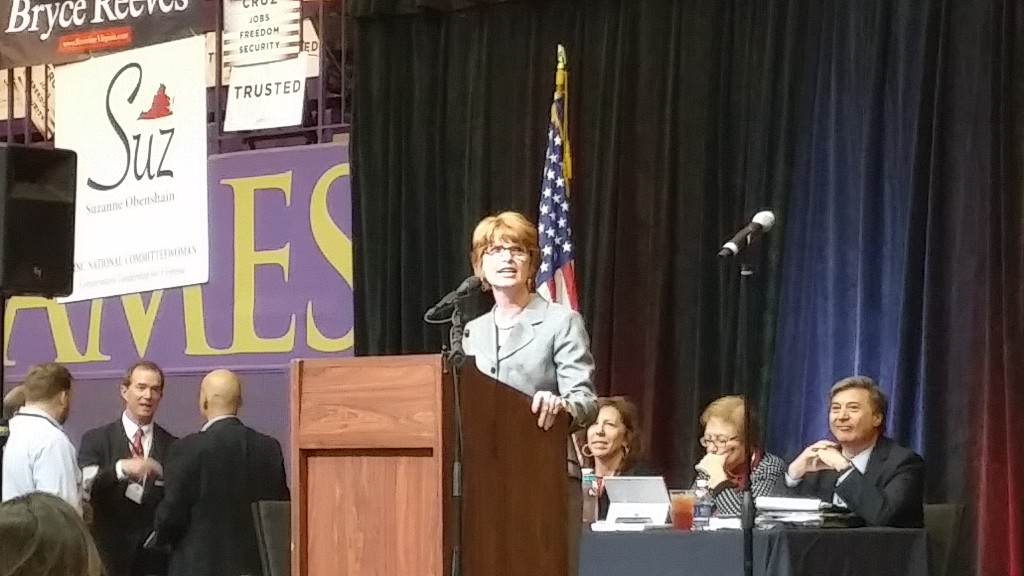 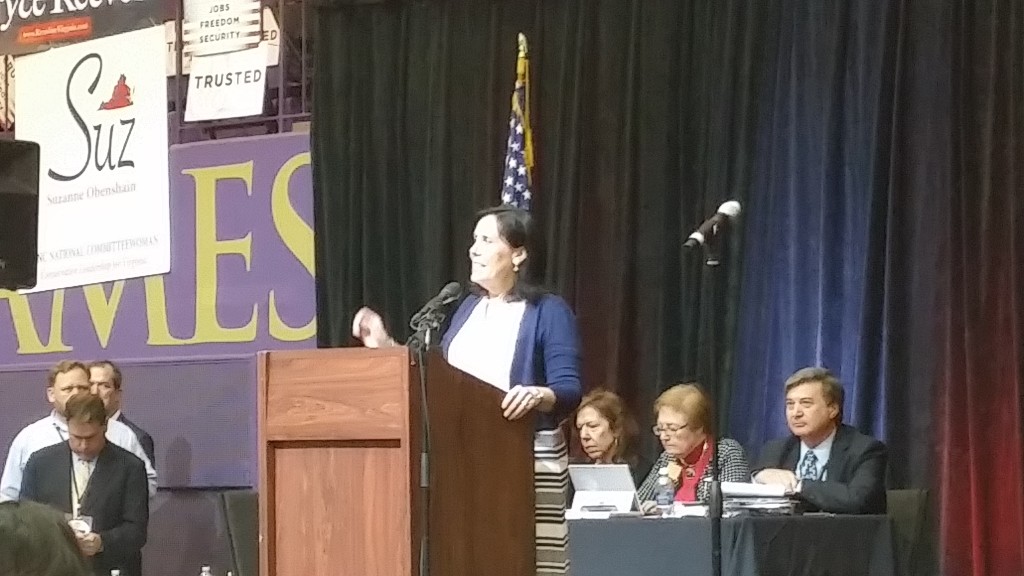 Nobody spoke on behalf of Michael Nelson, and I missed getting a picture of Audrey Dutton, who didn’t actively campaign but gave a good speech that was well received.

While the balloting was taking place for National Committeeman and National Committeewoman, the Trump and Cruz campaigns were busy working with the Convention Committee to work out a satisfactory way to count the votes for the slate of National Delegates.  The Cruz campaign was supporting the slate produced by the Nominations Committee, while the Trump campaign was preparing a slate of their own.  If the slate proposed by the Nominations Committee was defeated, the floor would be open for competing slates of delegates to be nominated.

At this point the results were coming in for National Committeeman and National Committeewoman.  Morton Blackwell was easily re-elected, but then something unexpected happened.  The results for National Committeewoman were announced and Cynthia Dunbar held a slim, 0.3% lead, however, Audrey Dutton took enough votes that nobody had a majority (at least 50% of the vote).  This meant that there would have to be a second round of voting and officials scrambled to prepare a new ballot.  Audrey Dutton graciously withdrew from the race to ensure that this second ballot would produce a winner.

While the counting for the second ballot was going on, the voting for the at-large National Delegate slate began.  After a voice vote and a standing vote were inconclusive, the decision was made to have each unit perform a standing vote count of yeas and nays, then the Convention Secretary called the roll and each unit chairman approached the microphone and announced the results of their County or City.  It reminded me of the National Conventions where they call the roll of the states.  Cheers would go up in different parts of the room depending on how each unit voted.

After the roll call vote was complete, the votes were tallied and the slate was approved with 53% of the vote.  Soon after these results were announced, the final tally in the National Committeewoman race were announced and Cynthia Dunbar edged out Suzanne Obenshain by a mere 100 weighted votes.