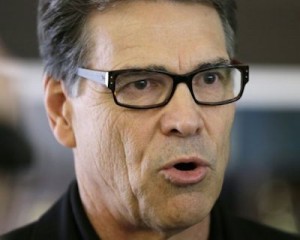 HAIL YEA SEND THEM IMGRANTS BACK WERE THEYE CAME FROM

is the point of this article about Rick Perry sending in the Guard or whether Cuccinelli thinks it is OK?

I think Alexis Rose Bank got into this article too.

It’s hitting a Virginia angle to a national story.

Why bring up reimbursement at all right now, in the long term the less who attempt to run the border, the cheaper it will be for Texas overall.

Exactly what is the National Guard going to do once they’re at the border?

Gee, let’s think about it…does a cop walking a beat in a dangerous neighborhood serve any function as opposed to the same cop sitting in an office/home in a nice peaceful neighborhood?

Not if the cop is only allowed to yell “STOP! or I’ll yell STOP! again”.

Do you usually continue to run when a cop yells at you to stop?

Not if it’s a real cop. But I’ll blow right past a Walmart greeter without stopping.

Well, if he sends even ONE illegal back to where they came from it will be more than either Party has done in over 30 years! Put a bounty out on the employers who hire illegals. There are now so many employers with illegals working for them that a bounty would put people to work collecting the bounty, that it would lower unemployment.

Doesn’t this Perry guy resemble Clarke Kent? Is he now going to turn into Superman in the fight against illegal immigration? Or, is this all “show” for “dough” for another run at “The Big House”?

These days just where will Rick Perry find a phone booth to change into Superman? Will the Bull Elephants own Jamie Radkte become Rick Perry’s Lois Lane? Stay tuned!

Deporting “ONE” illegal is “more than either Party has done in over 30 years”?? Um, no. Try this little nugget: “Total deportations in 2011, the latest year for which complete numbers
are available, numbered 715,495 – the lowest level since 1973. The
highest number of deportations on record was in 2000, under the Clinton
administration, when 1,864,343 aliens were deported.” http://cis.org/ICE-Illegal-Immigrant-Deportations

Deter and detect. Their very presence has a chilling effect on the attempts to cross. And when a crossing happens, they’re extra eyes and ears for the Border Patrol.

That “chilling effect” won’t last very long once it’s discovered that they have no enforcement powers and aren’t allowed to engage intruders.

It’s all a big show like the National Guard soldiers in airports after 9/11 with their unloaded rifles and no ammunition.

the point of the “show” is to induce Obama to do something. If the country thinks Rick Perry is trying to protect Texas, then the avg person might start squalling for Obama to quit begging for money, & instead try to get some of these youngsters sent back to their homes.

Well I think the real question is why the House does not introduce and pass Legislation to repeal the law that Bush 43′ signed that guarantee’s every one of these illegals from S. Amer. a hearing before deportation?

If Obama tries to change the law by executive order, then John Boehner will sue him. It’s a no-win for Obama. If the Republicans pass legislation to repeal the law, and send it to the Senate, then they can blame it on the Democrats or the president.

So, just why is it the Republicans won’t pass legislation to repeal the law that guarantees each one of these kids a hearing? Could it be the American corporation doesn’t want to lose the cheap labor?

here’s the argument against that: these youngsters, to the extent they become citizens & vote, will vote Democrat. So the Republicans don’t want an influx of them for that reason.

I don’t necessarily think they’re not allowed to engage ALL intruders…I imagine they’ll get to show their teeth to the cartel types if given the opportunity. But Kelley is right about the other value being the light it helps shine on the inadequacy of the federal response.

Finally, a Republican that is using the tools that the Founders gave us to protect ourselves from the Left. It’s so sad that Cuccinelli is saying this from wherever he is instead of the Governor’s Mansion. Time is slipping away from us. We have precious little of it left to save our state and our country and restore it to it’s former glory.