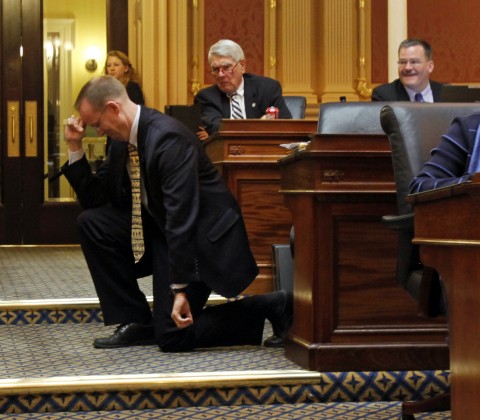 Governor McAuliffe vetoes the Tebow Bill for the third time

Once again Governor McAuliffe has vetoed the Tebow bill, introduced by Delegate Rob Bell, that would have allowed homeschooled students to play in public school sports.  Does the Governor not realize homeschoolers save the taxpayers money because the schools do not have to educate those children but their parents pay the same taxes as the rest of us? Why shouldn’t their children at least be able to play sports with the other children in their towns?  It’s disgraceful that the Governor continues to support the educrats over Virginia’s children.  Just one more reason why we must elect a Republican Governor this year. More on the story here.

804Hokie has a point. It was better when we had our own sleaze, McDonnell.

Our “sleaze” was acquitted UNANIMOUSLY be the Supreme Court because your sleaze orchestrated a political hit against a potential political rival of the high priestess of corruption, Hillary Clinton, who is the biggest sleaze U.S. politics has ever known.
In 2 years, your sleaze will be rotting in jail.

Let’s make sure this sleaze isn’t succeeded by another dem.