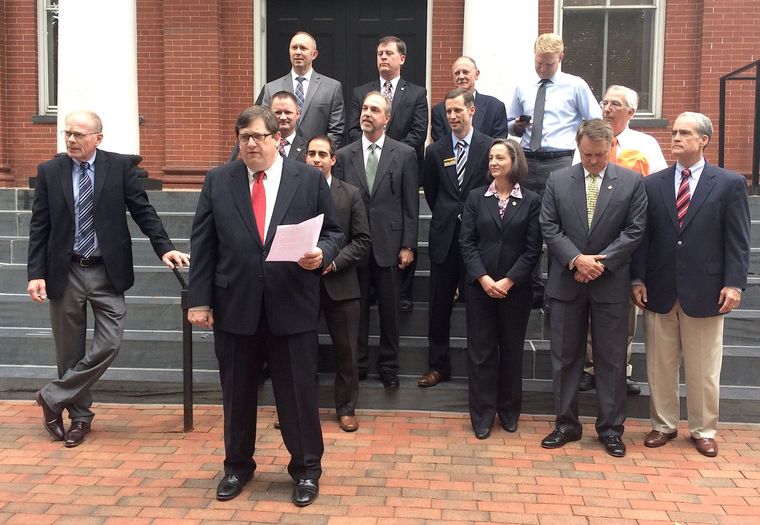 On Friday a group of Loudoun County Republicans, including LCRC chairman Mike Haynes, elected officials, and new candidates, held a press conference to stand strongly for party unity, criticizing two former Republicans for running against Republican candidates. Former Sheriff Steve Simpson is running against our current sheriff Mike Chapman, and current Chairman of the Board Scott York is again running for his seat, this time as an Independent. [read_more]

Republican candidate for Chairman, Charlie King, read an impassioned speech against those former Republicans who are challenging our nominated candidates. Every Loudoun voter should read it.

REPUBLICAN CANDIDATE
FOR CHAIRMAN OF THE BOARD OF SUPERVISORS
JUNE 5, 2015

Iâ€™m pleased to join my countywide Republican nominees and others today to highlight the strength and unity of our Republican ticket as we approach a critical election to determine Loudoun Countyâ€™s future.

The Chairmanâ€™s word must be his bond. If Mr. York will lie to a newspaper to win an award, how can we trust him to be truthful on more important issues?

For a police officer, reputation for telling the truth is everything. Based on an officerâ€™s word, people will be convicted of crimes and sent to jail. How can Steve Simpson possibly lead the Loudoun County Sheriffâ€™s Office when he cannot honor simple promises to play by the rules.
Loudoun County needs a decisive leader. If Mr. York takes months to make a decision while reversing himself over and over, why should the voters believe he is capable of making the many tough calls the next Board will have to make?

Is Mr. Yorkâ€™s waffling the actions of a man fully committed to Loudoun County? The answer to that question is â€œno.â€

As his reason for running, Mr. York contends none of the other candidates are â€œqualified.â€
Really?

Mr. Yorkâ€™s view is that only a career politician is fit to be Chairman.

Mr. York believes he is indispensable. When a politician starts thinking this way, that he is irreplaceable, is the exact time for the voters to start looking for somebody else.
Iâ€™m running for Chairman of the Board of Supervisors because change at the top is long overdue. The events of last week should make this fact obvious to everyone.

For Republicans to win in 2015, we must all be united. We are stronger together.
The results of the 2015 election in Loudoun County will reverberate beyond our countyâ€™s borders into the rest of the Commonwealth and beyond. 2015 is really about 2016. And in 2016, once again Loudoun County will be political ground zero in America. To win in 2016, we must have a strong team of Republicans in place.

We Republicans have an outstanding ticket of talented, hard-working and honest candidates. I look forward to running with all of you to make our case to the voters.

Itâ€™s time to turn the page and look to the future. Itâ€™s time for new leadership and a new vision for Loudoun County that will make it an even better place to live, work and raise a family.

Reply
BlueRidgeForum » Common Sense: Loudoun County GOP Unity? We Hear You. But How About Real Accountability in Times of Peril? June 8, 2015 at 10:16 am

[…] King, said, “Itâ€™s time for new leadership and a new vision for Loudoun County.” [The Bull Elephant has the full text of King’s […]

I have been told by some that James City County basically told Leo Rogers to take the job with Loudoun County instead of being fired. It is baffling how our board would have thought he was a good choice. So much for integrity.

I hope the Republicans will not stand for party unity when the current board hired the County Attorney with his domestic abuse charge following him to Loudoun. Now, Leo Rogers is a personally named defendant in a 75 million dollar RICO suit. This board of “unity” refuses to call out Shawn Williams for his domestic abuse charges. Nothing about really bad judgment by this Republican board deserves unity. I am hopeful Charlie King has far better integrity than to seek unity with such a bunch.

When Charlie speaks remember you are hearing the words of Eugene Delgaudio.

Absurd. I know democrats love to say that but it simply is not true. King was Eugene’s lawyer, not the other way around.

This has to be the weakest show of Republican “unity” I’ve ever seen on those courthouse steps. Looks like only half the pack. Notice the body language on the ones that are present. Chapman is not looking, one guy is five steps to the left and the rest (aside from Genie babe) are either looking down or away. Charlie must be a real inspirational speaker.

Once again we have politicians lecturing people on how pledges and promises mean something and if you break those promises then your ethics and moral standing is destroyed. Wow! Talk about dripping with hypocrisy coming from politicians these days.

We understand unity with party and how that works with funding etc.. but save us from the self righteousness of politicians in general. People are smarter than that and it is rather insulting for some to listen or read these comments. I agree with Mr. King on the point about when politicians think they are too important to step aside. Yes, that is troubling and lends itself into other difficulties that politicians have with those who are moderate or independents.

I see this differently and it seems like the message is; independents and independent voters be damned. Maybe that is why there is such a struggle nationally with one party?

In my opinion Public Safety is too important to stand by and not welcome qualified people to engage in debate. Considering what has been going on and how there is a real split on strategies to improve our efforts in this arena, I say stop the hypocritical moral attack and leave it to actual subject matter and ideas that are attacked. I think there are many reasonable minded republicans (and maybe democrats) who agree.

When Charlie speaks it is wise to listen.