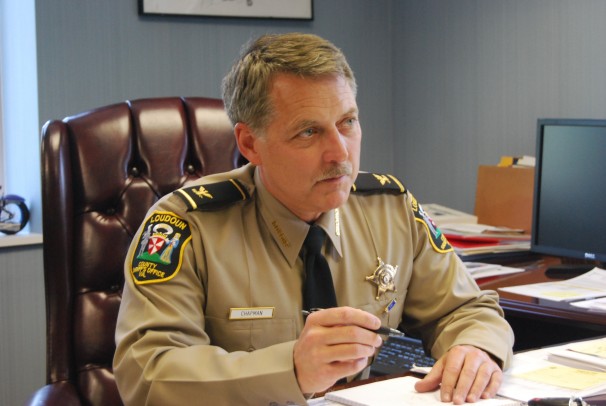 Loudoun County Sheriff Mike Chapman has begun firing some of his top deputies, including some who he brought to Loudoun 4 years ago to work in his administration. It is his feeling that if any of his deputies supported, or voted for, his opponents in the past election they should be dismissed.  It is rumored that even Chapman’s senior assistant deputy, Chapman’s right hand man, will not be sworn in again. (I never saw any evidence of this deputy supporting anyone other than Sheriff Chapman.)

Since Loudoun doesn’t have a police force, only a sheriff’s office, Chapman can fire any deputy for any reason.  Former candidate for Chairman of the Board, Charlie King, addresses the problem here.   In September King said,

“Subjecting professional law enforcement officers to political turmoil every four years, and the uncertainty as to whether their careers may come to an end when the sheriff begins a new term, is unfair to those who risk their lives to save ours,” King said in a prepared statement in September. “With a police department, these officers would be afforded the same protections as all county employees.”

Sheriff Chapman’s actions will cost Loudoun county plenty for all the new hires and their training.  Much institutional knowledge will also be lost.

When Chapman fired Deputy Eric Noble without cause, many saw the true Mike Chapman revealed.  We tried to warn citizens. Chapman won the Republican convention by a mere 6 votes, making it obvious that many people knew the real Mike Chapman.

I expect much more to be revealed on this story in the coming weeks so stay tuned. Chapman has only just begun.
More on the story here and here.
Loudoun Sheriff Firing Long Term Deputies was last modified: December 17th, 2015 by Jeanine Martin

Until the county updates its form of county government, switching to a police department (with a chief an at-will employee of whoever happens to be on the BoS? THAT’LL get the politics out! rotfl) is premature.
Although I do see your point: a good round of “toldja so” will SURELY make people do exactly what you say at the ballot box next time. I mean, It’s worked for several years now, so why not continue?

Yes, a police force will take politics out of it for the regular police on the street. They will have all the protections that other county employees receive. The head honcho cannot fire them at will. The only political position will be the head of the force who will be appointed by the BOS but he will not have the power to fire at will. But of course you knew that.
Who said I care what people do at the ballot box next time? Chapman won’t be running for sheriff. He’ll be movin’ on up to Governor. Or so he says.
Yes, I toldja so is the silver lining in this mess, and darn fun! Of course you would know that too since you do it all the time.

you’ve sidestepped the issue, as usual. We have outgrown the traditional form–we had, in fact, before you moved in to swell the ranks of the explosive growth that pushed us past the functionality of the system we still use–and until we address that we should not adopt the police model.
Loudoun has enough laws on the state books that ONLY apply to Loudoun–you should look that up too sometime–and we don’t need any more of them in the form of jerryrigged things that only work THIS way HERE because we’re so special. As you also know (or may prefer not to acknowledge) Loudoun also suffers from some animals very firmly believing they are more equal than others.
The traditional form of government handed down in 1868 is one form of historic preservation that does not provide much in the way of a benefit.

What an archaic administration Chapman has created … and it all revolves around him. It’s not about, as he states, what’s in the best interest of the agency, it’s what he believes is in HIS best interest. He’s easily threatened by anyone who has an opposing view and he’ll do whatever it takes to keep them quiet – too include getting rid of them. He continues to surround himself with yes-men and, as anyone who knows anything about leadership will tell you, that is a recipe for disaster. Look at ANY true leader and you’ll see that each has intentionally had folks who played the role of devil’s advocate close at hand. It’s necessary to be successful.

And, don’t let him fool you by saying it’s a personnel matter and not open for discussion. This was 100% politically motivated. If it was a personnel matter then the proper methodology would have been to administer progressive discipline per his own (and the County’s) human resources policies. Each of the deputies who were released have stellar performance records and were dedicated to the agency and the citizens of Loudoun County. Alas, Chapman’s absolute lack of any sense of leadership has caused him to use a political process to remove otherwise successful deputies.

Shame on you Mr. Chapman … show some courage and do the right thing. Do you have any idea … ANY IDEA … what such actions have done to the morale of your agency? Every single deputy is now shaking in his/her boots. From this point forth you’ll never get an honest answer from any of your deputies as they will always, ALWAYS, tell you what they think you want to hear.

So glad I’m outta there, having retired early in Chapman’s first term … I saw clear warning signs a mere thirty days into his first term and watched things spiral out of control over the ensuing months and wanted no part of it. Crying shame what has happened to the LCSO with Chapman driving the bus …

It’s terrible that Loudoun’s only law enforcement agency is based completely on politics and not on competence. Our deputy sheriffs work so hard. Their continued employment should not be political, at the whim of the sheriff. They deserve more protection than that. Charlie King is right, we need a police force where our police officers would be treated like every other county employee and could not be fired simply at the whim of their leader. We must find a way to protect our law enforcement officers and their families. In the long run, if we can’t protect them, the county will pay far more.

Charlie King could give a rat’s a$$ about county employees and deputies. He only talks to court and court staff and police, if he needs something from them. He is loser’s loser trying desperately to stay relevant having lost yet another bid office.

Please list ALL the offices Charlie has run for. ONE office. He lost because Scott York couldn’t stay out of the race. York through the race to a Democrat. Thanks Scott!

Oh silly me, I thought we were talking about Loudoun county.

No problem. I think he lost another in another jurisdiction as well. I guess that’s the M.O. Keep moving until you find some place to elect you. Kind of like carpet bagging, hey?

No, he didn’t. He’s lived in Loudoun for 20 years and run for ONE office.

Jeanine….I’ve lived in LoCo all my life, even longer than you. Born here, raised here. I’ve also served in county government and had the displeasure of dealing with Charlie. He is unelectable, unorganized and lacks the gravitas necessary to hold office. You all should have considered that before propping him up. I’ve seen him sleeping at BOS meetings as he was trying to figure out what was going on. There are photos of his notorious naps…..ask around, they’re out there. Shoot…..ask Sleepy himself, he’ll tell you. So, let the record reflect at least two failed runs.

Please stick with one phony nic, least you end up arguing with yourself. Thank you.

I’ll withhold judgement until we hear the who and why but personally insubordination does not make for a cohesive department if that’s what this is. The sophomoric antics of Noble as a good example.