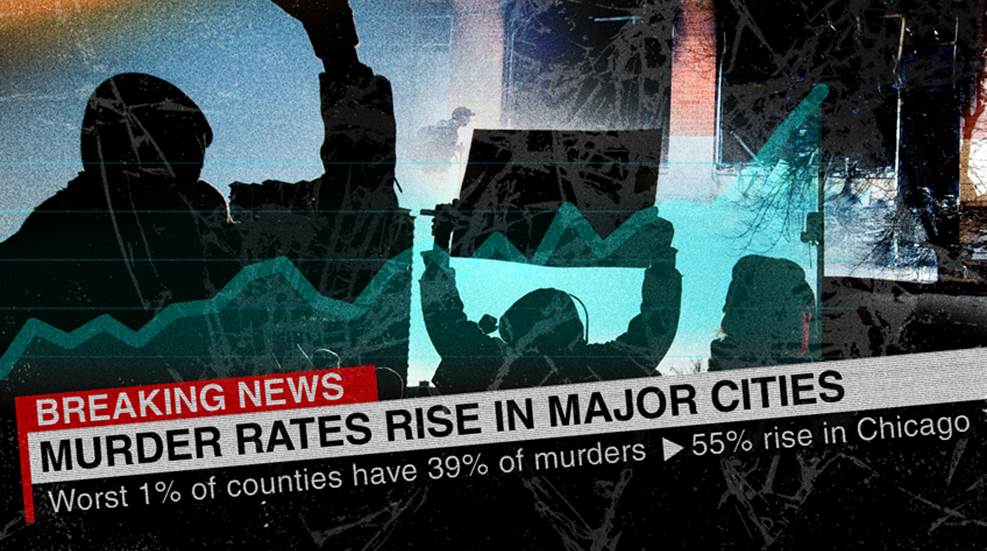 Baltimore’s homicide rate has risen since 2014. Over 200 people have been killed in Baltimore in just the first seven months of this year, about as many as died in all of the year 2014, even though Baltimore’s population has shrunk a lot since 2014.

Murders have risen there because prosecutors haven’t been seeking long sentences for people who commit serious crimes. As a result, criminals are soon back on the street, where many of them go on to murder innocent people. Most murders in Baltimore are committed by people who previously were convicted of a serious crime, but didn’t serve a lengthy sentence for that crime.

Maryland Public Policy Institute researcher Sean Kennedy, who studied 110 homicide cases arising from January 2019 to July 2020, found that suspects in 77 of these had been previously convicted of a serious crime by Mosby’s office. Sixty-one of them (79 percent) faced statutory jail terms that should have kept them in prison beyond the date on which they allegedly committed the homicide.

If these criminals had been kept in jail longer, that would have kept them from killing anyone.

Unnecessary killings are also occurring in Virginia, in places where progressive prosecutors now refuse to seek longer sentences. Criminals have repeatedly killed people after being quickly released in Fairfax County due to the lenient sentences sought by left-wing commonwealth’s attorney Steve Descano.

This March, a man was charged with two killing homeless men in Washington, DC, after he was released from jail in Fairfax County after serving “just a few months.” Fairfax County prosecutors dropped felony charges against the man over a violent assault he committed on a woman, resulting in him only being convicted of a misdemeanor. As NBC notes, “Gerald Brevard III already had a long criminal record that stretched across the D.C. area before he was arrested this week and accused of shooting five men who were homeless, two fatally.” Descano had told prosecutors to seek only misdemeanor charges for many act that constitute felonies under state law.

The Free Beacon reports that “Two months before, another gunman, whom Descano had pleaded out on misdemeanors in 2020, killed an 18-year-old at a bus stop.” And in October, Descano allowed a violent criminal to be released on recognizance, “slapping him with just a $212 fine and one-year period of supervised probation. Police on Monday arrested Jones for beating 63-year-old Michelle Huntley to death at a bus stop where she had taken shelter.”

Descano also refuses to seek mandatory minimum sentences.Maryland and Virginia are alike in many ways. But Maryland has shorter sentences for criminals than Virginia. It also has a violent crime rate more than double Virginia’s. In 2018, Maryland had a violent crime rate of 468.7 per 100,000 people, according to USA Today, compared to a violent crime rate of only 200 per 100,000 in Virginia. As ABC’s channel 7 has noted “the Maryland Judiciary is, generally speaking, more lenient on criminal defendants” and “Virginia has stricter laws on the books” and “harsh sentences,” which are “a huge deterrent” to crime, according to law enforcement sources, who said, “Criminals know if you commit crime in Virginia you might get whacked, while in Maryland, you might just get slapped on the wrist.”

While this does not rise to the level of murder, it is still criminal activity.

Far-right Delegate Dave LaRock of Loudoun County, has been harassing a neighbor for at least four years. The harassment includes trespassing and destroying the neighbor’s property. A judge ordered LaRock to cease and desist. Meanwhile, turns out, the Loudoun County Sheriff sent a message to his deputies to ignore all calls from the neighbor reporting harassment and trespassing by LaRock.

If LaRock were to mow the lawn along his property boundary and cut 1/2 inch over the border you would accuse him of stealing his neighbor’s grass. Maybe deputies ignore the neighbor because the neighbor is a little cuckoo? Maybe? Are you? Why do you mention LaRock while ignoring murders? Are you an insane or just a stupid Democrat?

Sanctuary cities and states encourage illegals and crime.
They created their own problems, but yet they blame and complain to others for their troubles.
It’s their ideology that stinks. The only place this works is in the college classroom and in the
hallucinogenic fog of a dorm room.

And at DNC meetings. This is what happens after chooming (like Obama) and taking hallucinogens.

when democrat run hellhole cities start losing businesses and working people because they are unlivable, there might be a change that favors work over welfare, law over illegality and decency over perversion. However, as it stands, just walking down the street is risky even when armed.