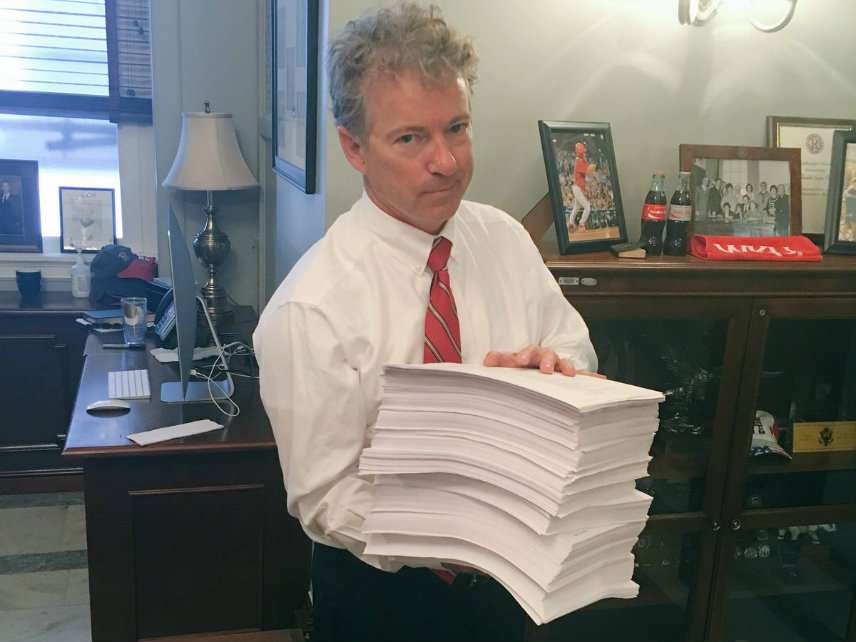 Members of Congress will soon be asked to vote on a massive omnibus government spending bill over 2,700 pages long.  See Rules Committee Print 117-35 Text of the House Amendment to the Senate Amendment to H.R. 2471 (March 8, 2022) here.

Based on past experience, it is likely that the Representatives will be asked to vote on that massive bill without hearings, without being given a reasonable amount of time to read and understand the proposed legislation, and without any meaningful debate and deliberation on the bill.

Emergencies can leave people with little time to analyze and discuss how to respond to the situation.  Emergencies often require prompt, decisive action.  But emergencies do not justify precipitous, unthinking leaps into the dark.  Emergencies do not justify or excuse our elected representatives acting like stampeding cattle that have been spooked.  Moreover, proclaiming the existence of an “emergency” after prolonged Congressional inaction and delay and then insisting on precipitous action by our Representatives is particularly unjustified and obnoxious.

It makes a mockery of representative democracy if our Representatives act as passive rubber stamps for political deals made by a small handful of people without any transparency.  And, it encourages the cynical and manipulative use of “emergency” legislation to obscure and camouflage policies, practices, and spending that would be unlikely to be enacted into law if considered on their own merits.

Such a practice is wrong and contrary to the basic principles of representative democracy.  There is no excuse or justification for giving our Representatives and the American people “the bum’s rush” instead of a meaningful opportunity to know what exactly is contained in proposed legislation.  “Hurry up, hurry up, don’t read the document, just trust me and sign it” may be appropriate for a confidence man, a huckster, or a shady business person; it is not appropriate for our Representatives.  And, it is an insult to Americans and their right to have a meaningful representative democracy.

The routine requirement to enact federal appropriations legislation does not justify passage of proposed legislation offered without a meaningful opportunity for Americans and their Representatives to know and understand what is being proposed.  Congressional inaction and failure to carry out its budgetary responsibilities in a timely manner are not legitimate excuses or justifications for applying “the bum’s rush” to the legislative process.

Passing last minute, massive omnibus legislation is not a solution to Congress’s dysfunction.  It is a glaring symptom of Congress’s institutional failure to carry out its responsibilities in a reasonable, orderly, and timely manner.  It is antithetical to, and destructive of, meaningful representative democracy.

It is not an accomplishment for a Representative to vote to pass massive legislation without hearings, without a meaningful opportunity to read and understand what is being voted on, and without a meaningful opportunity to deliberate and debate the merits of proposed legislation.  Rather, it is a clear indication that a Representative is failing to adequately represent his or her constituents, and is failing to carry out his or her Congressional responsibilities in a reasonable manner.

The upcoming midterm elections will provide Americans with the opportunity to show their displeasure with dysfunctional, ineffective Representatives.  If Americans fail to hold accountable those Representatives who acquiesce voting for last minute massive legislation without adequate deliberation, then Americans will continue to suffer the negative consequences of such an outrageous legislative practice in the future.

The entire system needs to be itemized, so that you vote on a single law at a time that way you can’t hide the crap from being on your hands when you vote!

Same goes for regulations that carry a fine or jail penalty they need to be passed by Congress to control the stupid.

Congress has been hiding or giving away responsibility for 100’s of years!

In all honesty does it really matter if the Congress clowns read the bill? As Piglosi once said:
We have to pass the bill to know what’s in it!
The K Street Lobbyists, Deep State organs, Wall St Financiers, Billionaires in the Tech world, MIC Etc know what they wrote. No need for Bernie, AOC, the Squad, or the RINO gang (Cuckservatives) to worry their little heads about it… they’ll get their payoffs to their campaigns and personal fortunes and that’s all that matters.
How’s Liz Cheney doing in uncovering the conspiracy about the January 6 events!!!! They’d better waterboard some of the terrorists they have in those DC jails to get to the bottom of the danger!!!!

Pelosi wasn’t lying when she said “we have to pass it to know what is in it”. Why is that? Because the K St. lobbyists and health care industry wrote the Obamacare bill. Pelosi, she don’t know shit about health insurance or health care. She is however an expert on how to become a millionaires as a member of congress to the tune of hundreds of millions of dollars for herself. Most likely K St. wrote the Omnibus bill too. Members of congress mostly hire campaign staff and family friends to man their congressional office until the next election when they then switch back to campaign mode. They will also hire former lobbyists who know how to suck PAC and campaign money out of companies such as big oil and defense contractors. You do understand PAC money is theirs to keep don’t you? And make you should check to see if they have to pay taxes on their PAC and campaign loot.

Being a member of congress is about one thing, making as many millions as possible from the American people. Members of congress generally do not know shit about shit, and rely on the lobby to “guide” them to personal profitability.

Keep this in mind also. The other blog. They banned me because I pointed out the money their lobbyist writer’s employer was giving to certain members of congress. And asked just what they expected for their loot. This caused him to phase out his leadership role in that blog. Poof, he was gone from the blog. And, I questioned another writer about his use of illegal immigrants in his business. Poof I was gone. And, I questioned just what the blog owner did to support his family. They did not want the truth to be known, so they banned me for telling the world how they played the game. Nothing illegal as far as I know. But, when Eric Cantor got the boot, their source of DC loot dried up also.