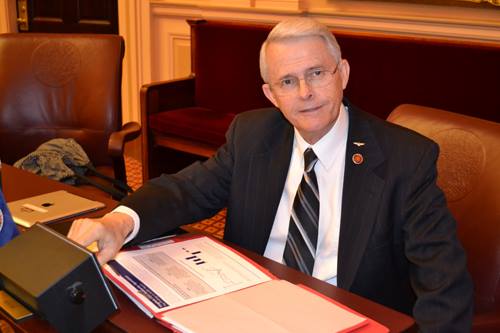 Senator Black’s comment today regarding the following statement “while written two years ago, this statement still reflects my views. Â Under no circumstances will I vote to change the law that protects war monuments, including Confederate ones.”

Mob hysteria has swept our nation, targeting historic Civil War symbols and monuments. Â A Virginia group is attempting to rename the Jefferson Davis Highway; another would remove the 1908 Confederate War Memorial from the Leesburg Courthouse.

Tearing down flags and statues wonâ€™t satisfy vengeful people. Â Already, many Republicans on Congress support a mean-spirited attack to deny familiesâ€™ rights to put little battle flags at their ancestorsâ€™ graves on Memorial Day. Â A self-styled â€œslave historianâ€ claims the fleur de lis symbol of the New Orleans Saints is â€œracist,â€ and a federal judge said the same thing about the Redskins football team. Â There is no end to this silliness.

Erasing Civil War history isnâ€™t enough. Â They want to rename the nationâ€™s capital, citing George Washingtonâ€™s association with slavery. Â The Thomas Jefferson Memorial is under attack too. Â Memphis, Tennessee, passed a macabre plan to unearth corpses of a Confederate general and his wife. Â This business is simply disgusting. Â It denies our nationâ€™s heritage and attacks freedom of belief and expression.

Iâ€™m astonished by the emerging divisions afflicting our nation. Â These actions incite hatred where none existed before. Americaâ€™s traditional respect for the fallen is being replaced by a nasty bitterness, which is unbecoming of our great nation.

Iâ€™ve seldom seen a more racially poisoned atmosphere in this country. It is time to reunite our nation and reject the demagogues inflaming hatred toward the history of this land. Â I urge others to join me in ending this divisiveness in America. Â We are better than this.

[Note: Â Senator Dick Black (R-13) represents Loudoun and Prince William Counties. Â He served 8 years in the House and is now a prominent leader in the Virginia Senate. Â Â As a JAG Colonel in the Pentagon, he was Chief of the Criminal Law Division. Â He testified before Congress and advised the Armed Services Committees on issues of national significance. Â He prepared Executive Orders for the Presidentâ€™s signature. Â As a Marine, he flew 269 combat helicopter missions in Vietnam. Â During bitter ground combat with the 1st Marine Regiment, he was wounded and his radiomen were both killed. Black holds the Purple Heart, 3 Legions of Merit, 13 Air Medals and the Navy Commendation Medal with combat â€œVâ€ for valor.]

[…] a fake version of history. He tells us about Virginia State Senator Dick Black. “He hasÂ asserted that to remove them is an attempt to erase history, but recently, Black tried his own hand at […]