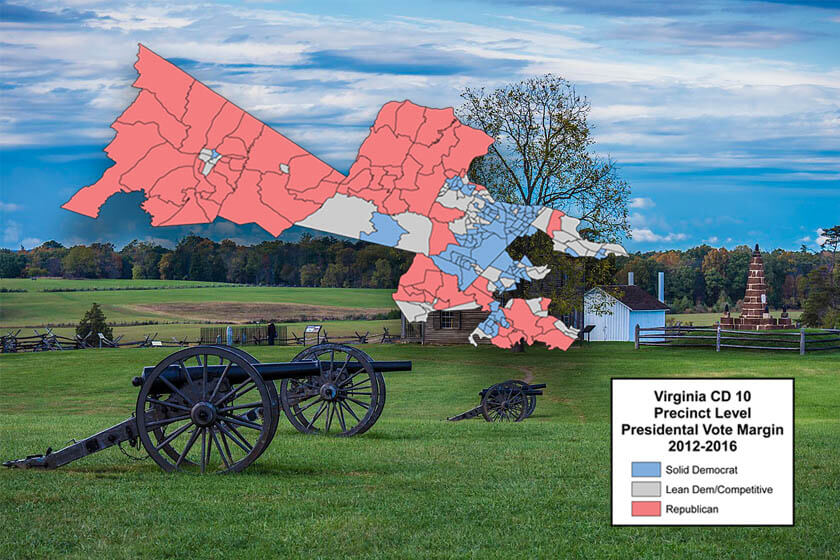 In a new Monmouth University poll, Democrat state senator Jennifer Wexton holds a 10 point lead over Republican Congresswoman Barbara Comstock.  Wexton’s support among Democrats is more than solid, 97 to 1.  Comstock’s support among Republicans is 85 to 10.

“This part of the commonwealth was a critical factor in the blue wave that elected Democrats in last year’s election for governor and state legislature.  Not much has changed in the political environment since then, with Pres. Trump creating a significant drag for Comstock,” said Patrick Murray, director of the independent Monmouth University Polling Institute.

Voters are divided on their opinion of Comstock – 32% have a favorable view and 36% have an unfavorable view of the incumbent, with 32% having no opinion. When they put aside issue stands, nearly half of the electorate (46%) says the two-term congresswoman has generally done a good job serving the needs of her constituents, while 30% say she has done a bad job. The challenger Wexton is not as well known – 30% have a favorable view of her and 10% have an unfavorable view, with 59% offering no opinion – but voters are inclined to think that she can capably serve the 10th district’s residents – 48% say she would do a good job and 17% say a bad job.

That makes little sense, most voters don’t know Wexton but they think she would do a good job. Does it only take a (D) after a candidates name for voters to believe the candidate will do a good job?

As expected Trump has a large influence on the 10th district election,

The incumbent’s reelection prospects are weighted down by voters’ negative views of Pres. Trump – 53% disapprove of the job he has done compared to 42% who approve. Importantly, those who strongly disapprove (47%) far outnumber those who strongly approve (24%).  Also, 70% of those who oppose the president’s actions say it is very important for them to cast a vote in the House race that shows their feelings about the president. A smaller number of those who support the president (58%) say the same about their House vote.  More VA-10 voters say Comstock has been too supportive of Trump (34%) than say she has either been not supportive enough (17%) or has offered the right amount of support (23%). Another 26% are not sure.

This is very early polling. No one should ever underestimate Congresswoman Comstock. There is no candidate who works harder than she does.  Don’t bet against her winning again in November.

Live in Comstock area. She stinks. She is hated by everybody i know.
She is a terrible congress-person.
As a 6X year old person that has vote GOP all my life I will never vote for her again
Wexton first worlds where like “I’ll have town hall meeting…”
The DNC understands there target

“Which political collective in the last
century would be identified by those ideas? Communism? Socialism?
Fascism? Pick one; it doesn’t matter because there is not a lot of
difference between the three. The common thread they all share is that
they are polar opposites of conservatism.”

The problem here is that the Republican Party has been a largely a ‘pick one — it doesn’t matter’ party for all of my lifetime. And the ones who call themselves ‘Conservatives’ get suckered in most of the time. However so stated, there are signs that something counter to Fake Politics As Usual is astir, at least in my District, which is The Fighting Sixth. This stirring appears to already have Jennifer Brown in a miff.

So Trump is a drag on Republican candidates like Comstock! And yet Trump got elected against all odds and still packs them wherever he appears? Something here does not quite match up. What might it be?

10th district is immigrant-heavy, to include Muslims

Trump was elected because Hillary was a terrible candidate.

He didn’t win in this district. He won nationally. Big difference.

Corey Stewart is ***not*** to blame for these numbers so don’t blame him in November.

Oh we’re going to blame him alright, for dragging Babs across the finish line!

It appears to me in all our national news that the words progressive and socialist are being associated more closely. No kidding! Can republicans actually make that connection in a better way when civics isn’t in our schools and people don’t really know what socialism means? Republicans have so much to work with, but are usually deficient in messaging.

Republicans need a national leader who can successfully articulate our principles, and not provide daily opportunities for ridicule. Trump is totally unable to do that. On trade, on immigration, on taxes, on the debt/deficit, etc.

They will constantly ridicule anyone, it’s in their rules. Trump is doing fine articulating our principles by action and deed — Please succinctly and effectively articulate our principles so that we may emulate this at local, state, and national levels.

The Republican Party doesn’t have any principles, that’s the problem.

Sure they have a platform and things they claim are their principles during the campaign but once elected they make little or no effort to pursue those things. And GOP voters definitely have principles but the party establishment has no interest in those things either.

As their actions have shown again and again, the GOP really just wants to be the “Diet Democrat” party. They want to do most of the same things as the Democrats, just a little bit less of it and over a longer period of time. As others have stated before: “Progressivism with a speed limit”.

Bingo! Republicans don’t really have an agenda counter to Marxist Globalism. They are all hat and no cattle as the Texans say when it comes to effectively launching an offensive against Globalist. With such ‘all hat’ Republicans continually being run, the Republican party perpetuates the Duopoly Party Fraud. A lot of us are sick of this, and many of us don’t bother going to the polls, that is … excepting the rare occasions when someone with real fight in them appears on the scene.

I can’t figure how so many people are so stupid as to not figure this out, and instead lay blame elsewhere, even if blame must be invented.

OK, you tell us what socialism means, and please be clear about whether or not you think we are living in socialism here and now in the average Virginia county.

So, maybe we should not pay attention to these polls and just talk to people and try to earn every vote.

And which party facilitated the rapid urbanization in Loudoun County?

Urbanization = growth, so, yes, tell us which party is anti-growth and anti-jobs.

Yeah, but most of the urbanization hasn’t even occurred yet. Ashburn and Sterling are still largely suburban. It will be about 10 years before the developments around the Silver Line (and their 35k+ new housing units) are fully built-out. That will likely put the 10th district out of reach for the GOP for the foreseeable future.

Unfortunately, you are right.

To your question, “Does it only take a (D) after a candidates name for voters to believe the candidate will do a good job?”… the answer is a resounding YES. Democrat voters are not deep thinkers.

we can say that, but what will we do about it? Republicans have opportunities that they miss or ignore, time and time again. Where is the RPV?

So tired of seeing the RPV used as a whipping boy. My responsibility is to support candidates with my TIME and MONEY, and to strengthen my local Republican unit.

Ask your SCC members, they should have a quarterly meeting this Saturday to establish and review the comprehensive winning plan for November… or maybe not pass some resolutions??

Isn’t the corporate line here to support the candidate no matter what?

Not here, but in the party.