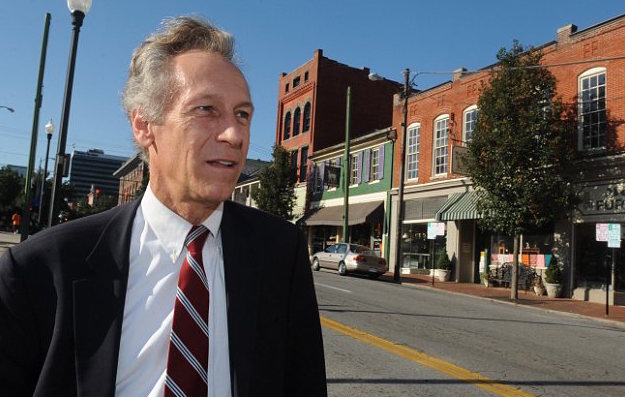 In an op/ed in the Roanoke Times, the iconoclastic fixture of southwest Virginia politics calls the new requirement a transparent effort to suppress Trump votes.

When State Sen. Virgil Goode was first elected to Congress representing Virginia’s 5th District in 1996, he did so as a Democrat.  Four years later, after four years of isolation within the Democrats’ caucus because of his conservative stances on gun rights and abortion, Goode won re-election as an independent.  At the time, he positioned himself as being “as independent as the people he serves.”

It was only in 2002 that Goode announced that he had joined the Republican Party.  He won the GOP nomination, and was re-elected in 2002, 2004, and 2006, before being upended by Democrat Tom Perriello in the Democrat wave year of 2008.

Soon thereafter, exhibiting that characteristic independent streak, Goode joined the Constitution Party, and in 2012 served as that party’s nominee for President.  Most recently, he’s garnered some attention for his outspoken support of Donald Trump.

His latest contribution is an op-ed in the Roanoke Times in which he talks about the Trump phenomenon.  This is pretty helpful stuff for anyone still struggling to understand where Trump’s groundswell of support is coming from.  The article is headlined, “Blue-collar Virginia and the Republican Party of Virginia,” and explains it thus:

There are few things the inhabitants of the swamp on the Potomac (Washington, D.C.) fear more than real Americans waking up to the fact that they have been played, and betrayed.

I get that, and can sympathize.  As I’ve said before, Trump is a creature of the GOP’s own creation; rank-and-file Republicans are tired of empty promises and the same old politician-speak wrapped in false principle and bounded by obedience to political correctness.  If nothing else, Trump deserves credit for smashing that paradigm.

Goode then takes the Republican Party of Virginia to task for the statement of affiliation to be required to vote in the party’s March 1 presidential primary.  I beg to differ with him when he says it is a “transparent attempt” to serve K Street and the “DC Political Media Complex” by tending to exclude Trump voters.  As several participants in this debate have pointed out repeatedly, this requirement arose in the same way it did in 2000, 2008, and 2012: as a sort of compromise settlement of the perennial question about conventions versus open primaries to select candidates.  It had nothing to do with Trump.  If it had been about Trump, it would likely have gone much further than merely asking for a statement that the voter is a Republican, and would have required some expression of an intent to support the GOP nominee.

Be that as it may, Goode’s op-ed is worth the read.  The GOP has made decades worth of mistakes in alienating the voters who now gravitate to Trump.  Goode’s analysis, and the lesson we must take away from Trump’s candidacy (whether he wins or loses) is that we must find a way to get those folks back inside the tent without changing our core principles.

In other words, we have to start telling the truth to voters, and our elected officials have to start governing like they campaign.

The pledge is overdone. It would have been more of an issue if there was no real Democrat race, but with Bernie pulling up to Hillary I doubt many real Democrats are going to waste their primary vote in the Republican primary (you can only vote in one) and risk their own favored Democratic candidate losing.

I find it hard to believe that the SCC would be ignorant enough to push through this stupid pledge as an attempt to keep republicans republican. Especially when the last year or so has been filled with efforts to change the makeup of the RPV locals through slating and other underhanded means. If party purity was truly the intent then the RPV is blind as well as ignorant. Look at the appearance this has caused across the state, then get rid of this stupid plan.

After having read your blog article I suggest if you truly want to “find a way to get those folks back inside the tent without changing our core principles” right up front one would want to encourage the local and national parties to begin to LIVE by the core Republican principles you allude to and be much less concerned about “outsiders” impacting something the majority of the party establishment dismisses in the first place (admittedly I have little real hope for this outcome), as well as, disabusing your readership of the completely false notion that the Trump or Cruz candidacies have in anyway changed or in the slightest sense modified the way establishment Republican’s continue to go about their daily business either in Washington, DC or Richmond, Virginia currently. Trump hasn’t smashed any Republican operating paradigm, he hasn’t even put a dent in it yet to date. Any return to political “normalcy” which I interpret the Republican establishment to mean a somnolent and compliant voter base with no existential challenges to the political elite will either come through the manipulation of a brokered convention (resulting in a 2016 McCain/Romney clone that promptly on clue collapses in the general election) which will in all likelihood shatter the party organizationally or via the paradigm shift you allude to with either Trump or Cruz (although I am less convinced regarding Cruz as change agent) sitting in the WH. I believe one can confidently predict that regardless of path taken the Republican Party as we know it today will be irrevocably changed by the 2016 general election but that shift has yet to begin.

Somebody wrote that piece, but it wasn’t Virgil Goode.

Interesting that his ears are still open.
In this area they are the only ones.