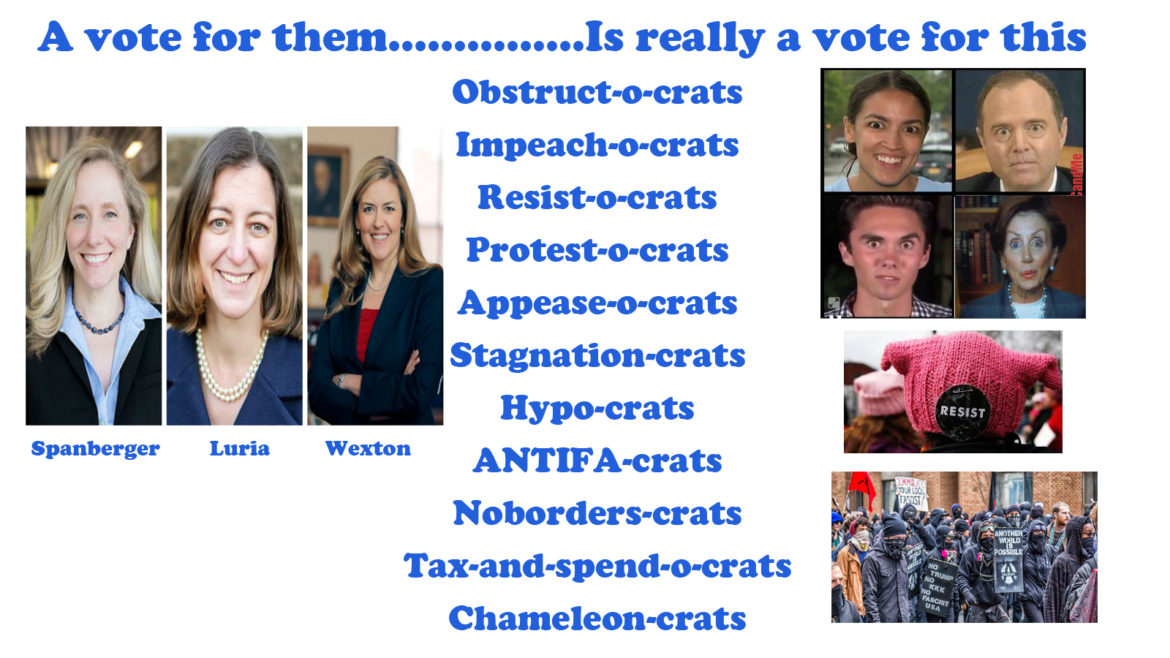 Republicans have to unmask their opponents as “Chameleon-crats”

The recent special election in Ohio’s 12th House district between Troy Balderson, the Republican, who holds a narrow lead over Democrat Danny O’Connor, should be a wakeup call for all of us, particularly given the fact that similar dynamics could be at work in a number of House races across the country, notably in Virginia.

Ohio’s 12th is a lopsidedly GOP district that Trump, and even Mitt Romney carried, meaning Balderson should have won more convincingly.  In fact, had there been no Green Party candidate on the ballot, O’Connor may have won.

According to “Ballotpedia,” 36 Republicans and 18 Democrats are retiring from the House , but some 121 seats are considered competitive (not “safe” or “solid”). To keep their majority, Republicans need 75 of the seats on this list while Democrats need 47, assuming none of the “safe” seats flip to the other party.

But Democrats need only a net gain of 24 seats and Rep. Nancy Pelosi becomes Speaker and her fellow California liberal, Adam Schiff, gets to lead the Intelligence Committee and subpoena a bevy of Trump family and staff in the Russia collusion investigation.   Republicans seem poised to increase their hold in the Senate.

The problem Republicans face is primarily in House swing districts in suburban areas with a number of college-educated professional voters, who should vote Republican to thank us for the wonderful work we have done on the economy and national security, but instead may do what Virginia voters did last fall and vote out Republicans in order to “send a message to Trump.”

“Fox News” and a number of GOP soothsayers like Karl Rove  are trying to build hope for the conservative base by saying there may actually be a “Red Wave.”   They harp on the eccentricities of the Democrats—notably, the unintelligent statements of 28-year-old New York Democratic Socialist House candidate Alexandria Ocasio-Cortez, or the moronic antics of Rep. Maxine Waters, among other Democrats.

However, voters in these swing districts will not see Waters’ or Pelosi’s name on the ballot. Instead, the Democrats have again cleverly recruited “sensible sounding” candidates, notably women, many of whom are veterans, such as Elaine Luria, a 20-year Navy veteran, running against ex-Navy Seal Rep. Scott Taylor in the 2nd district of Virginia  (and whose campaign staff are now under investigation for allegedly trying to use fake signatures to get a Democrat splinter candidate on the ballot)   and former CIA operative Abigail Spanberger,  who is giving Rep. Dave Brat a tough race in the 7th.

State Sen. Jennifer Wexton, who is a trial lawyer, is giving my congressmember, Barbara Comstock, a tough run in the 10th district (the most expensive House race in the country now.  This means at least three GOP seats here in Virginia could turn to the Democrats, especially if controversial GOP Senate candidate Corey Stewart helps add to a “Blue Wave.”

Nationwide, the Democrats hope to see a repeat of 2006 when they won both Houses of Congress using Iraq war veteran candidates, and running on the unpopularity of President Bush, the war in Iraq and the Abramoff corruption scandal in D.C.  Foreclosures and economic stagnation also were starting to surface that year.

But 2006 is different than 2018.  Today, we have a booming economy, ISIS is in a death spiral and North Korea is coming to the table to negotiate on its nukes.  Illegal immigration in a recent Gallup Poll  is of concern to one in five Americans (only 1% care about the Russia scandal).  Despite the chaos in the Trump White House and the President’s incendiary Tweets and statements, Republicans are solving problems.

So, tying Spanberger, Luria or Wexton to Sen. Bernie Sanders or Pelosi may not fly.

The challenge for Comstock, Brat, Taylor and a score of GOP House candidates is NOT just to run on their accomplishments in their districts, which are many, but “unmask” their Democrat opponents as the chameleons they really will be if elected Nov. 6.   Republicans cannot use “fear” messages to equate the Democrats with socialism, Venezuela, campus free speech squelchers, or they are insulting the intelligence of professional suburban voters.

Instead, voters should be reminded that today’s national Democrats have no agenda on taxes, trade, spending, and a host of international issues.  They have become “Resist-o-crats,” “Obstruct-o-crats,” and if they control the House, even if the GOP keeps the Senate, will become “The Impeach-o-crats.”  The campaign ads and rhetoric of these charlatans talk “bipartisanship,” “solutions” and even “working with Trump,” but that is NOT what they do once in office!

In simpler words, a vote for Spanberger, Wexton and Luria is a vote for a radical Leftist, anti-prosperity, anti-security agenda.  None of these centrist-appearing “Chameleon-crats” will ever form a Blue Dog majority.

The 2010 GOP retake of the House was won, in part, using the slogan “Fire Pelosi!  Today, the rallying cry should be 1982’s “Stay the Course,” or “Support Prosperity – Vote Republican.”  Or, better yet, the Reaganesque: “Are you better off now than you were eight years ago?” Please ask all those Republicans who voted for Obama in 2008 or sat out the Romney race in 2012 – “how did that work for you and the country?”

Also, ask your neighbors in Virginia who voted Democrat last fall to “send a message” – “how did that help reform Trump’s rhetoric or alter his agenda?”

I also think it’s a mistake for GOP candidates to “avoid Trump.”  But having him campaign in Virginia in rural areas, even where the 10th and 6th meet in the Valley, could be great to get the “Trump vote” to the polls.

Some may suspect that Trump may not mind a Democrat House takeover, as he might be able to get infrastructure financing and some other legislation passed.  And, if the Dems become “Tax-and-spend-o-crats” and “ANTIFA-crats,” this gives the President an issue to run on during his 2020 re-election bid.

But I would prefer to see the House stay GOP now so the President can get the rest of his agenda passed and see the country succeed – which it is. I am heartened by statistics showing more workforce participation, lower opioid addictions and dependency, and even better job prospects for high school and college dropouts, and minorities.  We are well on our way to “Keeping America Great!” under GOP leadership in Washington and activists should be out there feverishly calling and door knocking to remind voters of these great accomplishments.

How to negate the potential “Blue Wave” in House races this November was last modified: August 12th, 2018 by Guest Contributor Ken Reid

As hard as Republican candidates may work, and as much as you might want to push any good news, it will all be overwhelmed by increased Democrat turnout and a wave of anger and antipathy towards Donald Trump who brings it all on himself. As much as some Republicans enjoy “owning” liberals, all that happens is fanning the flames of hatred for those that want to see Trump taken down a few pegs.

I harken back to what I wrote last November when Republicans thought we were gong to do so well in statewide races:

“I really feel sorry for any Republican that was running on Tuesday. I can only imagine how hard it was for them to knock on the door of an undecided Independent and try to make their campaign pitch for their vote, only to have the President of the United States follow right behind them, give the voter the middle finger and tell them, “I DARE you to vote Democrat!”

I also wrote this in another piece around the same time:

“Different people can spin this anyway they want, but the simple fact of the matter is that this is 100% on Trump, and if we don’t do something about it now, 2018 is going to be even worse.”

Republicans need to follow Nikki Haley’s advice, stop worrying about trying to “own” the libs, and instead trying to persuade people to our side with common sense and sound arguments.

You are losing demographics for the last @#$king time. Establishment Republicans have overseen and aided the Democrats in a wave of immigration that is ushering in a Socialist Nightmare for the future.

Go look at the Youtube clip in the other article on this site where Joe Biden gloats over the fact that his [email protected]$$ is now a minority in his country.

You are going to be lucky in the future not to have Socialist Democrats, not the Democrats you have now. It has already started…

No, because Bush wasn’t actively antagonizing every Democrat in the Country like Trump the Retard is. Trump the Retard and his sycophants have not figured out yet that “owning the libs” in a tweet does nothing to stop them from voting against you and your party. In fact, it kinda does the opposite and gives more people that extra motivation to come and vote against you.

If you read the pieces wrote last November, you will see that it wasn’t demographics that lost us the elections in VA last year. It was a huge increase in Democrat turnout coupled with independents turning against Republicans.

I agree with Nikki Haley.

True, but if the Dems take the House, I don’t think they can resist the urge to impeach, even if theres no prospect for conviction and removal in the Senate. these newbies will be dragooned into voting for it by the liberal leadership and their base who want Trump damaged. tThats the point i was making. these centrist-seeming Dems are very liberal once they are in office.

There is really nothing to do at this point but ride it out. The time to heed the warning was last year. Unfortunately it seems the GOP has internalized the behavior of the President and seeks to emulate it to its inevitable downfall.

We are whistling past the graveyard, touting razor thin wins in races like OH-12 as confirmation that we are going to pick up seats or something, when the GOP should have won that race going away. We think this is just going to be a normal midterm election cycle, but it’s not. Even a normal election would give the Democrats an average pickup in the House and Senate to put control of both houses into play. This year is going to be so much worse The signs are all there, but the people in GOP leadership are too afraid to admit it, lest they earn the wrath of Trump and his sycophants.

When the Democrats take the House, and possibly the Senate, they will definitely vote to impeach at some point (probably in early to mid 2020). The Senate will fail to convict as expected, and Trump will move left and start signing bills sent to him that restrict gun rights, provide amnesty to Dreamers, and spend billions of dollars on pork projects that will end up benefiting himself and his pals.