Last winter I comforted myself with the thought that we would never again have a winter as cold with as much snowfall.  Loudoun County students missed 14 days of school!  (Fortunately they have an unlimited number of snow days.) Now I read that our kids could miss even more days in the coming winter!  The coming winter may be even worse than last year.   First Hand Weather has published their winter forecast by region: [read_more]

Mid-Atlantic: The Mid-Atlantic could even see a snowier winter than last winter and likely experience well-below average temperatures. This winter could rival some of the “snowpocalyptic” winters that occurred a few years back, which will likely end up making this a highly discussed topic throughout the winter. This will likely be a wetter-than-average winter for the Mid-Atlantic, and this region will likely feel the effects of low pressure systems bombing off the East Coast. This area will probably be impacted by several storms this season and may even feel the effects of a pre-season storm that may try to develop.

Most of the south will have below average temperatures and more snow: 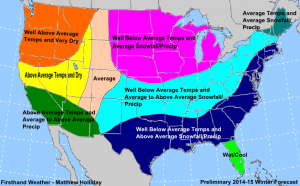 Farmers Almanac is also predicting a colder than average winter and a hotter than usual summer.

Sunday Memes–A hot mic is not your...

[…] few weeks ago I posted weather forecasts for the coming winter.  Several sources predicted that winter 2015 would be worse than the past winter.   At that time […]

I’ve been to Germany during the Xmas holiday, in Bavaria. It was very picturesque. The local ladies were great too. I ate many a lebkuchen from cleavage on that trip.

I am going to pray they are wrong…and plan to put more plants in the greenhouse!

Please, if you would, while on topic, I would greatly appreciate the weather forecast for the last two weeks coming December for Berlin? Vacation you see.

Danke! Fräulein, be it now?

Who goes to Berlin in December? It will be cold and rainy, like most of Germany in the winter.