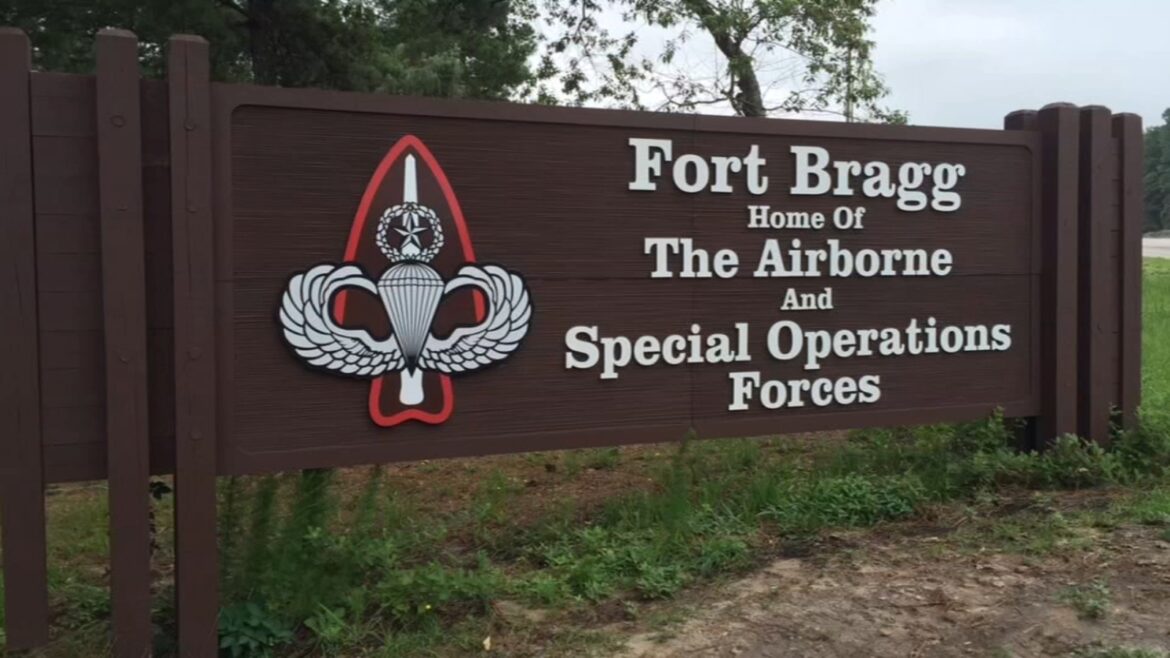 Critical race theory has become a dominant feature of American political life, and history is squarely in its crosshairs. Anarchist mobs angrily demolished monuments which, for generations, fostered quiet reflection. BLM, Antifa and their fellow travelers seek to expunge all vestiges of our complex history, supplanting them with simplistic Marxist ideology.

Democrats drafted the National Defense Authorization Act to require that military installations be stripped of the names of men associated with the confederacy. DoD is implementing that disgraceful policy now.

The measure was an attempt to placate those committing racial violence. Its passage reveals how little regard some in Congress have for the men and women whose service began on those posts and whose personal histories are inexorably tied to them.

Millions trained at places like Fort Bragg, Fort Hood, and Ft. Benning.  Hundreds of thousands left these bases to fight and die overseas.

Fort Bragg is home to the famed 82nd Airborne Division that fought in the Meuse-Argonne, at Sicily, at Normandy, in the Battle of the Bulge, the Tet Offensive and in wars across the Middle East.

General Bragg does not define Ft. Bragg; the 82d Airborne Division and the 18th Airborne Corps do. The name “Ft. Bragg” personifies those illustrious units and the courage and fortitude they exemplify. For a hundred years, descendants of elite paratroopers have regaled their offspring with hair-raising tales of battlefield bravery that began at Ft. Bragg.

Renaming military bases dims the memory of soldiers who served there. It rewards leftist hate, looting, arson, and murder. Until the racial dust up, few soldiers knew anything about General Bragg. I served for 32 years without knowing he was a civil war figure. But I knew one thing for certain: the name “Ft. Bragg” embodied courage, valor, and self-sacrifice.

The names of all of these bases are woven into the personal histories of America’s veterans. Their removal is an act of hatred toward veterans. The left erases language it dislikes, and it doesn’t stop with renaming bases.  It permeates things from football teams to pancake syrup, even redefining what boys and girls are.

Millions trained at those bases and left to die or be crippled in battle. They asked only a shred of remembrance in return. But now, Democrats intend to rip away that pittance of recollection in order to pander to woke mobs that helped elect them.

How shameful that American veterans are cast aside so that anti-patriots can rewrite history. Republicans must pledge to reverse this abhorrent decision when they retake Congress in November and restore the names of our military bases.

The names don’t matter. Some day the bases will be gone. Who remembers the bases of ww1 or ww2? Or Korea and Vietnam? They are nothing but memories, a documentary, or fleeting words in some book. The real history is passed word of mouth in the troop.

Well… I think some people may remember Khe Sanh…. or the Rockpile. Verdun is pretty memorable in WWI. WWII was a more mobile war.. but I guess Stalingrad was sort of a base as was Leningrad. Guadalcanal had Henderson Airbase..which is pretty memorable. And if you want to look at the Island campaigns that cost tens of thousands of American lives… the Japanese Island defenses were pretty much bases… Saipan… Iwo Jima etc.
But do they matte to the TikTok generation… like the fool who Bribem nominated to be the Secretary of the Ministry of Truth? No… they don’t. Orwell had that right… a good way to control people is to control the narrative and memory holing history is very effective.

In Saipan they have gun emplacements right next to today’s sidewalks. I would climb down inside a pillbox and try to imagine the sight the gunner had as he looked out over the beach as the armada approached. I knew many of my friends fathers who were also looking at that beach back then.

Leave history alone. You can not change the past.

“Yet it stands today and is visited by thousands. Why does it stand? Because its best use is as a reminder of the real history that was the Holocaust — Adolf Hitler’s mad attempt to destroy the Jewish race.”

Please note, no one ever wanted to name a military base Fort Auschwitz. Nobody would have any issue if you wanted to construct a Bragg historical exhibit to remind people that he was a traitor to his country and that he lost nearly every Civil War battle to the honorable Union commanders. That would probably go over well.

Well, I do not think it will take another 150 years for people like you to want to change the George Floyd history into the actual truth . You see, George Floyd was high on illegal dope, trying to pass a counterfeit $20, and resisting arrest. Yet, you, the Crats’, have made him into your Superhero. Let’s see how long it takes you left wing bastards to want to flip that one into reality. You Crats’ are already trying to rebrand as the law and order party, are you not? How big a lie is that whopper? God luck with that BS. Your misfits are already crying for more police.

Pelosi, her lifelong church refuses her communion , at least at home out west, Brandon, he had to go see the Pope for a sit down in order to be able to take communion in his lifelong church. And, Pelosi’s husband just inhaled a DUI over the holiday weekend. What a pile of shit.
Setting great examples for who? The children? The Catholic Church, apparently they let people who support abortion, which I think they themselves consider being baby murder, be members of their church. In the 1960’s, the church I went to would not let people join if they even smoked cigarettes. My, what a change.

Brandon has “us” in another war, I guess 10 ‘s of thousands of people dying. About $750,000,000 to Ukraine every day since the war started. Gasoline prices setting a new record daily, food prices about to go where no man has gone before. Inflation off the scale.

And let’s see, you bring your chicken shit routine in here to talk about the name of some Fort? People like me, I actually feel sorry for you. You just do not know any better. I have to remember that.

Ummmm… the original post, and comment I quoted) was all about the renaming of Fort Bragg… you seem to not be tracking very well… and really might have stepped over the edge, too…

Erica, pronoun She It… you have the second best chickensh.t routine here on Jeanine’s blog! You can’t match Dunghead Martin for useless comments, but you definitely are best at bringing the bullcrap. I love the Biden Boom ones! Your head is so far up your bunghole Erica… That Biden boom crap you routinely fart out here. His administration is a total disaster. His government a confederacy of dunces… there’s not one success in his administration as pointed out in the comment above.
Inflation skyrocketing… the stock market shedding trillions in value (and that is a disaster for pension plans and 401ks)… then you have his stupid administration funding a war that is making all of the above worse.
Well Erica… back to renaming bases, streets, tearing down monuments… it’s all you have pendejo.

Edgar!! Are you really having that much trouble reading this article? (hint: it is about renaming military bases)…. ????

Yeah Erica… when do you not insert some crap about Biden boom regardless of the content of the article. And what does Auschwitz have to do with renaming an American military base? And how about that Bribem Boom numbnutsy?

James Poplar brought up Auschwitz in his comment below, Edgar… that is why I quoted it… not the sharpest tool in the shed, are you Sport…?? do try to keep up…

Spot on and SF ! The Auschwitz concentration camp in Poland was the largest Nazi concentration camp and extermination center. Over 1.1 million men, women and children were cruelly murdered there. If ever there was a symbol of pure evil that merited being bulldozed it was Auschwitz. Yet it stands today and is visited by thousands. Why does it stand? Because its best use is as a reminder of the real history that was the Holocaust — Adolf Hitler’s mad attempt to destroy the Jewish race.

In 2019, German Chancellor Angela Merkel visited Auschwitz and remarked, “Remembering the crimes … is a responsibility which never ends. It belongs inseparably to our country. To be aware of this responsibility is part of our national identity, our self-understanding as an enlightened and free society.”

Readers may also recall ISIS’s crazed attempt to destroy all vestiges of ancient Christian imagery and edifices because that particular slice of history did not fit their view of the world. As hard as they tried, they could not erase history. History may be brutal, ugly, or merely politically incorrect, but it is the unpleasant history from which we stand to learn the most. For decades, Japanese schoolchildren could not read about World War II in their history textbooks, because it cast Japan in a bad light. Years of worldwide condemnation and ridicule finally changed that situation. Is the U.S. ready to head down that same shameful path?

We all learn, from the examples of others, to face our challenges head-on, acknowledge our failings and move forward. Pretending bad times and bad things never happened does nothing to “correct” our history, much less our future behavior. As Americans we are still better than that. Future generations of Americans will thank us for the honesty we show in preserving and learning from our past rather than covering it up.