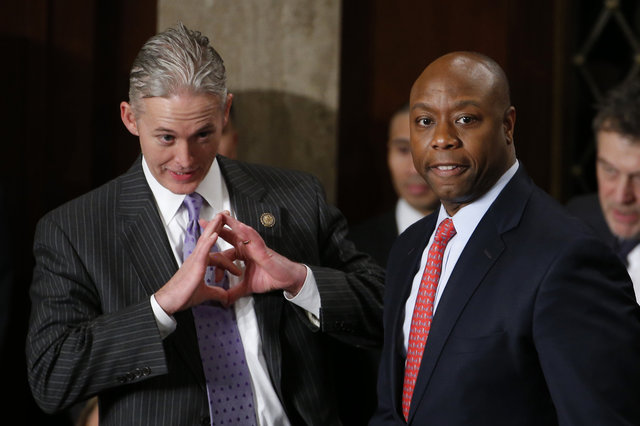 TREY GOWDY AND TIM SCOTT TAKE TO THE AIRWAVES FOR MARCO. Â The Florida senator has enjoyed twoÂ huge endorsements from these Congressional leaders from South Carolina. Â They’ve now recorded a pretty effective radio ad for him which you can listen to here,Â in advance of this Saturday’s crucial South Carolina primary. Â Here’s a transcript:

SCOTT: Trey, one of the things that concerns me the most about this upcoming election is that whoever wins will decide the fate of the Supreme Court.

GOWDY: You are exactly right. It doesn’t matter who you want to put on the Supreme Court if you cannot win in November.

SCOTT: It does really zero-in on the most important issue, which is not only picking a candidate who can win, but picking the conservative that can win.

SCOTT: I think Marco says it really well when he says let’s not try to just make a point. Make a point, that is a good thing, but let’s make a difference.

RUBIO: I’m Marco Rubio and I approved of this message.

Rubio tried to explain the Gang of 8 bill the other day by declaring that hey it wasn’t intended to be a law… The House would save his POS bill!

That is a new angle to get idiot to vote for him.

Hillary Clinton got away with Benghazi and Trey Gowdy pontificates… I’m supposed to care what he thinks regarding that Gang of 8 “amnesty pusher” Rubio?

“Marco Rubio is the sixth most conservative member of Congress, House and Senate, according to Heritage”

Ted Cruz is the first, and he didn’t try to ram amnesty down our throats.