SEISMIC SHIFT IN THE 7th: What does Cobb’s ouster mean for the GOP?

First, what happened? For the uninitiated, it can be difficult to read through all the inside baseball stuff about “slating” and “mass meetings” and the “Party Plan,” etc., so I’ll cut right to the chase. The big story is that Rep. Eric Cantor’s right hand man in his district, who served as that district’s GOP chairman, was ousted today at the 7th District GOP Convention by an insurgent coalition of those disaffected by the chairman’s and Cantor’s grip on local politics.

Much, but not most, of the anger channeled into bringing about this ouster has to do with a preference among many grass roots activists for nominating candidates via conventions rather than consultant-driven open primaries. But at bottom, for most of those in attendance at the 7th District GOP convention this was about finally having a seat at the table inside the Republican Party.

The Role of the Tea Party
A friend remarked to me after Cobb’s defeat that what made this possible was the unique vitality of various Tea Party groups within the 7th District. I responded, “Do you think that’s a coincidence?” In fact, it is not, but is instead a direct consequence of the way Rep. Cantor and his supporters have consistently circled the wagons around the Congressman to ensure as much control of the local politics surrounding him as possible. Where in other districts, like the 1st District where I live, Tea Party and libertarian newcomers have been welcomed into the GOP tent, in the 7th they have consistently been made to feel unwelcome inside the GOP.

Where in the 1st District my Congressman, Rep. Rob Wittman, has consistently reached out to and engaged with local Tea Party groups, and where party leaders like 1st District Chairman Eric Herr have eagerly welcomed the new energy and vitality they bring to our own processes, in the 7th the reception has been much more of a “barbarians at the gate” affair. The contrast could not be more stark: in the 1st District there is relative tranquility among various components of the conservative coalition, while in the 7th there has been open warfare. That’s because if you keep shutting people out, sooner or later you’re going to have so many people on the outside with an axe to grind that shocking upsets like the one today become almost inevitable.

Cobb supporters rightly note that he ran a very tight ship, and that all the trains have run on time inside the 7th. I even have had people praise Cobb to me by pointing out the total harmony in his 7th District meetings: everyone agrees on everything. These folks, like those advising Cantor, fail to see the irony in that: sycophantic unanimity is more a symptom of a problem than a condition flowing from superior leadership. 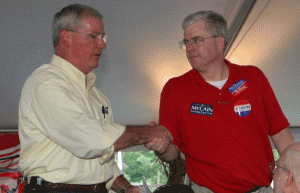 We’ve written before about Ray Allen, who is Eric Cantor’s top consultant and who has been the architect of a campaign this year to flip a number of district chairman seats to candidates friendly to Cantor—and friendly to the nominating primaries that make so much money for Allen. It’s time for Eric Cantor to fire Ray Allen, whose lack of acumen about how to handle intraparty politics since the rise of the Tea Party in 2009 has done nothing but put a huge target on Eric Cantor’s backside. The fact that Cantor has, for the first time really, a serious primary challenger in Dave Brat is no accident.

Neither is it an accident that the mainstream grassroots Republicans who teamed with Tea Party and libertarian activists to take down Linwood Cobb were particularly energized this year, given Allen’s “slating” campaign. As we’ve detailed extensively before, this involved essentially disenfranchising well over a thousand GOP activists in key jurisdictions around the state, using tons of paid staff working through the Cantor-affiliated 501(c)(4) group, YG Network and its local Virginia project, YG Virginia. The Ray Allen-engineered slating has done nothing more than vigorously poke a nest of already-angry hornets. And, despite the hundreds of thousands of dollars spent by Cantor forces on district chairman races so far this year, they have essentially NOTHING to show for it except an enraged Republican base: of the district chairman races this year, there is currently either a net loss of one for Cantor depending on the outcome of a disputed contest, or at best, a wash.

That’s not exactly a good investment of financial or political capital for Rep. Cantor. Worse, the local troubles Ray Allen spawned had already been part of the conversation among Cantor’s GOP colleagues in the House who are worried that if he can’t maintain relative peace at home, then as Speaker he’s unlikely to be able to manage the fractious collection of House Republicans and a hostile President. Today’s events will undoubtedly make the Speakership that much more tough for Cantor to gain. If I were Cantor, I’d be saying, “Thanks for nothing, Ray.”

What’s next for the Republican Party of Virginia?
Today’s shocker was much less a victory for the insurgent candidate, Fred Gruber, than it was a defeat for Cobb, Allen, and Cantor. Gruber is, after a fashion, the dog that caught the car.

That’s a problem going forward, as Gruber has a lot of work to do to prove himself capable to the other members of his committee, most of whom are utterly horrified at Cobb’s ouster. More broadly, the conservative coalition that got behind Gruber must be magnanimous, and cannot gloat or slip into vindictiveness. Further, they cannot campaign on inclusion and transparency and turn around and even think about shutting anyone out. Now that they’ve gotten their seat at the table, it’s time to practice what they preach, and work quickly and diligently to (a) prove they deserve to lead, and (b) start to heal what, as of now, are still-bleeding wounds. And, once things have settled down, I hope Gruber’s colleagues on the 7th District Committee can be open to working with him between now and November.

The outcome today has shocked the so-called establishment in Virginia’s GOP to its core. Likely nowhere is this shock felt more deeply than among the top backers of U.S. Senate candidate Ed Gillespie. It is unlikely that Ed’s team anticipated this big of an expression of anger and discontent among the grassroots activist base in the “establishment” bastion of the 7th District. I’m sure the reception Shak Hill received from those in attendance who favored Gruber over Cobb has not gone unnoticed by Gillespie’s team, and that they have grasped that Ed could actually lose at the June convention in Roanoke. Conversely, the events in the 7th District were a shot in the arm for Shak Hill, whose campaign has been flying under the radar with very little money and a shortage of staff and statewide organization. It would easy to read too much significance into this for the Senate race, but it should be a big warning sign for Gillespie.