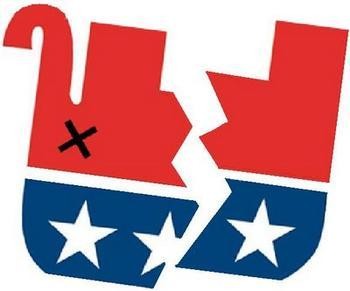 Will Trump Shatter the Party?

Will Donald Trump shatter the Republican party? Â Peggy Noonan thinks so, as do I. Â When asked if Trump could bring down the party Noonan said:

He could break it. He could break it. Imagine what happens if he racks up a lot of delegates, they get to the convention, it looks like Trump has won, and the party machinery finagles it away from him. Trump supporters would blot the Republican Party. At the same time if Trump waltzes to the nomination, there is a major sliver, and maybe not just a sliver, at the top of the Party that will start a Republican Party in exile. Or you can quite imagine that happening. So weâ€™re seeing something big. â€

Will Trump Shatter the Party? was last modified: March 2nd, 2016 by Jeanine Martin

Lord, this is getting old, Jeanine. If Donald Trump wins the nomination, our party may indeed be in big trouble. But if Clinton wins the presidency, our country will be trouble.

Yes, it would appear we are in big trouble either way. This may finally be the time for a new party to emerge from the ashes of the current party.

There is no hostile takeover by Trump. The elections are open and free for the voters to make their selection of who they think best represents them.

Lots of wasted time whining on this blog by those whose candidate continues to lose. Trump has brought in more folks into the Republican Party than any other candidate since Reagan. He should be thanked and embraced by the Roublucan Party not attacked.

The Republcan Party failed miserably attempting to stop Barry Goldwater from receiving the nomination and Trump will do the same.

The Party isn’t broken. It’s the people in it who think they are power brokers. Establishment types who think We the People are too stupid to run our own affairs and we must go to them for our every need. We need to wrest our Party back from these types, but sadly no one seems to want to take on the job. It is daunting, and those folks are few and far between.

In short, yes. And if Trump is the nominee, the GOP deserves to die for making him the candidate.

The GOP needs to die for creating this environment for Trump to thrive in.
Trump is commiting a hosltile takeover of the party by courting supporters who the party only cares about on election day.
Joseph will republicans look to recapture these voters ?
Recent history in the Campbell County Republican Party says No , greed ,ego and controll is is the wicked adiction of todays self proclaimed Regan republicans .
Stop trying and lying about aspirations of someone else be genuine men that stand on thier own merits not dead mens merits.

We can’t recapture Democrats who are voting for Trump because they know he’ll lose the general.

Where am I lying?

Joseph , you are not lying.Republicans as a whole lie to the public on what they will do and by what they have done.
The biggest lie is ” Comphrehensive Immigration Reform ” , where is the enforcement in ” Comprehensive ” ?
Yea go after Trump , no matter to me , what does Cruz offer for enforcement ?
And E-Verify is the biggest lie !

Yes, politicians, Republican and Democrat, lie. That we can agree on.

Cruz spoke about the wall long before Trump did. Long before.

This is the Cruz plan: “First, secure the border, once and for all. No other reform is meaningful if we do not fix our porous southern border.

Second, strengthen and enforce our existing immigration laws. We must reverse President Obamaâ€™s enforcement ‘priorities,’ which allow a large number of criminal aliens to unlawfully remain in the United States.

Third, pursue reforms to the legal-immigration system that will prioritize the interests and well-being of Americans. As a nation built by those fleeing persecution and seeking freedom, we must once against welcome and celebrate legal immigrants while at the same time protecting American jobs and interests.”

The party should thank Trump for bringing so many voters to the polls.

I was a poll worker, very few people openly professed to be voting for Trump. The one that did was a Democrat, another mentioned that her son was thinking of voting for Trump to sabotage the Republican primary.

You can’t break what was already broken. They’re just too arrogant and power-hungry to acknowledge it.

The elites on both sides of the aisle are not willing to give up control. Just listen to Kristol saying how he’ll support Hillary if Trump is the nominee. Of course he will. She’s one of them. The Benghazi hearing were a sham. Trey Gowdy was a joke – he never intended to hurt Clinton in any meaningful way.

They’ll attempt to do to Trump what they did to Cucinnelli – no support for a non-establishment guy. Better to have a guy we can control like McAuliffe – makes no difference that there’s a D next to his name.

The RNC failed to win the popular ballot but once, since 1992. The RNC has itself to blame. Pushing amnesty and huge sellouts of American sovereignty through poor trade deals has alienated many Republican voters. We have lost faith in the Republican party at the national level, and I say this as right-wing activist.

Although Rubio won MN, he and Cruz got the same number of delegates from the state. https://www.washingtonpost.com/graphics/politics/2016-election/primaries/delegate-tracker/republican/