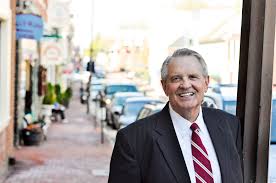 Why appoint a former Planning Commissioner when a former Supervisor is available? Isn’t a former Supervisor preferable to someone who has never served on the board? Republican Steve Stockman previously served two terms on the Board of Supervisors. He lives in and knows the Broad Run district. Steve knows how the board works and can immediately step in to represent Broad Run District with no lag time.  Steve Stockman will need no on-the-job training.  He knows well how the board functions.

It just makes sense to appoint Steve Stockman to serve the Broad Run district on the Board of Supervisors. Let’s hope Chairman Scott York will do the right thing for the district and support the appointment of Stockman to complete the term.

Steve Stockman Should Replace Shawn Williams on the Loudoun Board of Supervisors was last modified: September 7th, 2015 by Jeanine Martin

Searching for that Elusive “Simple” Solution

If you support this appointment, please let Chairman York and your supervisor know your feelings. You can write the entire board of Supervisors at this address, bos@loudoun.gov

You are absolutely correct. Stockman has demonstrated a superior working knowledge of Board functions and order. I heartily endorse him as a smart choice.