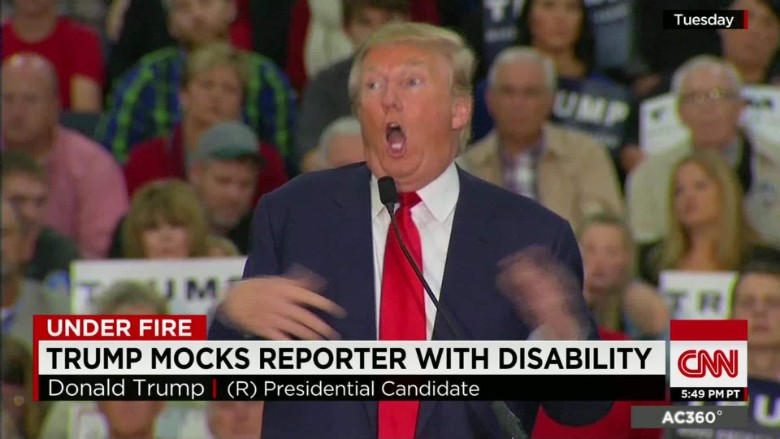 Is the Bloom Off the Rose? Trump’s Numbers Drop

Trump’s poll numbers drop 12 points in less than a week.  In the latest Reuters/Ipsos poll, Trump dropped from 43% to 31% in the five days ending on November 27th.  Ben Carson is also dropping in the latest polling.  Trump’s numbers began dropping after his comments following the Paris attacks and his disgusting display making fun of  handicapped reporter, Serge Kovaleski.  More here.

Is the Bloom Off the Rose? Trump’s Numbers Drop was last modified: November 28th, 2015 by Jeanine Martin

Jeanine Martin – apologize to Trump now for YOUR
“disgusting display making fun of
handicapped reporter”. You
are an establishment Uniparty hack if you believe it, but I don’t think you do. Maybe you are uninformed, or just another party progressive hack spreading
dis-information. Bet you like Yeb.

TruthFirst – are you saying that his making fun of the reported was not disgusting or that he did not make fun of him at all?

[…] any skill in the rough and tumble of this game, and they’re not completely invulnerable, as the latest polling shows. Other candidates, like Carly Fiorina, will gain from any problems the outsider frontrunners have, […]

My problem with this poll result to date is that it is still a one off AND that it is the left-wing group out of Reuters which has produced some very funky polling numbers in the past especially regarding Republican and/or Conservative election races. That some shifting has occurred may be correct but a confirmed 12 point drop I’m very dubious regarding that result. A larger sample of polls would be more informative as to what is going on.

Nope, not at all! Trump is still the frontrunner! https://www.washingtonpost.com/news/the-fix/wp/2015/11/27/donald-trumps-various-rude-and-offensive-comments-havent-hurt-him-at-all/