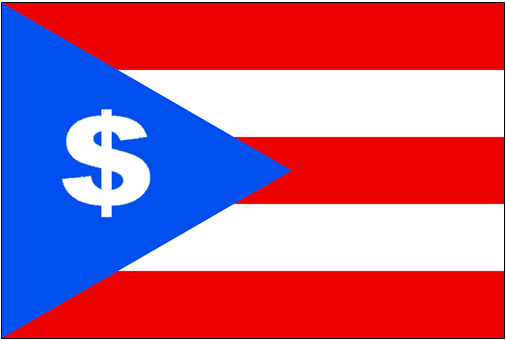 As our national debt exceeds $19 trillion, House Republicans, with the support of President Obama, are proposing a massive bailout for Puerto Rico.  This legislation will rattle municipal markets, raise borrowing costs for states and further open the idea for congress to swoop in and save mismanaged states such as California that are “too big to fail”.  We’ve heard this argument before from Congress that we must support this bailout to save ourselves from a worse financial situation.  When will it stop?  The Virginia Tea Party Patriot Federation is willing to call a spade a spade, the get out of jail free cards for irresponsible fiscal practices must stop. We call upon Speaker Ryan and Republican leadership in Washington to take the lead.

For the last several months Puerto Rico, a U.S. territory, has claimed it will not be able to pay it’s roughly $72 billion debt.  Instead of attempting to curb its economic catastrophe with free-market reforms or cut government spending, the Puerto Rican Government, which employs a whopping 25% of the island’s citizens, requested assistance from the Obama Administration and Congress.

In March, Republican leadership proposed a bill that would allow the Puerto Rican government to restructure 100% of its debt, even bonds that have a constitutionally-backed guarantee of repayment, which is unprecedented and something no state has the power to do. Constitutional legal scholar, Logan Beirne reported that “Representative Bishop’s plan threatens to disregard property rights in favor of a nostrum – one that will help make Puerto Rico’s debt death spiral perpetual.” He further stated , “This plan will serve to protect the existing politicians, drive up Puerto Rico’s future borrowing costs, compromise ongoing good-faith negotiations, and maintain the island’s dependence upon the United States as we wait for the next crisis to build.”

Nevertheless, in an effort to push the legislation through prior to November elections, Speaker Ryan recently tried to reassure conservative lawmakers that this is not a bailout like those in 2008.  The Speaker’s arguments sound similar to those who defended the TARP bailouts who praised abandoning the free market to save the free market.  The Speaker argues that we must do something now or we will be looking at a bigger and more direct taxpayer bailout. Historically, settling for bad legislation to avoid worse legislation has never proven to be good public policy, nor turned out beneficial for the taxpayer.

This legislation is in fact a bailout and should be stopped.  Allowing Puerto Rico to restructure its debts under the current legislation rules will bail out progressive politics and a crony-capitalist framework in Puerto Rico on the backs of American savers and retirees. The Speaker can try to win the public relations war by assuming Americans won’t read the legislation or understand financial markets, but restructuring Puerto Rico’s GO bonds will raise borrowing costs for states, meaning they will be unable to complete important infrastructure projects like roads without raising taxes to make up for increased borrowing costs. Even more troubling is the precedent of setting new rules on federal intervention to allow overspending states such as California, Illinois and others to seek the same assistance, which equates to Washington taking more money away from hard working Americans.

Congressman Rob Wittman, who represents the 1st District of Virginia, serves on the committee which will continue to hear these requests from President Obama, the Speaker and Puerto Rico, has taken a stand against the leadership’s bailout measure. We are calling for all Virginia Congressmen to stand with Congressman Wittman against the Republican leadership pressures he will certainly endure in the coming weeks.  The idea that savers, retirees, taxpayers or even state governments should be responsible for irresponsible policies of Puerto Rico, self-serving Obama Administration officials, and Republican leadership is simply more Washington cronyism.  The Virginia Tea Party Patriot Federation continues to challenge our leaders in Washington to make the tough financial decisions needed to balance our budget and to pay off our debt for our children’s future.

Rick Buchanan is a resident of Fauquier County and serves as the Chairman of the Virginia Federation of Tea Party Patriots.

The take away for me regarding this entire congressional process is

1) the implication and precedent it sets for the federal government’s involvement in these type of debt restructuring events among future states that have willingly abandoned fiscal responsibility (e.g. California, Illinois and several others) and will look to the federal tax payer to bailout their uncontrolled spending habits;

2) House Speaker Ryan once again circumventing the conservative Freedom Caucus to work directly with Obama and Pelosi to put in place basically a Democratic plan to address the Puerto Rico debt default, leaving many of his opposing fellow conservative party members uninformed and muted. This is something Ryan so piously claimed he would NEVER do (after of course claiming he never wanted the job in the first place) before succeeding Boehner and then promptly pushing the awful 2016 Omnibus spending bill with the Democrats, in the end funding the Obama Administration for more then then had even originally requested.

The reasonable conclusions to draw from these actions is that Ryan is indeed an even more completely disingenuous, ineffective and openly accommodating Republican Speaker then Boehner ever was and the conservative wing in the House, put in place by the hard working efforts of the Tea Party movement over the past decade are a completely ineffective group of conservative legislators when it comes to managing the people’s affairs and protecting their financial well being.

I say we just cut Puerto Rico loose and let them be a (very broke) independent country.

What exactly do we gain by keeping them as a US Territory? We’ll be bailing them out again in a few years (think Greece). They’re just a drain on the system.

Not a bad idea. It used to have strategic naval importance but not so much in the era of modern naval warfare.

A new Ellis Island big enough to accommodate all the Refugee Resettlement coming in from Eurabia. — A floating safe space that, unlike Guam, will not tip nor sink.

That’s not a bad idea either.
It’s genius day at TBE.
Can we start a: What are the Top 10 Things We Could Do With Puerto Rico?” blog post?

We could just make them a state at the same time we do the District, keeps the even-state custom going.

We are just so screwed, can’t wait for The Donald to force Congress to molt a backbone.

I’ll pass. The Guantanamo idea is much better.

How would we know the difference?

Sometimes I like to see if I can actually make TBE actually explode on my screen with just the power of my posts.

I heard that PR overwhelmingly rejects statehood as it would take away too many of the goodies that they already get.

There are so many municipalities in the same predicament. Pretty much the entire Democrat-held rust belt cities are in the same near-default situation. They all want to avoid the consequences of their failed liberal fiscal policies. This bailout will begin the domino effect of letting liberals off the hook.
To link this to the other post, one of the reasons Conservatism is flailing is because bad policies are perpetuated by easy borrowing. Money if the fuel of the liberal fire. Stop borrowing and spending and the world is a very different place. I encourage everyone to know what their municipality is borrowing, what the debt levels are, and always encourage your elected officials to not borrow. If you live in Loudoun County, ours is $1.6B and increases roughly $150M per year.

This article is absolutely on target. I’ve watched the unfolding disaster in Puerto Rico for years, and was often tempted to buy those high yielding bonds issued by Puerto RIco. But no, I resisted temptation because it was obvious that they would be unlikely to pay as promised. Now to have all those investors and Puerto Rico putting their hands out for a taxpayer bailout, at taxpayer expense, is ridiculously unfair. The only way people will stop this outrageous behavior is to have them feel the pain now. Otherwise every Democrat run municipality in the country will do it to us again.