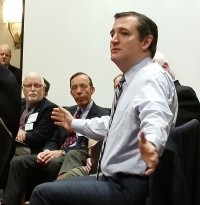 Nope. He supported the TPA. Watch him say so —
http://theconservativetreehouse.com/2015/11/11/senator-ted-cruz-did-support-tpa/

Love Ted Cruz! I’m so glad he came to VA.

Lots of respect for Sen. Cruz, but I’m with Sen. Paul.

does he get TBE endorsement?

How do women view Cruz?

RR: I can only speak for myself. His extreme social conservatism turns me off.

According to Erick Erickson and the data he has been collecting, Cruz is doing well with women, Social Conservative and not.

i can’t see him beating Hillary.

Won’t know until he tries. If he gets that far, he’s still got Trump, Carson(my candidate) and Rubio to get past.

Who can you see beating Hilary?

who can get the young + minority vote? to answer your question, I am not sure we have anyone that can beat her if she 1: remains healthy & 2: remains out of jail.

I’m sure we do. Her record is a piece of swiss cheese for all the holes it has in it.

Part of the reason Joe Biden was picking up steam is become Hilary’s support is a lot shallower than it looks.

And she is losing traditional Democrat support as well. An example for you, have you checked out her polling with men? Because of her “I am woman it’s sexist not vote for me” spiel she has a rather lagging showing among Democrat and Independent men.

Women are the majority of voters by a few points, lose a few points among men and she is in trouble.

Young people aren’t all that enthused by her. Republican groups found out that her “support” is being exaggerated by her campaign and that few millennials are showing up to her events.

Given how PC college campus’s and their “War on Women” routine is, that should be very alarming to her supporters that she isn’t gaining overwhelmingly substantial support among young voters.

Minority support for her counts on our candidate being the boring white guy. Carson, Cruz, Rubio, and Fiorina aren’t that. Any of them get the nomination, and if the VP pick is a smart one, a woman for Carson, Cruz, or Rubio, and a candidate that can do good minority outreach for Fiorina, and Hillary’s very few good points are negated.

As I said, Biden wouldn’t have gotten anywhere if Hillary wasn’t weak. Democrats are going to play with the quarterback they have and hope that enough PR proclaiming her as unstoppable will stop people from looking at the data showing she is vulnerable in a ton of areas.

I can! He would run circles around her in a debate. Just ask Alan Dershowitz, http://dailycaller.com/2013/05/09/dershowitz-tex-cruz-one-of-harvard-laws-smartest-students/ Cruz is brilliant. I would pay a lot to see Hillary and Cruz debate.

that’s a big difference between you and me. I would watch it on TV for free.

But far preferable to Hillary, right?

What social conservatism is that? I heard him speak for an hour yesterday and he never mentioned any social issues. Never said anything about gays or abortion which what I assume you mean when you say ‘extreme social conservatism’.

Google his evangelical comments. Also he was all for Kim Davis. Try googling his father Rafael

I don’t really care about his father, nor will the nation. Joseph Kennedy was a crook and philanderer, and no one cared, the nation loved his boys. Don’t care about Cruz’s religion either.

but his father is campaigning for him, often speaking as a surrogate. He claims that homosexuals want to legalize pedophilia. Ted Cruz references his born again father with pride. Jeanine, this will not play well in swing areas.

That’s nice but I’ve never heard of his father and I doubt 98% of other Americans haven’t either. Again, no one pays attention to parents of candidates. Cruz can be proud of his father without agreeing with everything he says.

Who are you supporting for President? Bush or Kasich?

Who is Kim Davis?

Kentucky clerk due in court over gay marriage boycott

Gee, I had already forgotten about her. A year from now I bet most Americans will have too.

Judging by some of the social conservatives on his list from Va not good at all.