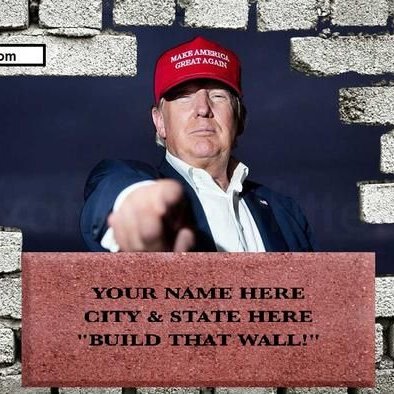 The Brick in the Wall

A key part of President Trumpâ€™s Southern border control initiative is to build a big beautiful wall with a big beautiful door in it. Â He has said he will initially use federal funds to build the wall but intends that Mexico will ultimately pay for it through a variety of federal legislative measures. Â But there is another way, and one that makes a significant point.

â€œBuyingâ€ bricks for walkways, foundations, and monuments is a time-honored tradition in America as a way to raise money for worthy as well as charitable causes. Â Funds are donated in some predefined amount, and the individual donating will be memorialized in some way, including receipt of a personalized brick. Â Virtually any organization can use this fund raising approach, and can achieve additional value through the creation of a new sidewalk, or even a wall.

So why shouldnâ€™t the American citizenry â€œBuild the Wallâ€ with their own private money? Well, guess what, they have already started to do just that. Â There are a number of websites that offer to sell personalized bricks as well as personalize t-shirts (see Amazon.com for the latter). One website, Bikers4Trump offers to sell a purchaser two personalized bricks, one as a memento and one to be place in the wall. Â Bricks sell for about $60 a piece or two for $100. Â There are other websites offering variations on the brick theme so I suggest anyone interested in contributing use a search engine as new ideas may very well pop up over the next couple of months.

This personal â€œBuild the Wallâ€ approach reflects the quintessential American â€œcan doâ€ spirit that doesnâ€™t wait for the government but just â€œdoes itâ€. Â Obviously, if you think the wall is a dumb idea or too expensive or too risky because some crazed anarchist just might decide to pay you a visit, you wonâ€™t contribute. Â But if you are with the President on gaining control of the Southern US border, buying a brick just might help make the point that American citizens have had enough of the uncontrolled national border situation.

In the interest of full disclosure, I havenâ€™t bought a brick or two yet. Â I would be more comfortable if the Heritage Foundation was sponsoring the bricks, but if this initiative grows over the next month, I will chip in – after all I buy those White House Christmas ornaments so why not a brick which will actually have my name on it and be of use?

The Brick in the Wall was last modified: January 29th, 2017 by Dr. Robert Warren

I fear all we have done is to awaken a sleeping giant and fill him with a terrible resolve.

I like the new line of reasoning – that these protests are the Left’s “TEA Party”. I hope that Democrats keep believing that.

Thing is, for all the fireworks, for all the pink cat ears, burned cars, and protests, none of that is about creating a single job in Wisconsin. It’s just the same crap that lost Democrats this last election, except louder, with more television exposure.

Ask yourself this – when the mayor of Charlottesville declares his City a Sanctuary for illegal immigrants, is that going to convince a single Trump voter to come back to the Democratic party ?

I watched the Muslims takeover a portion of DFW airport for a prayer vigil that intruded on the rights of infidel travelers. Looks exactly like similar takeovers of streets in Londonistan. You are right about resolve, seeing this non-violent terrorism in play, I know Trump is absolutely right. Sadly, he didn’t ban Muslims only Muslims from terrorist nations. And, by the way, thanks to Islamic genocides in the mid-ears, there are very few Christians to become refugees – and that is on Obama.

All in all you’re just a–nother…

Obviously taxpayers will end up paying, through taxes directly, or indirectly through higher prices on anything imported through Mexico and other countries against which Trump puts up tariffs. When some businesses bring manufacturing production or assembly back to the US – out of Mexico, or other countries – they will be maximally robotized with few jobs. Because, in the end, Trump is a self-serving demagogue and an old man who doesn’t care because he’ll demented, or incapacitated, or gone while the Americans he duped and their children and their children will still be suffering. He is not God, not God-like, and not God-ly. He is a friend of lies and liars and surrounds himself with lies and liars.

You should be out in the streets somewhere destroying private property. You obviously hate the idea of an American nation with a Bill of Rights for citizens.

He is ole’ redneck.

Good guess, but he’s not.

He has too long a screen name. Needs to simplify. Say “God Watch”.

1. Impose a tax on electronic wire money transfers to Mexico and all other Central and South American Countries.

2. Start charging a Toll to cross the border.

3. The IRS must start their own E-Verifcation process on the 1099 filed with them, then the states they are conceived from must pay a penalty for
not taking care of employee misclassification PROPERLY allowing loopholes. ( impose one on me , EF U) YOU ALLOW this MESS.

You think like an american citizen wishing to defend the country. The leftists have no respect for borders or the unique American culture of personal liberty. They are destroying Western Europe with their stupidity. If they succeed, they will rue the day they did because they will end up as serfs or slaves or dead.

The more I discover , I wonder
what the hell is going on , these people are college educated right , there is a difference in political asylum and economic asylum , not anymore.

9/11 happened , at work we all agreed they will seal the Border now , no it got worse.
I don’t think the wall is going to work unless we build it around our General Assembly building , then fill it with
WATER

Great scam idea. Maybe I’ll buy some random domain like LetsBuildTheWall.com and privately sell people virtual bricks that won’t ever see a speck of mortar, especially since not a single design for a wall like this involves masonry of any sort. Retirement success!

Milo, after his speech to New Mexico University students, bought bricks at Home Depot, drove to the border with some friends, and began building a wall. There are lots of ways private citizens can get it done.

Right. People from Indiana wandering onto private or tribal property in Arizona setting bricks from Home Depot on the ground randomly. I’m sure it happens all the time, and is making a real difference in the fight against illegal immigration.

What I’m much more certain of is that someone is going to P.T. Barnum the hell out of this and make a fortune. It’s a way better sell than the “International Star Registry.”

And what is wrong with some American citizens making a fortune out of that? Ever heard of pet rocks or Chia pets. As you say, a personalized brick which you can hold beats the heck out of a star on a chart which is probably only visible with the Hubble telescope.

Claiming that your personalized brick will be incorporated into a southern border wall is a deliberate lie. Claiming that your payment will physically help secure the southern border is a lie. Extracting money from people under false pretenses is criminal fraud. But TBE furthering this criminal enterprise is just fine, because the only people being harmed are conservative Mom & Pops who might otherwise donate that money to a local candidate or cause that actually could do something positive. Let’s rot the conservative movement with scams, fraud and abuse so it dies on the vine and we can help Socialism win, right?

It’s kinda a joke, a tongue in cheek post.

No, it’s malpractice. You guys are better than this.

You would rather have your government tax money spent on such an idea than take responsibility for it personally. That is a good one. By the way, the brick makes for a handy self-defense item while star registry doesn’t do much.