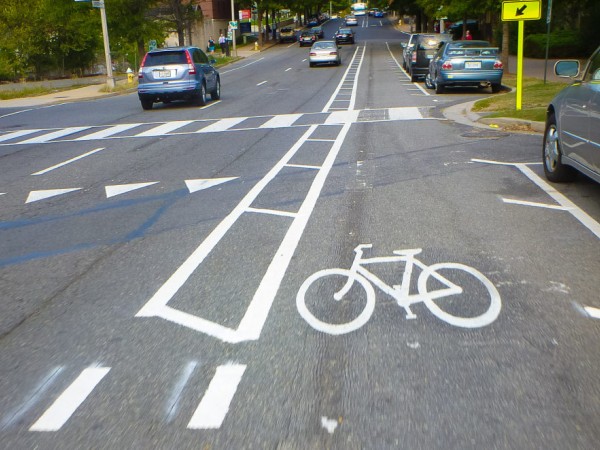 Tolling and Highway Policy Reek of Elitism in Arlington

I-66 in Fairfax County has always baffled me as the only 2-lane interstate highway to access a major city. A simple geospatial analysis I performed in Google Earth examining road conditions in America’s top ten metros show I-66 is the narrowest Interstate Highway feeding a downtown area. As Governor McAuliffe and Transportation Secretary Aubrey Lane move to seal off the district from us cheap suburbanites with sky-high tolls, many wonder if parallel collector streets and Metro busses can handle the inevitable spillover.

The top ten major metros (New York, Los Angeles, Chicago, Dallas, Houston, Washington, Philadelphia, Miami, Atlanta, and Boston) all have two or more major highways entering the central business district. Each highway has at least 3 travel lanes with two exceptions: I-78 (Jersey Turnpike ext.) and 478 in New York City shorten to 2 lanes on approach to the Holland and Brooklyn Battery Tunnels and a 0.8 mile section of I-76 (Schuylkill Expy) in Philadelphia. That section of I-76 has an Average Daily Traffic (ADT) count of 26,000 cars whereas peak morning hours alone produce that many drivers on I-66 in Arlington. The actual width of these roadways (including shoulder) are more accommodating too, where I-78 and I-76 measure 34’-36’ in length per direction and I-66 between Glebe Rd and Lee Hwy typically measure 31’-34’.

According to the VDOT website there are still no plans in place to expand or enhance Lee Hwy, Arlington Blvd or Washington St. These are the main roads that parallel I-66, and spillover from drivers who don’t want to pay over $4,000 extra per year is inevitable.

This whole process reeks of NIMBYism and elitism from wealthy Arlington government elites. Having known residents and business contacts in the county, they want to keep their government funded homestead as pristine and unfelled as possible. Numerous proposals to widen I-66 in the past 20 years have been offered only to be rejected by well-financed legal defenses. Meanwhile, lawmakers are somehow still convinced that ‘no’ means ’yes’ and we can’t wait to board their little busses and trains.

During the 5:30 to 9:30 a.m. rush, nearly 38 percent of all eastbound traffic comes from the Dulles Connector Road (Route 267), while 29 percent comes from I-66 west of the Beltway. Maddening as it is, the tolls won’t go toward road improvements; commuters are paying for bike paths and subsidizing mass transit. People in Loudoun and Prince William Counties will be paying $9.8 million for Metro Bus maintenance and bike paths in Arlington. Furthermore, for those of you who love the idea of digging your own graves, an additional $2 million of your tolls will go toward constructing the toll lane infrastructure.

Roughly $2.2 million will go into ‘exclusive bike transit lanes’ and high-tech interactive signage in metro Arlington. Keep in mind these bike transit lanes are carved out of existing roadway. An additional 16 bike share stations, some adjacent to Metrorail stations, will serve as a final trip connector from rail and bus stops. The Northern Virginia Transportation Commission claims this will accommodate 450 extra trips per day, but color me skeptical. The 77 percent ($7.6 million) of the remaining tolls revenue will fund new and enhanced bus service.

“These projects will have a significant impact, ultimately moving an extra 5,000 people through the corridor each morning,” says NVTC Commissioner Jay Fissett. Once again, ladies and gentlemen; color me skeptical.

Lived in Arlington for 35 years and watched bike lanes and traffic calming (speed bumps and lower limits, mini-islands) take control of the roads and the citizens. Bikers believe they own the bike lanes and the roads, particularly when they ride in peleton formation. I’ve seen bikers go nuclear blocking the front of vehicles, followed by roll down the window in your face cursing, when drivers make an error. Arlington has greater power over the roads because, as I recall, it maintains them, not VDOT. He who pays the piper calls the tune. Its citizens bear a heavy tax burden as a result. Commuters from outside the beltway have few alternatives and sit in traffic. That then becomes a reason to move to close in Arlington, increasing home prices and funding more traffic calming. And remember Arlington is the part of DC given back to VA by the federal
government in 1846, so you have refugees from DC’s relatively higher taxes as
well. They save some money by moving, if they can afford a house. Why do you think there are so many Metro stations in Arlington? Metro had to come through Arlington, and the county demanded lots of close to each other stations in the early 1970s as a price of agreeing to join Metro and fund it. The Rosslyn/Ballston corridor was born, and the Crystal City one as well. Now Metro has major problems, and all the stations don’t ease the burden. When I-66 was built, Arlington made it very difficult to widen it by putting bikeways and parks along it. They now rise in arms against I-66 encroaching on their amenities. A big huge feedback loop creating the “urban village” and the “Arlington way.”

Couldn’t have said it better

The bike lanes in Crystal City make for a more interesting picture. They are actually adjacent to the sidewalk. The parking is between the bike lane and the street traffic.

Yes, I’ve done traffic surveys in Crystal City, I beleive there is an overhead crossing over Jeff Davis too. Meanwhile there are no overhead crossings in Ballston or Clarendon nor is any of the 9 million planned for one.

I’m still trying to understand why anyone would choose to make a long commute for a job.

I used to make a daily run from Watsonville, CA to the Bay Area, in the 70’s. I quit doing that when I began competing for road way with people from Monterrey Bay. Eventually you come to a conclusion that if you are going to be a wage slave your employer should provide you with a shack out back. It becomes a situation of changing your line of work to afford a place
near your job… or you relocate to a new life altogether. A friend of mine traded the city for a lumberjack’s life, and later became one of those people who parachutes into the wilderness to fight forest fires.

And for those who think it’s all about career ask yourself, “What value is prestige and a self centered image at the pinnacle of your working life when someone cuts your heart out? Figuratively or literally.” Ask an old guy or gal how that works.

I commuted from Springfield, VA to DC and I hated it. And that was before the tolls

Amazing how traffic engineers take some white paint and some yellow paint and convert a comfortably wide street or highway into an uncomfortably narrow passageway as shown above in order to discourage auto traffic. Blocking off neighborhood streets always reminds me of a heart surgeon tying off arteries to reduce blood to the heart or brain which, hopefully never happens. The fewer lanes available, the longer each car is on the road making peak traffic periods longer and more congested. .

That’s the end game, to get us out of our cars and pretend it was voluntary.