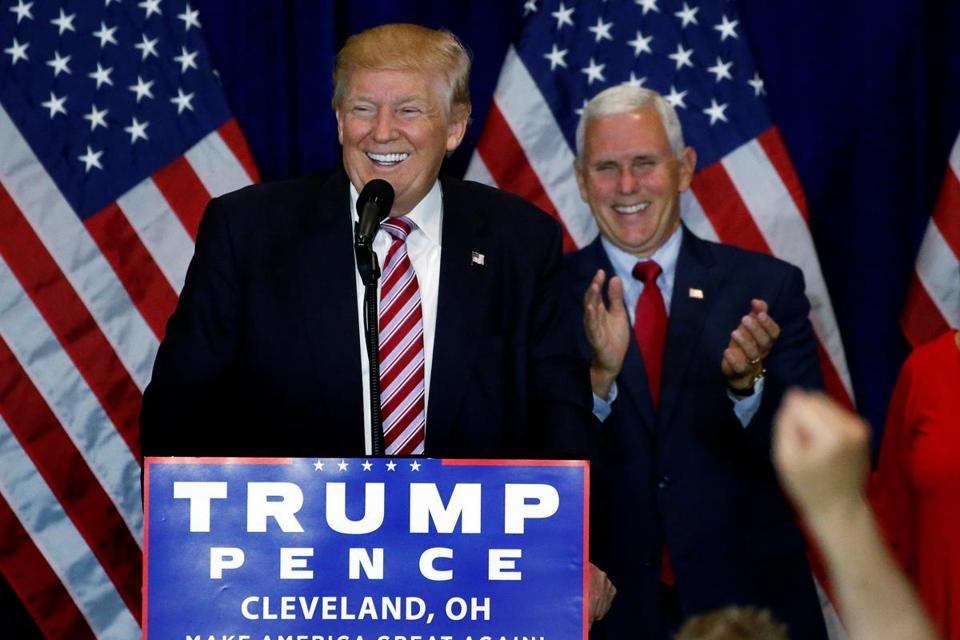 Trump Moves into the Lead in Virginia

Hampton University is out with their latest polling in Virginia and it shows a dramatic swing to Trump.

Only 34% of Virginians polled believe Hillary is trust worthy while 64% do not find her trustworthy,

This same polling organization had Clinton up by 12% in early October and she still had a 2% lead in the days before the FBI story broke. The poll was taken between October 26th and October 30th. They polled 802 likely voters.

Trump Moves into the Lead in Virginia was last modified: November 2nd, 2016 by Jeanine Martin

[…] Wednesday we posted the latest Virginia Presidential poll showing Trump with a 4% lead in Virginia. The poll came from Hampton University’s Center for […]

Looks as though Virginia republicans and the republican national committee have been caught coordinating illegally with the Trump “poll watching” nonsense.

In legal action claiming that the Republican
National Committee was illegally engaged in ballot security activities,
Democrats are pointing to a conference call in which a Republican
operative mentioned that certain GOP ballot security initiatives in
Virginia were being handled by the RNC, before quickly walking the
comment back.

“I’ve got the folks RNC has hired on — um, to help them with…,”
Virginia Republican Party General Counsel Chris Marston allegedly said,
according to a transcript of a poll worker training conference call
filed in court by the Democratic National Committee Thursday.

“I’m sorry. The RNC is not doing anything related to Election Day
operations,” Marston went on to say with laughter, according to the
transcript. The DNC, nonetheless, argued that the comment indicated “the
RNC’s involvement and obfuscation.”

The
transcript was filed in a case regarding a consent decree the RNC
agreed to in the early 1980s that prohibited it from participating in
certain “ballot security” initiatives. Democrats are claiming that the
RNC has violated the decree, which is set to expire in December 2017,
and that it should be extended for another eight years. Republicans have
maintained that have followed the consent decree, which still allows
for Republican state parties (with the exception of New Jersey’s) to
engage in the sort of poll watching activities the RNC is barred from
doing.

According to court documents filed Thursday, a Democratic operative
in Virginia, Frank Anderson, signed up on the Donald Trump campaign’s
website to volunteer as an elections observer. Sometime after, he was
contacted by email about signing up to volunteer, and was invited to
attend online poll watching training, according to his affidavit.
Anderson had his intern sign him up for a training session and he
received a number of poll watcher information materials, as well as an
invitation to a Nov. 1 training conference call, according to the
documents. He said he recorded the call, and the transcript of the call
was included in the DNC brief arguing that the court should find the RNC
in violation of the decree.

You guys sure don’t want any of that poll watching, kinda interferes with your grand objectives.

Trump moves into the lead in Virginia. And my housecat is the King of England.

Meanwhile, Trump rallies sputter as crowds no longer show up.

Trump is winning Arizona by six points now, Soros schmuck. Tell the guys at the Soros INC to give you better material to post.

Say… how are those investigations going into your corrupt bitch’s foundation, servers, mishandling classified information, corruption of government? Getting tough for your party’s political POS in the Justice Department to keep shutting them down isn’t it?

I think this crowd Comparison is funny. Hillary rent a crowd versus Trump on their own dime crowd.

Trump has to be up by at least 4-5 points to overcome all of the dead people and illegals that will be voting Democrat.

Still though, that’s a rather shocking (and awesome) turnaround.

This message is for the NeverTrump people out there. Please reconsider! I also found the Access Hollywood video to be crude and obnoxious and I wish someone would just lock up his twitter account. However, please remember that Trump is the only one who can defeat someone who from the Benghazi debacle to the private home email server casts so much doubt on her integrity. Please join us on the NeverClinton ticket and vote for Trump!

You know the Clinton camp is not happy about this news. They’ll be issuing a press release soon claiming that Trump is trying to grab Hillary’s Virginia.

Weren’t these people the polling gold standard a month or less ago, Jeanine?

When a Larry Sabbato, and his Crystal Ball say Trump is ahead, I’ll take a look at it.

RRIII, I know you don’t like Trump, but you have to vote for him. You share my concern for a borderless world. Hillary has promised this to her donors. Obama has ushered in a massive wave of illegal immigration which the press hides for him. If you tell the third world you aren’t going to deport anyone they believe you. The Democrats with their allies in the Republican party Establishment… See Bearing Drift… if Hillary is elected will end conservatism in your lifetime in short order. Unfortunately the fools at Bearing Drift are the Democrat’s useful idiots, squealing racism at you for wanting a border. Some of the fools who write here do the same. This is the issue of your lifetime. Maybe Trump is lying about this… but Hillary isn’t. She will utilize the bastards like Ryan in the GOP E and the day of her dreams of a borderless world will be now.

Until the Democrat party implodes from their success at changing the voting Demographics, they will rule with an iron fist… Virginia is almost blue now. North Carolina too..

As far as I know, I am now the only one who is banned from BD under their new covenant. It would be interesting to see Trump win, basically giving BD the finger. I feel certain both Shaun and Schoeneman are well versed in being on the receiving end of “the finger”.

And by the way I was banned for questioning the $10,000 that Schoeneman’s union PAC threw at Comstock. And the “puff” pieces Schoeneman has written about Comstock. What have you done for the SIU Barbara?

It’s pretty bad when you can’t find any ads to read over there, and most comments are by the staff.

Their heart isn’t in it anymore, and it’s just too painful to peruse.

You should get yourself prepared, my crazy, skeptical friend! This poll over sampled women by 4% and demwits by 5% and The Donald is still ahead by 4%. How do you like them apples?

Only a democrat would put faith in Larry Sabbato! He’s so far left it’s a wonder he doesn’t fall right over!

Bull, he is a right winger for Fox. Where did you ever get that from?

I have followed him for years and heard the vicious, nasty, lies he told about George Allen and others. It’s well known around the campus that he is very far left. My son went to UVA.

Ok, he is a Democrat. A Fox News Democrat? But still, in 2012 he underestimated the Obama win according to Wiki.

This is about sucking advertising dollars out of Trump and Clinton. It’s all ratings, corruption, media money. I still look for somebody to throw out some trash they been saving on Trump. It’s just his turn now. The media is not finished yet.

He’s not a Fox News anchor but an occasional guest, like hundreds of others. He does not work for Fox News.

Fox News has hired Juan Williams. Is he too a Republican?

It is hard to find a conservative in the colleges of journalism, sociology, political science and the liberal arts. UVA is no different and if you doubt that jus remember they got caught up in believing the bogus Rolling Stones rape article. I wonder how much they paid off the fraternity viciously attacked and abused. Hope it was or will be big bucks.

Remember what he used to say about Chuck Robb?

Larry’s not my cup of tea, but he is usually fairly accurate with his predictions.

By the way, he has also been incredibly generous to his employer, The University.

I do not intend to vote for Hillary.

FBI story broke at just the right time. Voters already were moving away from Hillary. If Trump can manage to stay off Twitter through tomorrow, we might have a chance to avoid Hillary.

More FBI investigations information came out today! Hillary’s computer was hacked by FIVE different foreign countries! She’s an idiot and a danger to our security!

ha… got a chuckle out of staying off Twitter.. someone should take that cell phone away from him.

The only way to get rid of the Clintons and the corruption they foment is to spew them out of politics and never let them back in.