Despite the mainstream media’s beating on Trump over the last few weeks, he is holding his own in two key swing states and down in only one according to the latest Quinnipiac poll. Â In Ohio the candidates are tied with each receiving 40% of the vote. Â In Pennsylvania Clinton is ahead by only one point, 42% to 41%. Florida is the only bad news, there Trump is down by 8%, with 47% for Clinton to Trump’s 39%. Checking party affiliation in Florida’s sample it is almost even between party identification:

However, that was not true in Ohio where they over sampled Democrats by 7:

Had the sample been equal between Republicans and Democrats Trump would be leading in Ohio.

In Pennsylvania Democrats were over sampled by 4%:

The poll asked many other questions of voters and those can be seen here.Â

In the latest CNN poll Clinton leads 47% to 42% nationally but 22% say they could change their minds between now and November. Â With Johnson and Stein in the race, Clinton holds 42%, Trump 38%, Johnson 9% and Stein 7%.

Comparing the polls from a month ago, Clinton is clearly declining in some key areas: 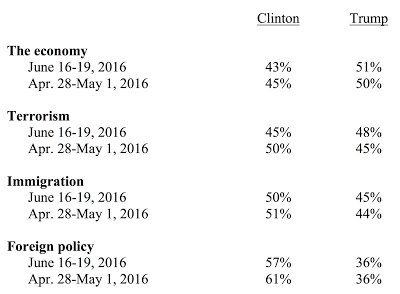 Clinton is behind Trump on the two key issues, the economy and terrorism.

Republicans got their dream opponent this time around.

Sometimes I am a bit skeptical of polls…

And, as always, with himself.