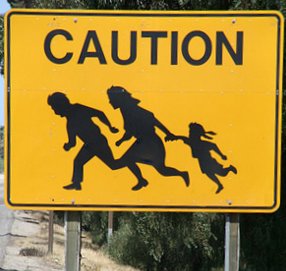 2.5 Million Illegal Immigrants Enter the US Under Obama

According to the Washington Examiner during Obama’s Presidency illegal immigrants have entered the US at the rate of 400,000 a year, with 790,000 having entered the country since mid-2013.[read_more]

With these huge numbers of illegals rushing into the country, is it any wonder why Trump is now the number one choice for President among Republican candidates?

Some highlights from a study done by the Center for Migration Studies and the Pew Research Center:

— Prior research indicates that roughly half a million illegal immigrants return home on their own each year, are deported, die, or get permanent residence. Those who get legal status each year are not beneficiaries of the president’s administrative amnesty known as DACA — which does not give permanent residence, but does provide Social Security numbers, work authorization, and identity documents. Rather it has been long-standing policy to allow those who violate immigration laws to still get green cards (permanent residency) if they qualify in one of the legal immigration categories such as marrying a U.S. citizen.

Why is The Donald the only Presidential candidate who is addressing this rather large problem in a way that resonates with voters?

We’re all waiting for the candidate who gives us the solution to the problem.

2.5 Million Illegal Immigrants Enter the US Under Obama was last modified: July 21st, 2015 by Jeanine Martin

I have never met someone so full of it in my life, Jeanine.

“Our country is paying a huge price for this influx of poor people from Central America.” You have got to be joking. These are people risking their lives – and many, I assume, are good people – for the hope of a better life. All you ever did was belittle them on your blog, in the comfort of your living room, over a $65 bottle of Merlot.

If any President wants to kick the illegal’s out, he/she will have to do it by executive order. Then, he/she will more than likely be sued by the establishment Republican’s.

Congress is not going to do nothing about nothing.

Two interesting pieces of information which I am sure all TBE subscribers know.

First, is Ben Franklin’s warning to us, “When the people find that they can vote themselves money that will herald the end of the republic.”

Second, is the revelation that our fastest growing demographic, Hispanic immigrants, which is disproportionately poorer, lower educated, and on welfare much more often than European and Asian immigrants, WANTS BIG GOVERNMENT. http://www.pewresearch.org/daily-number/hispanics-favor-bigger-role-for-government/ In short, they will use the Democratic Party to vote themselves more benefits, and there is no way that Republicans can out Hispander Democrats. None. Anyone who entertains such a notion is only deluding himself or herself.

So, we are inexorably nearing the stage of which Franklin warned us. The end of the Republic is near, and there is not any Republican who will pull us from the precipice. If I hear the usual pablum on immigration from the current crop of GOP candidates, I will search for a third party, one that at least recognizes the peril we are facing and is willing to advocate measures which will preserve some semblance of Western Civilization on this continent.

The Obama administration’s attitude and quasi legislative executive actions has pushed this argument way past any debate of national immigration policy or constitutional interpretation and placed the issue squarely in the context of national defense and the modern definition of American statehood. This has become and is an “open borders” policy that functionally exists no where else internationally in any modern existing nation state. We may still have the apparent residual agency enforcement apparatus but none of them are performing their orginially intended mandates. Obama has intentionally stood down the entire process except for the judicial backbone of a single Texas judge in the Fifth U.S. Court of Appeals this might well have been a fait accompli. To have a meaningful debate you must first understand the topic under consideration and have the courage to squarely face it and present your arguments. The Republicans have had ample opportunity to undertake this effort but not the political will. I expect nothing out of the Republican presidential primary debates from the mainstream candidates but more useless poll tested talking points. I hope I am wrong.

The debates will require each Republican candidate to articulate solutions to our serious immigration problem. Each candidate must now be formulating positions that are practical, humane and in the interest of our existing population. I hope we also hear a call for a return to being a nation of laws that are enforced.

Donald Trump isn’t the only “candidate” addressing the issue. He’s the only one calling Mexicans rapists and criminals. Small wonder the type of voter with whom that resonates.

The criminals are the ones in our government who refuse to enforce our existing immigration laws.

You got that right! Most of the squishy establishment types are talking about “acts of love.”

Apparently it’s a quarter of the voters. He’s now leading in the polls. You can look down your establishment nose at those 24% of the voters, along with the elitists on the other democrat side, but it won’t help you win elections.

Why do you care about winning elections? You’ve already explicitly said your priority isn’t electing conservatives, but ridding the party of people who disagree with you.

What an absurd thing to say. I’ve never said anything like that. My goals remain the same, to elect conservatives who can carry our vision of America forward.

“You are correct. I do not view winning as the most important thing. Sometimes real change involves hitting bottom first.” – Jeanine Martin

What’s that got to do with conservatives? I want conservatives to win. I will not vote for ‘democrat lite’ candidates. Winning with them is not the most important thing. Wining with real conservatives is. I don’t know how to make make this any more simple for you to understand.

It is simple: if a conservative disagrees with you, they are “Democrat-lite” and you want to drive them out of the party. That is more important to you than winning elections. You’re proving my point here, Jeanine.

At any rate, you said you want to see the party hit rock bottom, and you’re helping it do so with your supportive coverage of the pro-choice, pro-Hillary Donald Trump. And I’m not surprised in the least that there’s 24% of people in the Republican Party who share Trump’s racist views on immigration.

So, now if one wants to enforce laws, they are racist?

From a middle-class point of view, what good is it to have the establishment Republican’s? (slave owners)

Might as well vote Democrat. This problem is not going to go away anytime soon. Trump has quite easily captured the early lead with just a couple sentences.

Absurd. Most voters know the difference between a conservative and Jeb Bush. I bet even you know the difference.
I report the news on Donald Trump. He is not my choice for President. Why is this so difficult for you to understand?

What is absurd, or even certifiable, is believing that Jeb Bush is a “Democrat-lite”.

And you keep on saying Trump’s not your guy, yet you keep fawning over him. I think it’s just a matter of time.

I have read that southern California especially Los Angeles is now no different than third world or close to it. I put off a trip out there as I have read blogs stating pretty coastal areas like Monterey etc are overrun and they are scary/hostile. I believe this will be everywhere unless we get a man in office with the fortitude to stop it. Who is that candidate???

Don’t believe everything you read. I spent some time in Monterey and Carmel last summer and they were beautiful, lovely places to vacation.

Be careful, you are talking about the cheap labor force that the Chamber of Commerce and them squishy establishment types have been championing.

Spot on they both stink { R and D } and are not Patriotic or loyal to Americans about it.
I bet Virginia Republicans leave the Employee Misclassification loophole for Unlicensed Contractors / illegal Aliens.
Not One is speaking about it now , lame Reps.
Letts all 1099 the illegal and blame Obama, stupid .
If Republicans want to lead Nationally , show us what republicans do to combat it in their States. A proving ground if you will.