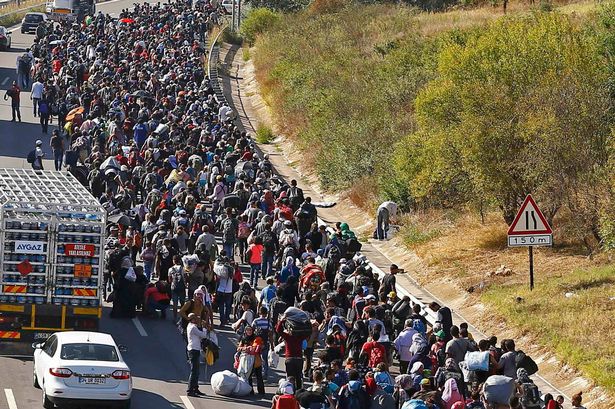 Rome was subject to six invasions, the worst of which signaled the decline and eventual fall of the Roman Empire hundreds of years later. Are there lessons from Rome that might apply to what is happening in modern Western Europe? Here are some thoughts on historical parallels:

As ancient Rome expanded its empire, it became difficult to man its legions with Roman citizens. As a result, Roman legions incorporated people from conquered tribes and often rewarded them with important leadership positions. Modern Western Europe, with its ever-expanding welfare state and suppressed population growth, has found it difficult to man its corporations with native citizenry. As a result, many European nations, particular from Western Europe, imported a workforce from nations like Pakistan and Turkey.

When ancient Rome dominated the western world, its progressively dictatorial leadership built a welfare system to placate the average Roman citizen. Although business and trade still thrived, there were many in Rome who preferred to live under State largess where bread and circus became part of daily life. Modern Europeâ€™s welfare state is not unlike that of ancient Rome, except what was originally intended for its legal citizenry is now becoming welfare for refugees and migrants. Significantly, the overwhelming majority of legal and illegal immigrants end up on welfare, all too often at the expense of the native citizenry.

As ancient Rome began to decline, barbarians demanded tribute in treasure and slaves. The Romans paid the tribute, but eventually the barbarians just decided to invade and sack Rome. There was no resistance, as Rome had no effective military capability with which to fight. Modern Western Europe is putting up no resistance to invasion. Their borders are porous. Their police, unsupported by the globalist political class, are swamped – and terrorist attacks are a regular feature of life. Unlike what happened in ancient Rome, the sacking of modern Western Europe is slow moving, however the result is going to be the same if nothing changes.

The aftermath of the sacking of ancient Rome was a substantial loss of native population. Ancient Rome, at one time a city of over a million people, declined to as little as a few hundred before rebuilding. Modern Western Europe is beginning to experience the flight of the native populations. Jewish citizens are once again fleeing Europe and many other native citizens are abandoning their cities and even their nations. What is left is growing enclaves of â€œno-goâ€ zones where national authorities fear to go. The difficulties in recruiting and retaining police, healthcare professionals, and educators are noticeable throughout Western Europe.

Ancient Romans considered themselves civilized and those outside the limits of the Empire were referred to as barbarians. Eventually, the barbarians won because the civilized Romans were unable and unwilling to maintain civilization. A governmental policy of â€œBetter to appease than fightâ€ led to the end of Rome as a world power. Modern Western Europe has not learned the lesson that appeasement doesnâ€™t work. They are facing a clash of cultures and they are losing. Is it too late to relearn the lessons of history? Rudyard Kipling, in his famous poem â€œThe Gods of the Copybook Headingsâ€ ends with the following:
â€œWhen all men are paid for existing and no man must pay for his sins, ——————————-
The Gods of the Copybook Headings with terror and slaughter return!â€

There is a great video on the vladtepesblog done by German women. It is translated with subtitles.

The only solution for Europeans is to expel Islamic populations from their countries. And if Americans don’t want the same chaos as is now ravaging Europe, then they need to smarten up real fast.

I have been to Turkey, a ‘secular’ Islamic state. As a Christian, there is no way I would want to life under Islam, not a secular Islamic state and most definitely not under Sharia. I have been seen first hand what immigration has done, is doing to Italy. In Pisa I nearly got into a fight with an African who insisted in getting physically into my face. You have to see it to believe it. These migrant populations do not want to assimilate. They mean to conquer … first demographically, and then when with numbers, by imposition of force.

If I recall the story, these two little girls were to meet allah as successful suicide bombers. Their father was proudly displaying them pre-martyrdom.

The father is a member of al-nustra front in Syria. Barry and Clinton have been sending money and support to this group. The two girls 7 and 9 were sent on a suicide mission.

This defines the evil and hate that is Islam. Religion of peace ?

Nothing justifies this evil.

Also to be fair the Muslim religion strictly forbids this type of activity. A number of groups around the world use children as human bombs. As far as I can tell, all of the groups are muslim..

Since women and girls are the lowest of the low in the Islamic hierarchy their use is whatever the Muslim adults males want. Only infidels are lower.

It is hard to fathom that a father would use his baby girls as cannon fodder, but there it is and it happens regularly.

Now I am finding conflicting reports about all of this.At least one little girl was used as a human bomb to attack a police station. Uncertain about additional children and attacks at this time. https://uploads.disquscdn.com/images/4a99af18f29ee9fca21fbc53e5ca148a011ed73452e8405f12bf170a6dec9bb6.png

Ah! I had no idea! If true, how Satanic!

Thank God the Far Right is on the rise and breaking free of the chains of political correctness. The analogies in this article are all apt, with one HUGE exception. The so-called barbarians of the late Roman Empire were mostly Germans, and no one is better at warfare man for man – now and back then – than Germans. Thus, the German “hordes” in the 4th and 5th centuries were militarily capable of defeating Rome. Today’s hordes from Africa and the Middle East could not fight their way out of a wet paper bag. That is where the historical analogies fall flat. Once West Europeans are determined – they need only look at their more determined cousins in Warsaw, Prague, Budapest, etc – they can easily send these invaders home. It will not be pretty, but it will be necessary, if Western Civilization is to survive in Western Europe.

The question, of course, is whether the leadership has the wisdom and courage to do what is necessary. As pointed out in this article, the ancient rulers of Rome did not have much in the way of wisdom or courage, and succumbed to a more dedicated military force. It isn’t always about superior technology or numbers but about will. So far, Western Europe’s leaders have only shown the hand of appeasement under the guise of tolerance and social justice. Further, by suppressing any dissent, the opposition to appeasement has been neutralized – so far.

By the way, the Gods of the Copybook Headings are wise sayings and proverbs. Children learned penmanship by copying such sayings and proverbs as well as the wisdom from them. It is a real shame that penmanship is a lost art and that wisdom and law has been made secondary to the emotional commitment to social justice.

Nice explanation of the Gods of the Copybook Headings that even a dumb rino like me could understand.
.
.
.
http://www.fletcherarmstrongblog.com/the-gods-of-the-copybook-headings/