The definition of a con is someone who cheats or uses tricks to accomplish their mission.  It seems that is what we have going on for the Henrico GOP Mass Meeting on Monday, March 24th. I have known Delegate Jimmie Massie for a long time – before he was even an elected official. He and I have always gotten along splendidly and he has put forward some solid legislation, but it appears that he is on the wrong side when it comes to slating off conservatives who want to attend the Republican Convention and vote for their preferred nominee. Furthermore, it appears that he has no compunction about using con game tactics to achieve his goal.

Delegate Massie sent out an email tonight to his supporters asking them to attend the GOP Mass Meeting on Monday, March 24th, because there are some people who “want to take away your voice in party elections by eliminating primaries.  Now is the time to fight back.” 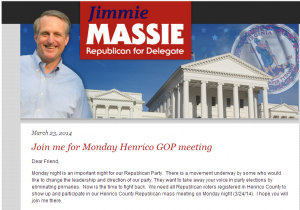 This level of deception is really egregious on two levels:

As a Republican Party we have always strongly opposed voter fraud and voter deception. It seems outrageous to me that we have Republicans calling and emailing their supporters to ask them to come vote for/against a primary versus convention – when they are ACTUALLY voting to remove the voting rights of hundreds of properly filed grassroots activists who only desire to cast their vote for their preferred candidate in the upcoming Conventions that are already scheduled.

So, if you are attending the Henrico Mass Meeting on Monday, March 24th, make sure you know what you are actually voting for and don’t get suckered by the con game. It would be really sad if you thought you were voting to protect your voice and voting rights, when you were actually voting to disenfranchise hundreds of other voters in your county.

I have made calls to all my supporters in Henrico and strongly encouraged them to attend the Mass Meeting to make sure their vote is not taken away (and my statement is actually true!). We need everyone there to block this power play by the Establishment.

You do not need to be a current member of the Henrico Republican Club to attend the Mass Meeting. All registered voters in Henrico County are free to attend and vote. Of course, we don’t want you there if you are a Democrat!

The mass meeting is this Monday evening at the Henrico County Government Center, located at 4301 East Parham Road, Henrico, VA.

And as Jimmie Massie said, “Please arrive between 6:00-6:30pm in order to properly register for the meeting.”

UPDATE: Senator Bill Stanley, who is part of the Senate Republican Leadership, has just issued a statement (March 23, @11:10pm) on Facebook against this abhorrent slating practice that Delegate Massie is proposing to his supporters- relatively soon after our blog post here. He joins a long list of other elected and party officials like RPV Chairman Pat Mullins, Congressman Scott Rigell, Ed Gillespie, Shak Hill and others who oppose slating. Senator Stanley really doesn’t mince words…. 🙂

UPDATE 3/24/14 11:40pm: I had a conversation with Delegate Jimmie Massie after the Henrico GOP Mass Meeting was over tonight. He shared with me that he was not happy with the language of his email. It had been drafted by someone else and sent out without his careful review. He stated he would have altered the language to make it clear he was not proposing slating. So…there you have it. I’ve known Jimmie for a long time, so I will give him a mulligan on this one. Thanks for clarifying, Jimmie.

Reply
Senate Candidates, Other GOP Leaders Speak Out Against Slating - The Bull Elephant March 24, 2014 at 3:34 pm

[…] this, staffers of YG Virginia are privately bragging that their deceptive efforts (the kind detailed here) will “crush” the grassroots opposition tonight in Henrico. And that will be a real […]

The point of this article is about the despicable practice of slating that is going on in counties across the Commonwealth and not who is the most libertarian. Jimmie Massie and now John O’Bannon are sending out these “scare” letters, creating a straw man problem where there is no problem. It’s the siren call of Eric Cantor deceiving and misleading otherwise good people. Cantor, who won’t fight Democrats in his elected capacity, is feeling like a big man strong arming conservatives and grassroots Republicans.

“The definition of a con is someone who cheats or uses tricks to accomplish their mission.” As in the deliberately misleading smear campaign you took part in against Robert Sarvis?

torche…is that your first name, last name, or other? Or is it your complete name, like “Sting” or “Cher”?

Douche? maybe he made a typo?

Now now…no need for that. I’m generally not a fan of people using fake names for this kind of debate. If one’s words mean something, stand by them.

If Sarvis is a Libertarian , Obama is a Moderate Conservative…. I know many Libertarians that refused to support Sarvis because they knew he was bought and paid for by the progressive jerk from Texas. Cuccinelli was more of a Libertarian than that LINO Sarvis. Sarvis gave VA Libertarians a bad name….

The only people that think that are Republicans. The only fake libertarian in the race was the conservative pretending to be one.

Please keep comment language here on the safe side of family-friendly.

Robert Sarvis. You mean the Democrat funded “plant” who took enough votes to ensure McAuliffe’s election? Sarvis, whose petitioner signature collectors were financed by the Texas Democrat? Yeah, I guess you meant that Sarvis. BTW, a libertarian Sarvis isn’t…at times he sounded like he was right out of the Democrat bag of lefties.

Somebody else, like Glenn Beck, who didn’t do their homework

Yep. There’s a reason Ron Paul endorsed Cuccinelli (and nearly ushered him to a win). Libertarian policies don’t look like Sarvis’ platform at all. Sarvis was actually running on a fairly hackneyed “moderate Republican” platform – left leaning on social issues, centrist on economic ones. There was little to nothing in Sarvis’ platform to appeal to an actual libertarian; the only point in anyone voting for him was to get the Libertarian Party automatic ballot access. I’ve never even heard of a person who voted for him because they thought he’d make a good Governor or liked his policies – a Sarvis vote in 2013 was pure realpolitik.

Actual libertarianism isn’t a mash-up of policies, it’s a consistent philosophy, which was best expressed by the principles in the Declaration of Independence. All men are created equal, and endowed by their Creator (and NOT their government) with inalienable rights.